In any case, the customers who bought and paid for OUYA hardware are getting a couple of dividends out of the deal. First, they can take a sweet $50 discount off of the Forge TV-and-controller bundle, bringing the total price down to $100. (You could also think of that as getting the controller for free, which is actually a pretty sweet deal. It's $80 as a stand-alone purchase, and it also works with Android phones and tablets.) OUYA owners also get $10 of free credit for Cortex, Razer's new semi-exclusive Android game store. Stop me if you've heard this one before. Razer's Cortex includes many of the games that were available on the OUYA store. 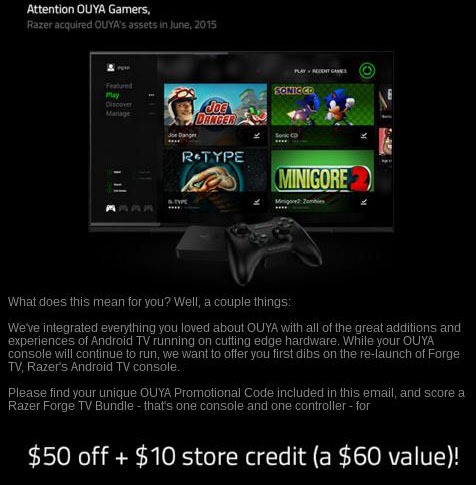 OUYA owners can also use OUYA's branded controllers on the Razer Forge TV, which will save a ton of money for those customers that have already invested in them. OUYA customers should be receiving an email from Razer with a promotional code that they can apply to the RazerZone online store to claim their Forge TV bundle discount.

WSJ: Google Is Building Another Messaging Service... With Chatbots [And Blackjack, And Hookers]

YouTube Has A New Pseudo-Drawer For Subscriptions On Tablets