Android is many things. A mobile operating system, a tool for smart watches and set-top boxes, and much more. But one of the things it most certainly is not is a desktop OS... at least in its current form. That said, it's also the world's biggest piece of open-source software, so when Jide decided to make what it calls "the world's first true Android PC," they were more than free to do so. Whether or not it's a good idea is a subject for discussion... and this review.

With the Remix Mini, you get a tiny Roku-sized box that, at least technically, works like a desktop PC. Plug in a monitor or television via the standard HDMI port, add a mouse and keyboard (either via USB or Bluetooth), connect it to the Internet via Wi-Fi or a standard Ethernet port, and you're good to go. 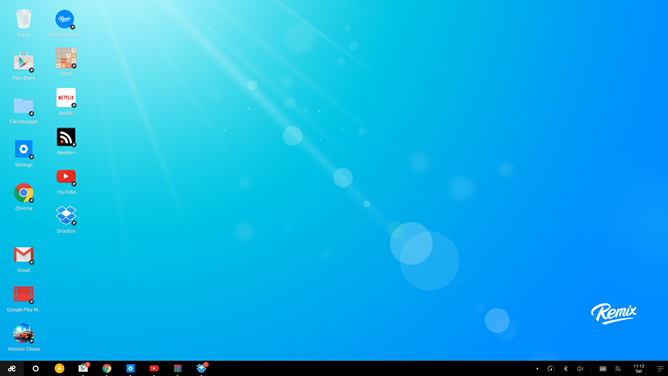 And as odd an idea as an Android-powered desktop might seem like on the surface, the Remix Mini manages to be much more than the sum of its figurative parts, thanks to some impressive work on the software. Jide has successfully adapted Android into a keyboard-and-mouse interface, or at least much more of one than any previous attempts, like ASUS' Transformer tablets.

Unfortunately, the Remix Mini is almost exactly the sum of its literal parts - even for its super-cheap $70 price tag, the performance is objectively terrible. It might do for a guest machine or a somewhat underpowered set-top box... but unfortunately, there are other devices that fill both roles effectively, for comparable prices.

The Remix Mini looks quite a lot like a Roku. Or a Nexus Player, or an Amazon Fire TV, or any of the other vaguely interchangeable hockey pucks that hide behind your TV. The difference is that this one is intended to act like a desktop computer. Around back are an HDMI port, two standard USB ports, a headphone/microphone jack (though audio through HDMI works as well), a MicroSD card slot, and a proprietary power port. 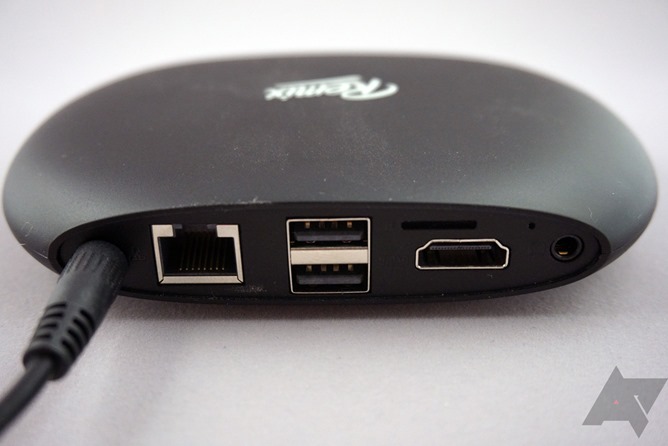 There's no power button on the device, at least not at first glance. The printed logo on the top hides a capacitive button - just tap it to power the gadget on or off. Other than that, it's extremely nondescript. You can hide it behind a desk or monitor (with a little tape - there's no mounting solution), or even slip it in a pocket for travelling. You'll have to fill the other pocket with the power and HDMI cords, and since you're bringing a bag for the mouse and keyboard, you might as well put it all in there.

Crack open the plastic and you'll find specifications that completely fail to wow. The Remix Mini is based on a 1.2GHz quad-core 64-bit SoC from Allwinner - not the most auspicious start. There are two models advertised on Jide's site, one with just 1GB of RAM and 8GB of storage, and the other with 2GB and 16GB, respectively. The only one being sold on Amazon is the latter, for $69.99, and it's the one we were sent to review. You'll also get Wi-Fi, Bluetooth, and Ethernet support. 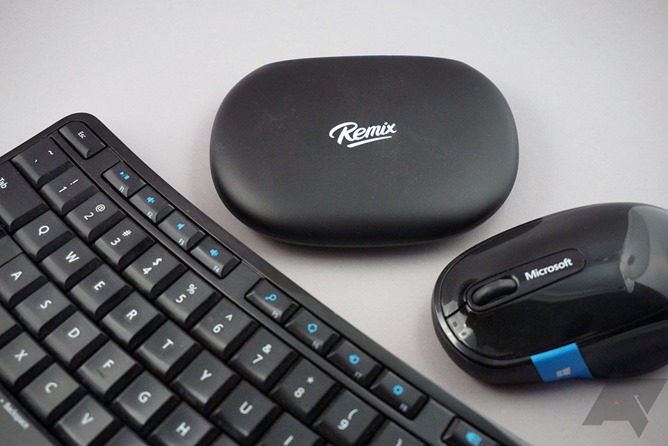 Even for the low price, the specs are underwhelming. With no battery, screen, mobile radio, et cetera, I would have expected some of the more core specs to be better. I understand that Jide was going for the absolute smallest price possible, but it comes at the cost of performance - more on that later.

Remix OS is what Android would be if you tried to turn it into a PC with a mouse and keyboard UI. And considering that the developers needed to tweak or rewrite very nearly everything at the core of the operating system, it's actually quite impressive. Remix's interface runs on top of Android 5.1, and despite some of the extreme changes, includes full access to the Google Play Store and other Google services. 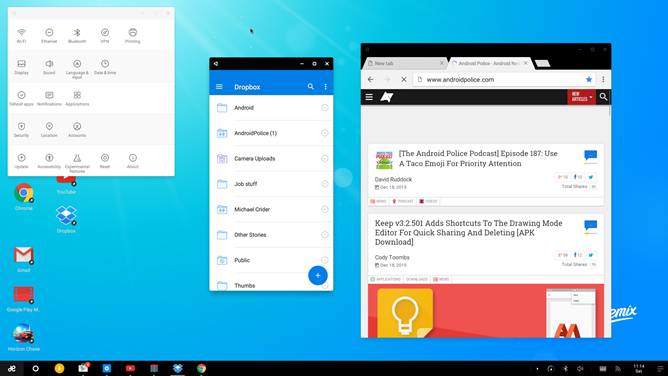 The desktop is, well, a desktop. It's an impressive copy of most of the paradigms that Windows users will be familiar with. Windows is definitely the template here, not OS X, any flavor of Linux, or even Chrome, with the main "start" button on the lower-left corner, a taskbar full of currently-running apps, and a set of tools in the lower-right. 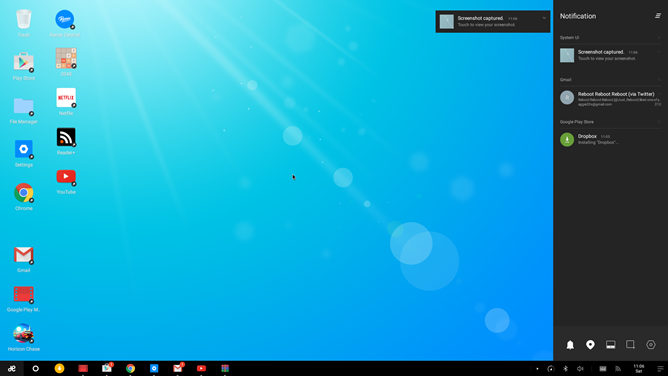 Each Android app opens as its own window, which can be dragged around, resized, and generally messed with in a familiar way. My Microsoft keyboard and mouse set played nice with the UI; the Windows key opened the start menu, most of the familiar keyboard shortcuts worked, even the semi-proprietary media controls were functional. Windows can be opened and closed in the usual way, and apps downloaded from the Play Store work as you'd expect them to. Up to a point, anyway - obviously the transition from a touchscreen UI to mouse and keyboard has a few hiccups.

Starting up Remix OS for the first time is a bit of a chore. My review unit immediately needed a software update, which took the better part of two hours. And if you have a Bluetooth keyboard and mouse ready and waiting, you might need to grab something else: there's no way to connect Bluetooth accessories before the initial setup for Remix and Google's services, so you must have a USB mouse at the very least. 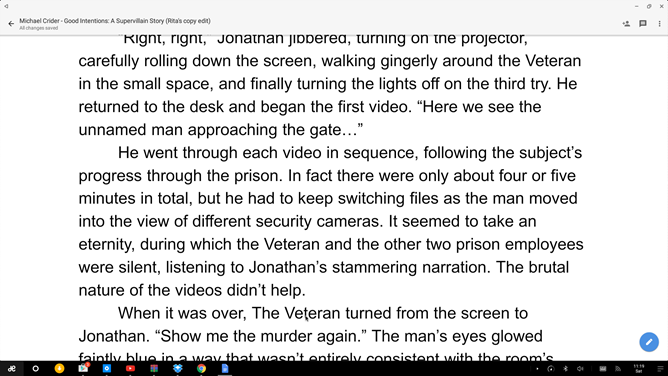 Once you start to actually use the device, everything sort of falls into place. You might almost believe you were using a heavily-skinned version of Google's Chrome OS, but Remix has the advantage of access to the full complement of Play Store apps. Resizing and repositioning, including fullscreen view, is possible in every app.

That said, the apps usually launch in their ideal forms (usually utilizing a tablet interface), and manually resizing them is awkward and often results in worse use of space. The intersection between the windowed apps and the total desktop UI can be awkward as well - for instance, clicking the "fullscreen" button in the YouTube app will make the video extend to the edges of the window, but then you have to click the fullscreen button on the window itself to see the video as large as possible. 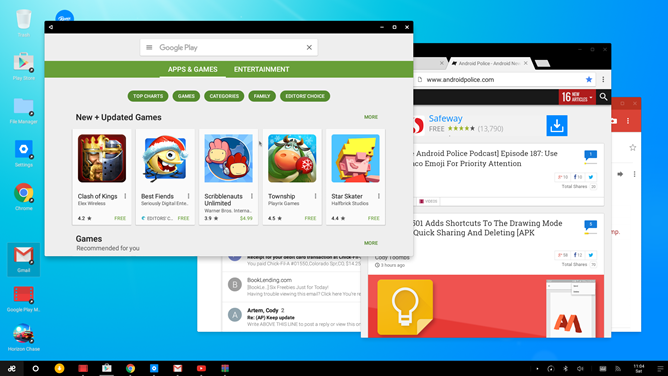 Clicking on the hamburger menu on the far right of the taskbar will open up the notifications in a fashion very similar to Windows 10, though you also get a peek at them as they come in, Lollipop-style. The desktop UI doesn't lend itself well to widgets, which is probably why you can't put any on the main screen - if you want to see them, you'll have to click the Start button, then click the Widgets button, at which point an OS X-style screen used only for the widgets will appear.

A final note: at the moment Remix works only at resolutions of 720p or 1080p. That's fine if you're planning on using the Remix Mini with a TV or a cheap monitor, but if you have a 16:10 or 4:3 ratio screen, the image will be stretched out with no real fix. 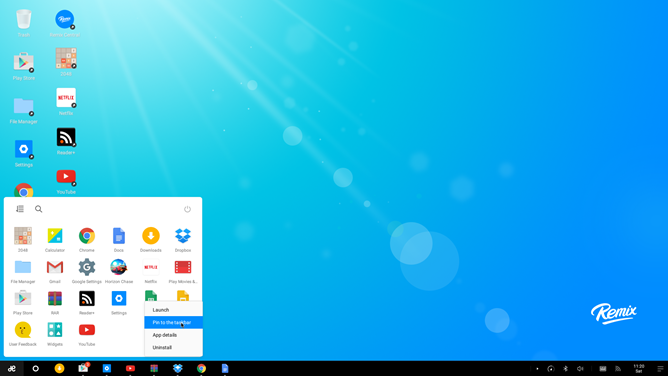 Other than that, you'll be getting everything from the Play Store or from manual APK installations, even some ubiquitous apps like YouTube and Netflix. And this kind of works, if only because Jide seems to have intentionally made the core operating system as minimalist as possible. Though Remix OS is not too difficult to get into, the usual mishmash of manufacturer bloatware wouldn't help.

The Remix Mini runs like its trying to swim through molasses on a high-gravity planet. It's not the only problem with the relatively novel hardware and software, but it's definitely the deal-breaker for me. Just getting Chrome to open a page can be a pain, and just about every action on the device takes several seconds to complete. 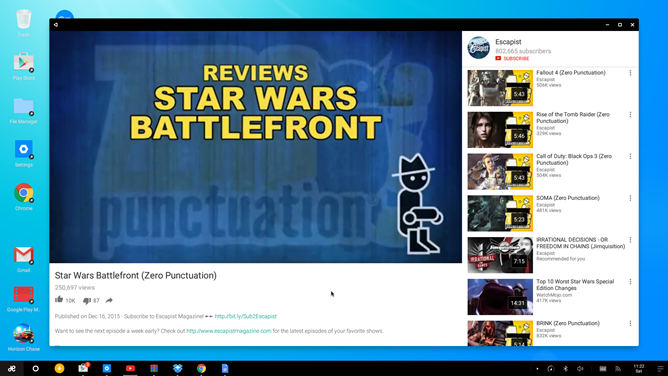 Video is jittery with errors in sound playback (so forget about using this as a media player), and high-end games simply will not run. Even simple games like 2048 stutter and chug. And keep in mind, this is on the better of the two configurations, with 2GB of RAM - I can only assume that the 1GB version is much worse.

The focus on an interface that's more complex than standard Android, and is designed to allow reasonable multi-tasking, is probably the reason for this slow performance. And I don't want to be too hard on the Remix Mini, since it is offering a combination of hardware and software that's fairly unique. But the fact remains that this kind of performance would be damning even for a budget phone, to say nothing of something that bills itself as a desktop PC alternative.

The Remix Mini is cool. It's like a Raspberry Pi for people (like me) who couldn't program their way through a decoder ring cypher. And Jide deserves points for their software, which expands Android in ways that simply can't be found on any other product. 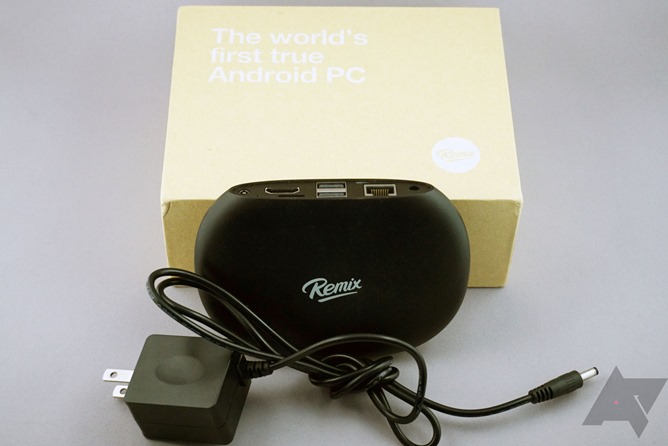 But unfortunately, that software still has a lot of little kinks to work out before it feels like a "real" desktop OS. And on top of that, the bargain bin hardware inside the Remix Mini makes it screech to a halt when it's trying to do, well, pretty much anything.

If you're looking for a sub-$100 desktop, you'd be better served by a Chrome-powered gadget like the Asus Chromebit. If you're looking for a set-top box, any of the various Roku designs is an easy pick. If you want a tiny Android-powered desktop machine, you might want to check out Jide's products... in another year or two. The Remix Mini is simply too unfinished and too underpowered to recommend.

Android Police's Team Picks: Our Favorite And Most Used Apps In 2015