Netflix is a pretty straightforward service, but sometimes things go wrong. Whether it's trouble with accounts, billing, or stuff failing to stream despite a strong Internet connection, occasionally folks need to ask for help.

The latest update lets you place calls directly inside of the app. This was a feature we saw listed as "coming soon" in a previous changelog.

Since the call is VoIP using your account, you will need decent Wi-Fi or cellular data. But you're using Netflix, so that much is a given. When you press the big, green CALL US button, the app will prompt you for microphone access (if you're using Android 6.0, otherwise it will get permission when you install/update). 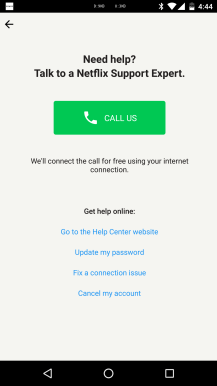 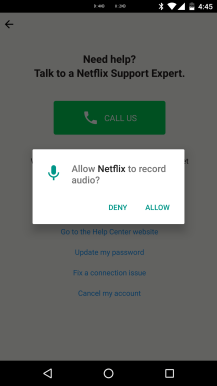 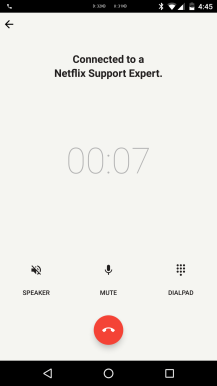 During our test, the audio switched from regular to speakerphone a few times. After manually setting the app to speakerphone, it was consistent long enough to talk for ten seconds with whomever picked up before the call ended. The line sounds like it was dropped, but hopefully this was a fluke. The only thing worse than a dropped call is a dropped support call (well, that, soggy cereal, and stubbing your toe).

Here's the changelog. The feature is rolling out fresh, so let's keep that in mind.

The Sprint LG G4 Starts Getting An Update To Android 6.0 Marshmallow