When the Saygus V2 smartphone (or "V Squared") was announced back in January of this year at CES, it was not particularly premium, it was not particularly interesting, and it didn't even seem especially impractical to build. It was a high-end-ish Android smartphone with dual microSD slots that allowed Saygus to claim it could have up to 464GB of storage using two 200GB SanDisk microSD cards coupled with the phone's 64GB of internal NAND. That, along with dual SIMs, was basically the entire pitch. It has an old processor (Snapdragon 801), a standard 5" 1080p display, 3GB of RAM, and will run Android 5.1.1 (at the time, it was on KitKat). At this point, it is literally not exciting. It's just an average-ass phone that inexplicably costs $600 despite being absolutely spanked in almost every regard (i.e., except storage) by a Nexus 6P that is $100 cheaper.

The V2 didn't officially become "crowdfunded" until a launch on Indiegogo in June, but that launch made it abundantly clear that Saygus' pre-order site was little more than a glorified crowdfunding campaign in disguise. The campaign also made itself look far more successful than it was by including the Saygus website pre-orders in their campaign totals (starting them at $800,000 or so of their $1,000,000 "goal"), essentially deceiving crowdfunders, but also implicitly suggesting the company was relying on "pre-order" money to actually build the damn thing which, by definition, is crowdfunding. The company still managed to net north of $500,000 in additional funding from IGG, and claimed at the time in June that the early pre-order phones were "already being assembled."

If it wasn't an outright lie (and I have no specific evidence to say it was), then it was at the least massive incompetence. No Saygus V2 has ever shipped. The company continues to string pre-order customers along on Twitter with a never-ending series of vague updates promising additional updates to said updates and various other BS. Here's a timeline starting from June.

Saygus, 6 months ago, tells people to expect a "COUNTDOWN" tweet to shipping.

But we'll hint that they are close when you see "COUNTDOWN..."

Here is Saygus saying that pre-order phones are being "finished," on June 15th.

Our LOYAL Pre-Register customers get the phones currently being finished! Indiegogo buyers will be LATER. Hope you love the add on features!

Here is Saygus saying on June 17th that phones will ship "in the fall." Fall ends in four days.

Thank you @MarvelDude2000, that's just the kind of love that we appreciate. Pre-order now, shipping in the fall. http://t.co/wbklyslAEA

July 1st. Saygus says QA is half done, and tuning the final hardware "over half done."

#SaygusHeads Update: We are about half-way through quality assurance testing and more than half-way done with tuning on the final hardware.

September 21st (Saygus' Twitter account had a bit of dry spell). Saygus says to expect a shipping estimate by Friday, September 25th. The company claims it has held onto 90% of pre-orderers, which is interesting, because a Twitter search yields plenty of complaints about problems getting refunds! (Surprise: shipping estimate is never provided.)

About 90 percent of those who ordered have stayed with us and we appreciate your support! We expect to have more details on shipping by Fri

We do expect the first orders to go out any day now... but that could be a couple of weeks. The certifications are not ready yet, but soon.

Two weeks go by, and Saygus apparently decides now is the time to share photos of their logo-adorned office building in Utah.

Just expanded to two more floors and signed for another 5 years! Per your request- west side front and east side. pic.twitter.com/OZTmWBqDlf

That went over as well as you'd expect. Shortly after, Saygus starts sending out "address confirmation" emails to pre-order customers. Some received them, some didn't, no phones have shipped.

The final tweet is something about a "bonus" for pre-ordered phones and "package details." That tweet went out nearly 4 weeks ago.

All those who have been able to keep their orders with us will soon know the BONUS and package details. Lots of calculations and scheduling-

There have been no additional communications from Saygus since. Around the same time as the November 10th tweet, Saygus posted the following update to their Indiegogo page, with the same talk about certifications being done "soon."

We are grateful for your continued support! We apologize for the lack of updates. We have been busy building our amazing smartphone. No one has attempted to construct a phone of this caliber; it is a challenging undertaking. But in the end, the phone will speak for itself.

We did have some challenges due to procuring and then integrating and tuning some of the high-end components, especially the cameras. However, we have completed these phases and phones are currently being manufactured. We anticipate completing the FCC and CE certification processes soon and upon their respective approvals, we will begin shipping immediately to all supporters around the world.

We again thank you for your support!

Is it possible the phone really is just stuck in certification, ready and waiting in warehouses to ship? It is entirely possible, and I freely admit that. FCC and CE certification are not my areas of expertise, nor will they likely be any time soon. But the point is this: it doesn't matter if the Saygus phone ships tomorrow, if it ships three months from now, or if it never ships. It has an outdated operating system, outdated chipset, and it is ludicrously expensive for what it is at this point. The Saygus V2 proves exactly why crowdfunding or speculatively "pre-ordering" a smartphone from a startup is a hugely risky and generally inadvisable thing to do. Remember when Canonical (owners of Ubuntu), an actually-serious-company, decided it wanted to do a fully crowdfunded smartphone "the right way?" They asked for $32 million to realize that vision. They didn't get it. 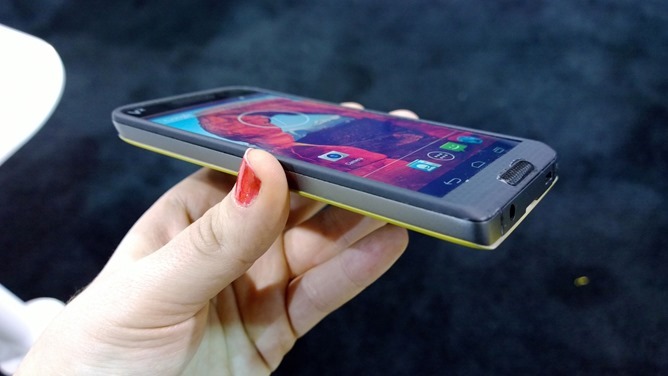 The prototype Saygus V2 from CES 2015, nearly a year ago.

Saygus, a company that's already built one vaporware phone (the Saygus VPhone debuted in the lead-up to CES in late 2009 with its own list of grand claims - it was never released), is not who you should be entrusting $550-650 of your dollars to on a "pre-order." Even if the V2 does end up shipping, let's think about for just a minute how many phones that means Saygus will actually build. With their total Indiegogo funding at $1.3 million - let's round that up to $1.5 million for simplicity's sake - at $600 a phone, that's 2,500 phones. Twenty-five hundred phones pre-ordered in a span of nearly a year. Based on 2014 sales figures, Apple sells roughly that many iPhones every five minutes.

How, exactly, is Saygus going to leverage economies of scale to support these buyers? There's no way hiring dedicated support staff for 2,500 customers makes any kind of sense for a product that is a one-time $600 purchase. How will repairs be handled? I assume customers can expect to pay out the nose, since phones will have to go back to the Chinese factory, where Saygus will likely be paying on a per-repair basis due to their tiny volumes (read: expensive). Software updates? I kind of doubt Saygus is planning on getting this thing Marshmallow any time soon, if ever. How will it develop its next smartphone? If Saygus were to build a new phone, it would almost certainly be on some Chinese ODM reference design in order to save money (I strongly suspect the V Squared is to some extent) and similarly utterly uninteresting, delayed, and poorly-supported.

If the Saygus V2 does ever ship, at least backers will have gotten something for their money, though I doubt it'll be all that great, and I'm guessing many of those who are still fruitlessly seeking refunds won't be so pleased when they get a phone instead of a chargeback on their credit cards. We contacted Saygus' last known PR firm (their last big media push was, surprise, back in June - we haven't heard from them since) and will request comment if we hear anything back.

Saygus says they will have more to share about the V Squared's challenges and delays at CES (first week of Jan. 2016), strongly suggesting the phone will not ship before then, though they declined to provide any kind of shipping estimate to us.