You'll likely see different lists according to where you live. Some apps seem to be globally recommended like Skype, Google Photos, Twitch, and djay, while others will differ based on where you're consulting the list from. In some regions, there might even be a "Made in" category, like "Made in the USA" or "Made in Arabia." 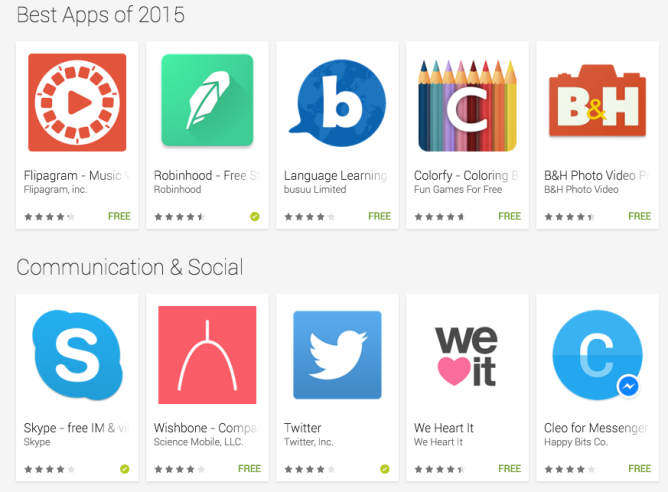 But from the looks of it, it seems that these lists where generated based on downloads, ratings, and popularity in their respective category. It doesn't look like any apps were carefully curated at all. In the US, Twitter gets recommended as one of the best communication apps of 2015 and we all know that the official client's interface, although functional, is nothing to write about. In Lebanon, I see Telegram in the list, which is a much more interesting app to highlight in my opinion. However, most of the tools and productivity choices in Lebanon are emoji keyboard apps — a far cry from productivity. Backgrounds HD somehow makes it into the personalization category both in the US and in Lebanon, but despite the huge choice of wallpapers available in it, it's nowhere near the best app among the competition. Papuh and Backdrops (among others) would certainly be more intriguing if someone did their homework diligently. Backgrounds HD is just popular because it's been on Android for years and has always stayed toward the top of the downloads list in its category.

Peruse the list in your locale and you'll see some apps with very basic Material Design implementations (not that MD is the be-all end-all of design, but there are much better apps with excellent MD that would have been worth recommending), some with rather bad design choices that don't even approach MD or anything, and some clients for very specific services. There's very little to discover and even less to enjoy.

All in all, I doubt you'd find anything really out of the ordinary in the Best of 2015 list, just popular apps getting more time in the spotlight instead of interesting and unknown choices. I remember when Google picked SeriesGuide a few years ago and everyone was astonished because it was an underground app, but SeriesGuide was awesome and it deserved it. Those times seem to be long gone.

The Turing Phone Is Being Delayed—Folks Who Don't Cancel Their Pre-Order Will Get A Free ...