As a former student of archaeology, Machu Picchu is a place that has always fascinated me. As someone direly afraid of heights, Machu Picchu is a place I will almost certainly never go, barring the invention of personal air transport. As such, today I was quite pleased to learn that Google's globetrotting street view team has mapped the ancient city-temple-palace-agrarian-center with a backpack of many, many cameras.

Machu Picchu sits nearly 8000 feet above sea level, and its real purpose still largely eludes archaeologists and ancient historians to this day. While it's clear it housed royalty and peasants alike, was used for religious purposes, commerce, and extensive agriculture, exactly why it made sense to the Inca to build what essentially amounted to a mountaintop city remains unclear. And that's long been the allure of Machu Picchu - the mystery. While Google's new street view of the site won't capture the absolute wonder that likely comes with an in-person visit, you can get a lot more up-close-and-personal with the many buildings and general layout of the site than you could with a simple photo gallery. 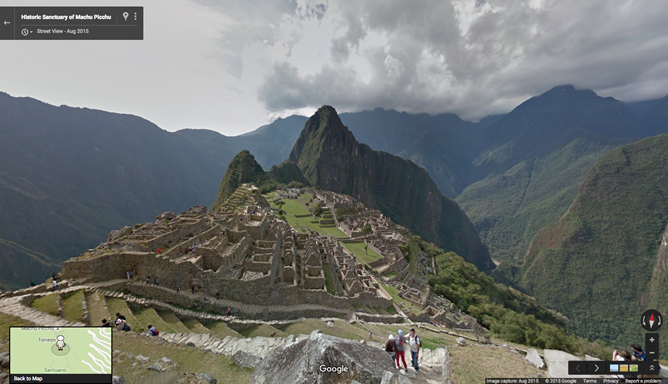 For example, you can take a close look at the mind-bogglingly tightly-fitted stones that make up the 200 or so structures at the site - many of which were laid without the use of mortar and simply pieced together like a giant rock puzzle, sans western mathematics or modern building techniques. Some of the walls are fitted so precisely, you can't even get a credit card to wedge between the individual bricks. Yes, the Inca were really good at stonemasonry.

Google's street view project also includes a walk through the Museo Macchupicchu at Casa Concha, where you can get a good look at over a hundred Inca artifacts. It's all definitely worth checking out, so just open up your Maps app and search for "Machu Picchu" to get started - it's already there.