It was just a matter of time. Emojis are an intricate part of how we communicate nowadays and every OS is trying to catch up with the latest updates and additions to Unicode. iOS 9.1 added tons of emojis, Android is about to get them soon, WhatsApp followed Apple's trail on iOS and Web, and now it's ready to start rolling these emojis to its Android client.

Version 2.12.372 (followed by a likely bug fix in 2.12.373), which is released by the company for testing on its site before global rollout on the Play Store, reorganized the emojis into new categories and added dozens upon dozens of new ones, similar to what you must have seen if you use WhatsApp Web or the iPhone app.

There are new facial expressions for hugs, upside down smiles, dollar signs, rolling eyes, nerds, and extreme sadness, among others. There is a new sign of the horns gesture that joins the previously added vulcan (Spock) salute and raised middle finger. Family emojis have been extended with the addition of plenty of LGBT choices. Among other novelties, the nature tab sees a turkey, shamrock, spider, unicorn; the food tab has a popcorn box, popped champagne bottle, taco, burrito, hot dog; and sports/activities get their separate tab and now include racing cars, medals, ice skating, volleyball, weightlifting, and a quirky levitating man in a business suit. 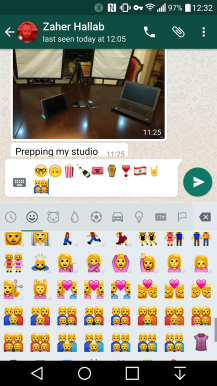 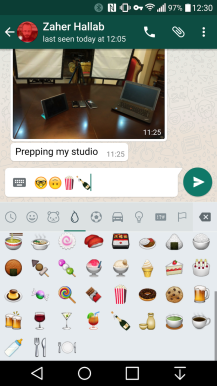 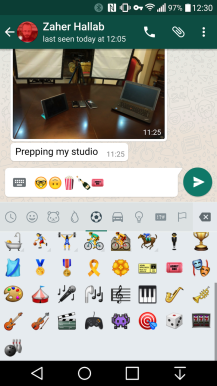 New travel destinations and places of worship have been added too. The objects now get their own tab with crossed swords, shopping bags, a joystick, a microphone, a waving white flag, and a rather grim coffin and funeral urn. Flags have been separated from symbols, and the latter see new additions like playback control buttons. Oh, and the hearts have moved to the symbols tab instead of being included with faces and people. 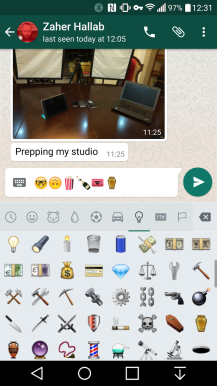 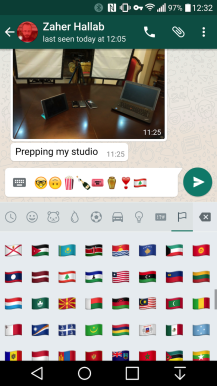 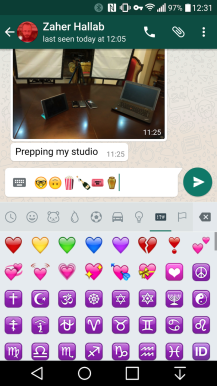 For a full list of the additions, Mashable has detailed all the new iOS 9.1 emojis which are pretty much the same that WhatsApp has implemented in this new version. You will need to be on version 2.12.372 or 373 of WhatsApp to send and receive these emojis, otherwise most of them will show up as a blank box.