Google Now can do a lot of interesting things. It surfaces relevant information when you're most likely to need it and answers your questions and requests as efficiently as it can. But one thing it couldn't do before was read text messages aloud to you. Its competitor Siri could, but Google Now was still returning search results when you asked it to show or read your SMS. That has changed, uhm, at some unknown point in the past. Some users report it working for over a month at the very least, others say they tried it last week and it didn't work. Either way, it's a great functionality and we think it's cool to highlight for those of you who haven't tried it before.

In order for this to work, you'll have to specifically say, "OK Google, show me my last messages." If you try "read me" instead, you will get a search result. Yeah, we don't get it either. But once Google processes your request, it'll display your last 5 messages and ask if you want to hear the first one. "Hear it" will trigger the nice TTS lady to start reading your first message aloud, after which she'll ask if you want her to repeat the message, go to the next one, or reply. You interact with voice actions throughout the process, choosing each action when you're prompted. It's kind of like an answering machine, but voice-activated. 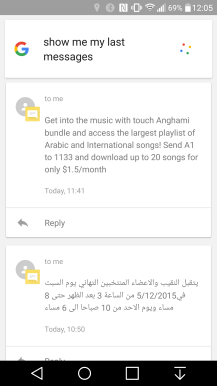 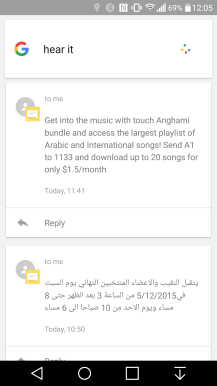 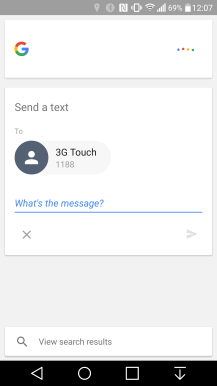 This can be very handy when you're driving or otherwise occupied and you don't want to fiddle with the screen to find the SMS app then read or reply to the last messages you received. But for now, it's limited to SMS messages and appears to work regardless of the default SMS app you use. (In my case, it was LG's Messaging app that was handling my SMS.) "Show me my last emails" displays a list of your last 5 Gmail exchanges, but you can't do anything but tap each one, and the action doesn't work at all for other messaging clients like Hangouts or WhatsApp. It also doesn't seem to work on Android Wear — at least for me. Whenever these are added, it'll be awesome because many of us have moved beyond text messages and using a third-party client to read messages isn't as seamless as having the option integrated in your phone.

Verizon Is Giving Away Exclusive Star Wars Themed Google Cardboard Viewers To Customers In Its ...