You know what I love about the Nexus 4, 5, 6, and 7? Wireless charging. In fact, that's the primary reason I haven't moved to the Nexus 6P or 5X yet — I just can't stand the idea of having it plug in every time I need to charge my phone. I realize that some people don't care about it either way, but it's been a game changer for me. I have a few wireless chargers around the house, and when I need to power up, I just toss my phone on one of them. Done. Every phone should have this.

A few weeks ago, we featured a deal on an aluminum wireless charger from a company called Choetech. I wasn't familiar with the company at the time, but the charger looked good and I like metal stuff, so I snagged a review unit. I also ended up getting the smaller, more portable fast charge model, too. Spoiler: they're neat. 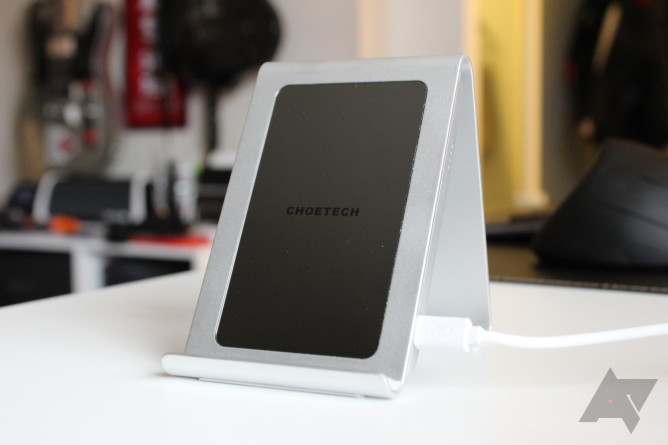 At this point, the majority of good wireless chargers are essentially the same thing — they all offer multiple coils and decent charging speeds. The Choetech chargers are no different. The biggest question I had, especially with the aluminum model, was about build quality. Just because something is aluminum doesn't automatically make it better or more robust, right? I wonder if anyone makes these in carbon fiber…

I digress. Metal doesn't always make things better, that's my point. But the Choetech aluminum charger is pretty legit, I must say. It's very well made and exceptionally attractive — as far as wireless chargers go, anyway. It's more upright than some of the other chargers I've tried, like the TYLT VU or Spigen F300. This puts my phone at a better viewing angle for notifications and whatnot, and also means that the charger takes up less space on my desk. I approve of both of these things. Also, the charging plate can be used as a mirror if need be. The one thing I don't really like about the aluminum charger is the fact that the microUSB port is on the side, so the cable sticks out like a sore thumb. I've never actually had a sore thumb, so I'm not sure how badly they really stick out, but I imagine it's quite a lot. In fact, I might even liken it to the way the microUSB cable sticks out of the side of this charger. Moving forward, I think I'll use that expression, instead: "Wow, that looks awful. It sticks out like the microUSB cable from the side of the Choetech Aluminum Wireless Charger." That sounds really good.

Otherwise, this is a damn nice looking charger. The blue charging lights are also a nice departure from the normal red/green thing we're all used to, though slightly less festive this time of year. Maybe I'll have to break out one of my other chargers with red and green charging lights just for the Christmas season. 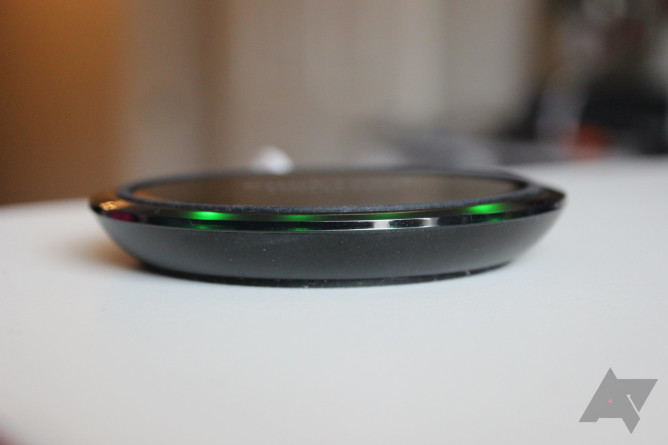 Or I could just use the Circle charger from Choetech, because it's got green lights. It's almost like they planned this.

Compared to the aluminum wireless charger, this one is a lot smaller. And a lot more circular. And a lot more differenter while still being basically the same thing. It's also faster…but only if your phone supports fast Qi charging, like the Note 5 or S6 Edge+. Mine doesn't, so I can't test that. But theoretically, it should work. It's also really well-reviewed on Amazon (both chargers are, actually), so I'm inclined to believe that fast charging does indeed work as it should. That's about as scientific as we're getting on this one, guys.

So really, the question is whether or not you should buy either (or both?) of these chargers. The answer is yes. Aside from the eyesore that is the microUSB cable sticking out of the side of the aluminum charger (I mean, really — they couldn't put the port on the back or something?), I think these may be my favorite wireless chargers? There hasn't been a single moment of mourning for the Spigen F300 that was on my desk before either of these Choetech chargers, so I'll take that as my stamp of approval. Also, the fact that neither of them have set my phones on fire is a plus.

[You Crazy Kids!] OnePlus, Those Rapscallions, Are Making An iPhone 6 Case, Because That's, ...