I like smartwatches. I also like fitness trackers. Somehow, neither one is very good at what the other can do (and no one has figured out a way to fix that yet), so generally people in my position are stuck choosing one or the other. While I've chosen the smartwatch side, I still have a soft spot for both activity trackers and traditional watches. When Runtastic announced the Moment, it really just made sense to check it out — regardless of what I wear on my wrist from day-to-day, I've always been a fan of Runtastic's stuff.

The Moment, however, just misses the mark. It's simple on the surface, and most of the real information is found within the app. To me, this kind of defeats the purpose of an activity tracker — if I can't see the info on the screen of the thing I'm wearing, why bother wearing it? 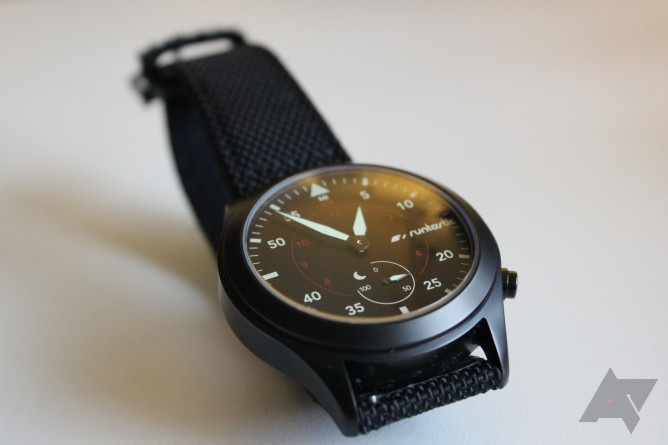 First off, I want to make it clear that I've been using the Elite version of the Moment. This is the highest-end model of the Moment family, though that just applies to aesthetics and design. All of the Moments support the same functions, and no level is any better than the other when it comes to that. It's all about the look.

And since we're talking about that, let's quickly go over the others. There are four models: Fun ($129), Basic ($129), Classic ($179), and Elite ($179). As the names imply, these are going to cater to different demographics of people — the Fun model comes in five vibrant colors and is really for those who want something simple and, well, fun; the Basic model is virtually identical to Fun, just minus the crazy colors; Classic is elegant and clean; and the Elite model is the "flashiest" of the bunch. Personally, I like the look of the Basic model the most, but I like clean and minimal things.

With that out of the way, the rest of this section will focus exclusively on the Elite model, since that's the one I have for review.

First things first, this is the most uncomfortable watch I've ever worn. Ever. The band is borderline painful depending on where you wear the watch — the ends that connect the watch are super thick, so they literally have almost no flex to them. That makes for a very stiff and rigid feel that does not conform to the wrist at all. I actually hated wearing the Moment Elite and had to take it off and leave it on the desk most of the time, because as I type (which is basically what I do all day), it would put the watch in a weird position where it rocked back and forth and just hit my wrist bone constantly. I hoped that over enough time it would "break in" and get softer, but over a few weeks that just didn't happen. Eventually I gave up on trying to wear it comfortably. I just can't imagine who thought this band was a good idea.

Past that, the watch itself is simple. It looks just like a traditional watch — there's nothing digital here — and everything is basically controlled via the app. It even sets itself over Bluetooth! I thought that was pretty neat — there's just something super cool about watching the hands spin themselves around until they hit the correct time.

There's only one button on the Moment, and it's used to enter and exit sleep mode. All simple.

The face of the watch has what you'd expect: time. There's also a smaller dial at the bottom, which is where you can see how close to your current step goal you are. This is displayed by percentage, so like most other things, you have to actually open the app and let it sync to see an exact number. It's kind of annoying.

Also, when you long-press the crown to enter sleep mode, the small dial moves to the moon icon. 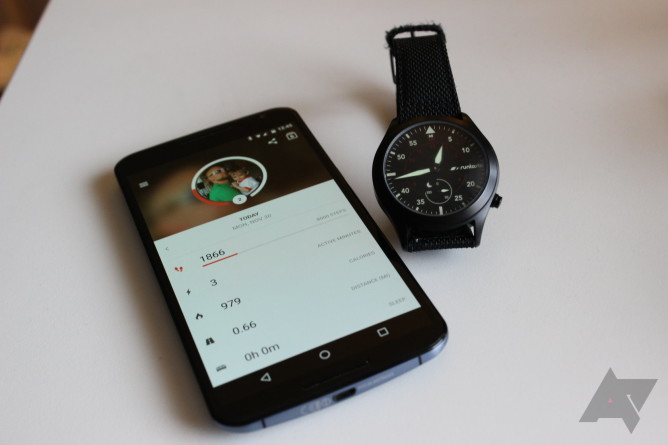 If there's one thing I think Runtastic is pretty good at, it's building apps. Just like the Orbit, the Moment uses the Runtastic Me app, which isn't an exception to that rule — it's generally a good app. I like it.

But that's kind of also the thing that drives me a bit batty about the Moment in the first place: most pertinent information has to be accessed from within the app, which is in contrast to how the Orbit works, where nearly all info is available on the device's display. I realize the Moment is probably for a different kind of person, but it still just doesn't make sense to me — everything the Moment tracks can be done directly from a smartphone, so what's the point of having a secondary device to do it when you have to look at the smartphone to see any relevant info anyway? I just don't get it.

But I digress. If you're in the market for a smart device that looks like a traditional device, this is probably one of the better ways to get that functionality. So, back to Runtastic Me. It's a simple app that I think used to be a lot more useful before Runtastic put some of the features behind a paywall. I get that it has to make money somehow, and that's fine, but I'm not going to pay $4.99 a month to check my sleeping patterns from six months ago. Sorry. Also, that reminds me: I tried tracking my sleep with the Moment, but it's so uncomfortable, I had to stop. Trying to sleep in this thing is probably like trying to sleep wearing handcuffs. On one hand. I don't know. It sucks.

But again, the app. It's pretty good. It gives all the info you'd want on the main screen after a generally way-too-long sync time: steps, active minutes, calories burned, miles walked, and sleep. Tapping each category will show you more info about that particular topic and let you see other days for comparison. This is a good way to quantify how lazy you are. Or not lazy, depending.

I also like the fact that it integrates with Google Fit, so it can pull step data from that. I cheated and used Fit for steps, that way I could leave the watch on my desk (because, you know, it's uncomfortable) and use step data from my Smartwatch 3. It's pretty neat to watch the step dial go up even though the watch is just sitting there.

One thing that's really neat about the Moment is the battery life: it uses a traditional watch battery (so it's not rechargeable, just replaceable), so it'll go for up to six months. I like this model a lot, because I already have enough shit to charge in my life. 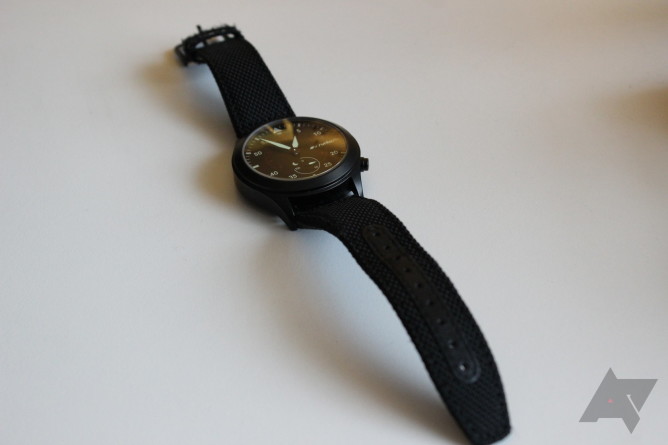 So here's the thing: I want to like the Moment. And I kind of do, but the whole thing is overshadowed by the fact that the Elite model is just so uncomfortable I couldn't wear it for very long. (Not for lack of trying, either — I tried every different tightness and arm position I could find. Including both arms.) The functionality of a device like this is also a head-scratcher to me, because again, in order to get any real info from it, you have to check your smartphone. Kind of just seems silly.

Pair that with the fact that you can easily get a full-featured smartwatch for close to the same price as the higher-end Moments, and the value drops even more, because those can do basically all the stuff that this can do…save for that awesome battery life. Man, if smartwatches got six months of battery life…that would be neat.

Anyway, yeah. The Moment is OK I guess. I mean, it does all the stuff that Runtastic says it will do, and it does it all well, so I can't fault them for that. Don't get the Elite model though, because the band sucks. If you want to spend $180 on a Moment, buy the Classic one. I guess you could put a new watch band on the Elite model, too, but then you're out more dollars. You could definitely buy a smartwatch at that point.