ASUS has been getting more invested into the smartphone market, both in the US—where we recently talked about the ZenFone 2 Laser and ZenFone 2—and in their closer-to-home markets in the Eastern Hemisphere. This review will focus on two models that will not make it to the US, but should be of interest to those in Taiwan, China, Japan, Korea, and elsewhere. The main focus will be on the ZenFone Selfie, which is much like the familiar ZenFone 2 and ZenFone 2 Laser but with a high-quality front-facing camera sensor. I will also discuss the ZE550KL model of the ZenFone 2 Laser, which is available in some non-US markets.

Just as a disclaimer to start off, both of these phones are incredibly similar to the already-reviewed US version of the ZenFone 2 Laser. Check out that review for some more information and opinion since I will be focusing on the contrasts more than anything else here, though this should be useful as a standalone review regardless.

The ZenFone Selfie boasts a nice 5.5” 1080p LCD display with a quad-core Qualcomm Snapdragon 615 under the hood. Like all ZenFone 2 Laser models, the Selfie has a 13MP back camera with laser-aided auto-focus. The biggest difference with the Selfie, though, is another 13MP camera on the front for…well, you know.

Here are the full specs for the Selfie:

For a quick run-through of where we’re going, here’s the good and bad in a nutshell.

Last, but not least, here is a rundown of specs for the ZE550KL model of the ZenFone 2 Laser. I have bolded areas where it differs from the previously-reviewed ZE551KL.

I don’t want to repeat myself too much here when comparing to the already-published ZenFone 2 Laser review, but here’s the scoop: it’s pretty plain in terms of its appearance and its feel. Unlike the previous review, though, the Selfie and the international variant of the ZenFone 2 Laser can be purchased in very much eye-catching pastel colors. 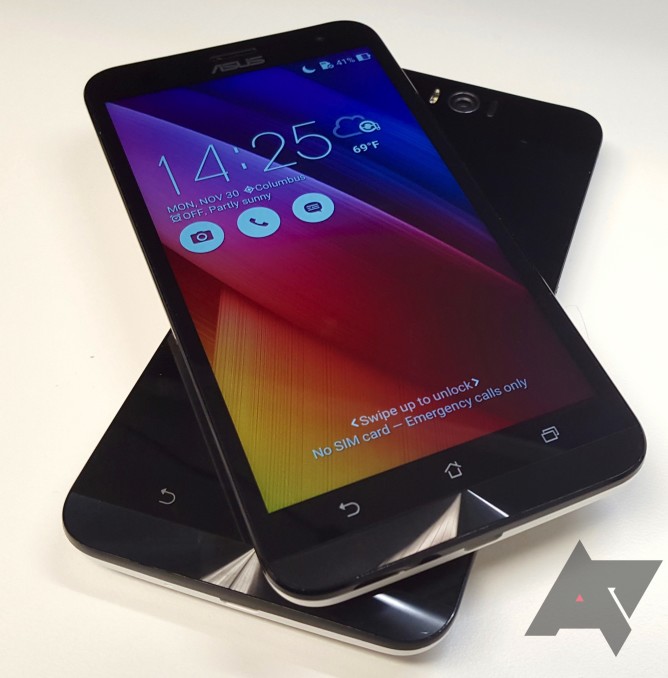 You are still looking at a removable battery, which is nice. The back cover is plastic, but feels quite sturdy and doesn’t attract fingerprints. The power button placement at the very top means you won’t use it often, but this is redeemed in part by the double-tap-to-wake feature on the display.

One nice change with the Selfie compared to the ZenFone 2/Laser is that the big ASUS logo above the screen is dropped to make room for the large camera sensor. 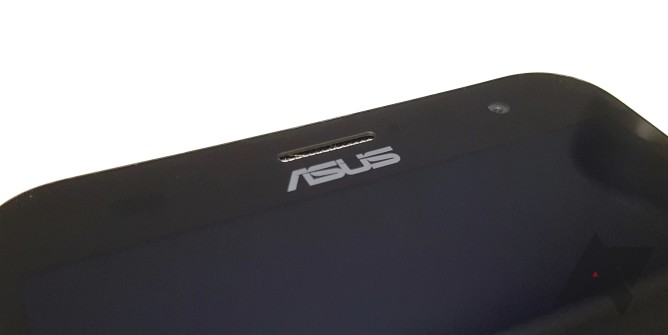 The biggest drawback in my opinion is the phone’s overall size. At 10.8mm thick, it is very much chunky by current standards. The overall dimensions of the phone make it generally kind of unwieldy, but not so much that I—with bigger than average hands—had any real trouble using it. I would say it is more of an aesthetic concern than anything else, but it is something to keep in mind.

The ZenFone Selfie’s screen appears to be the same as the ZenFone 2 Laser US edition. This means it is 5.5”, 1080p, and LCD. It is a fine screen and if you haven’t had one with this kind of resolution before, it’s going to look really good. For phones in this price range, it is nearly top notch. A more careful eye will notice that colors can be a bit washed out, especially if you compare it to something like a Samsung display. My biggest issue with it is the maximum brightness, which makes it difficult to use in sunlight.

Unlike the US variant, this international ZenFone 2 Laser has a 720p display. With that said, it never struck me as a major downgrade, no matter how technically true that is. Of course, I am not one to put high priority on screen resolution, so you can take that for what it’s worth. I have not noticed any battery benefits, even though they could be there.

In general, I enjoyed both of these phones. I am able to ignore some of the drawbacks of ZenUI and appreciate some of the benefits. The international ZenFone 2 Laser can get a little slowed down sometimes, but in general both phones are fairly speedy and inoffensive. I am not a big selfie taker—in fact, I think I am ideologically opposed to them—but both devices have very easy to use and generally satisfying back cameras. ASUS has several tricks up its sleeve in both the hardware and software and I enjoyed encountering them.

With 3000 mAh, removable batteries, both of these phones performed very well when it came to battery life. With moderate use, I frequently could get near 48 total hours of running life without needing a charge. I was caught off guard a time or two when it was closer to 24 hours, but in either case it was a real strength.

One of the main updates from the ZenFone 2 to the ZenFone 2 Laser is the camera. The laser focus feature is also included in the back camera of the ZenFone Selfie, so the camera experience across all three should be assumed to be the same in terms of the back half; this was my experience with the trio of them. Laser focus is fast, accurate, and perhaps most helpful when taking macro shots. Even when it misfires, it makes things focus quickly enough to recover and re-focus without missing out on your photo opportunity.

The first image below is an HDR capture that exposes perfectly in the twilight. The second is an example of the laser focus allowing for an attractive depth of field, with the tiny green leaves in focus.

The namesake of the Selfie, though, is a bit more mixed for me. While the wide-angle, 13MP front shooter is technically proficient, it is nothing like the back camera in terms of performance. Proper light exposures were more difficult to come by and there was a fish-eye effect in the portrait orientation. Focus, sans laser, was very slow and frustrating. I would not buy the Selfie just for this front camera, only because it is basically the US ZenFone 2 Laser but with a better front camera. (Props to Coffee the cat, who spares us all from a bunch of Jacob selfies.) ASUS’s very proprietary ZenUI runs on top of Android 5.0.2, which is fairly out of date at this point but is perfectly adequate given everything else. The UI customization is deep and pervasive, so it is an unmistakably ASUS spin on Android, though I think it is up for debate whether it is really all that bad. I appreciate manufacturers trying to add value and like to approach these things with an open mind.

Still, these phones are stuffed to the gills with unneeded apps and features. Think of Samsung a few years ago in terms of the “more is more” approach, though in my opinion ASUS is a bit better when it comes to UI design. ASUS apps update via the Play Store, which is smart if not all that unique at this point. Third party apps can be removed, though, which makes the extra software a bit more of a minor inconvenience than anything else.

The ZenFone Selfie, like the US ZenFone 2 Laser, is a very smooth operator. My priority when using a phone is that everyday things like looking through apps in the launcher, switching between apps, opening up the camera, and things like that are all relatively stutter-free and predictable. That is definitely the case for the Selfie. Even when updating apps in the background, it hardly flinches, which is really saying something in my experience.

The international ZenFone 2 Laser variant is a smidge slower, possibly owing to its 2GB of RAM. Still, it quite honestly had fewer UI hiccups during my trial than my Galaxy S6 does on a regular basis, which goes to show you that the software is really important when it comes to practical performance.

Those of you looking for something not too far from flagship experience at a very far from flagship price will want to look into the ZenFone Selfie and ZenFone 2 Laser. Do be careful, though, to check model numbers and cross-check the specs with ASUS’s website. In my US ZenFone 2 Laser review, there was a great deal of confusion among commenters about which phone I was reviewing and why my stated specs didn’t match up with what they saw at local retailers.

I don’t know exactly why ASUS insists upon naming devices that differ in sometimes significant ways the same thing, but that’s what they’ve done. And considering how good these phones are, I’m willing to forgive them.

As to whether you should buy, that comes down to your preferences. If you really like speedy updates and a stock Android experience, you probably just won’t enjoy ASUS’s very proprietary ZenUI. If you are more adventurous and not so worried about the bleeding edge, you might enjoy ASUS’s take on Android.

The laser focus back camera and the Selfie’s front camera are both more than serviceable and will blow away the performance of recent flagships like the HTC One M7 and M8, not that they are exactly the standard. Getting a proper focus and exposure was generally unproblematic for me on the back sensor, which is a very important aspect of camera software in practice. Now if you find yourself in a position where you're choosing between the US ZenFone 2 Laser and the ZenFone Selfie—which is not designed to fit any US carrier's bands and won't be sold by US retailers—my opinion is that the front camera alone does not make the Selfie better. When choosing between the international ZenFone 2 Laser and the Selfie, the spec differences in the Selfie make the step up worthwhile.

Overall, you’d be remiss to go hunting for a low-to-mid-range smartphone right now and fail to seriously consider the ZenFone Selfie and its slightly inferior cousin, the international ZenFone 2 Laser.

Note: The units in this review were provided by Expansys USA. Learn more or buy the ASUS ZenFone Selfie here and the international ZenFone Laser 2 here.