If you're an LG G4 owner on Verizon, you may have heard about all the drama surrounding the phone's "touchscreen fix update" that has since rolled out on every other US carrier. Back on October 9, Big Red began rolling out this OTA as firmware VS98612A, but it was pulled two days later due to a major bug affecting the device's ability to receive push notifications while connected to Wi-Fi. A month-and-a-half later, Verizon and LG seem to have gotten their stuff together, and have now released a new OTA which shouldn't have the same problems that the original 12A update had. In addition to the long-awaited touchscreen fixes, people are also reporting that this update includes a new slow motion option in the camera app, and unlinks the ringer, notification, and system volumes a-la the LG G3. 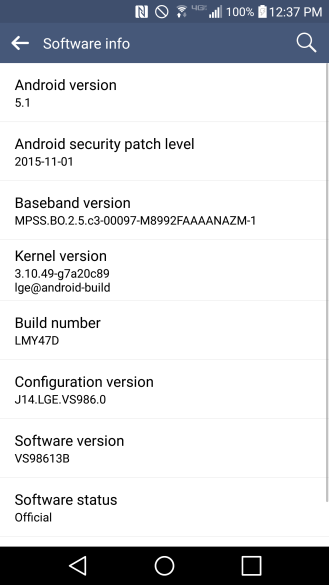 The new firmware is still Android 5.1 and continues to be based on build LMY47D. The OTA weighs in at 422 MB if your phone has the VS98611A firmware, or 61 MB if you got the VS98612A update before it was pulled. It doesn't appear that this is a staged rollout, so this update should be available to everyone right now assuming the phone has an active SIM card in it.