In preparation for the release of Episode VII in just a few weeks' time, Google has partnered with Lucasfilm and Disney to bring the Star Wars experience into just about every Google app and service around. Fans can pick between the light side and the dark side on google.com/starwars and apps like Maps, Search, and Gmail will begin to transform to reflect their chosen path.

But Google claims that this is just the beginning. Clay Bavor, the VP of Product Management at Google, says he hopes to continue adding to the experience by recreating the Millennium Falcon in virtual reality through Cardboard or even having Google Translate decipher Wookiee Speak and other languages from the Star Wars universe — here's to hoping for some sort of Ingress integration. The die-hard fans at Google have also hidden several easter eggs for users to find, and it wouldn't be the first time Google offered real prizes for sharp-eyed hunters. 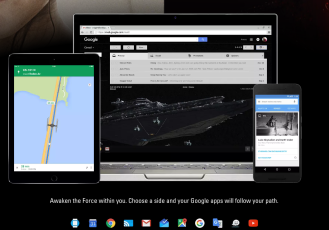 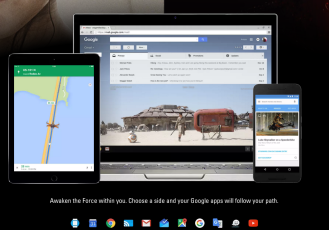 The experience will work across Android, iOS, and the web, so head on over to the Star Wars landing page and choose your side to begin the adventure.

Live long and prosper, everyone!

[Deal Alert] SanDisk's Dual USB 3.0 And MicroUSB OTG Flash Drives Are At Their Lowest Prices On ...