Good grief, T-Mobile has been awfully late in providing the Android 6.0 update to Nexus 6 users on its network. That kind of behavior is positively... carrier-like. But as of Friday the rollout for Marshmallow should have finally begun, at least if you're anywhere near a Wi-Fi network - according to T-Mobile's support document, a full OTA including the cellular network will begin later. As always, it might be several days until you see the update alert on your specific device. 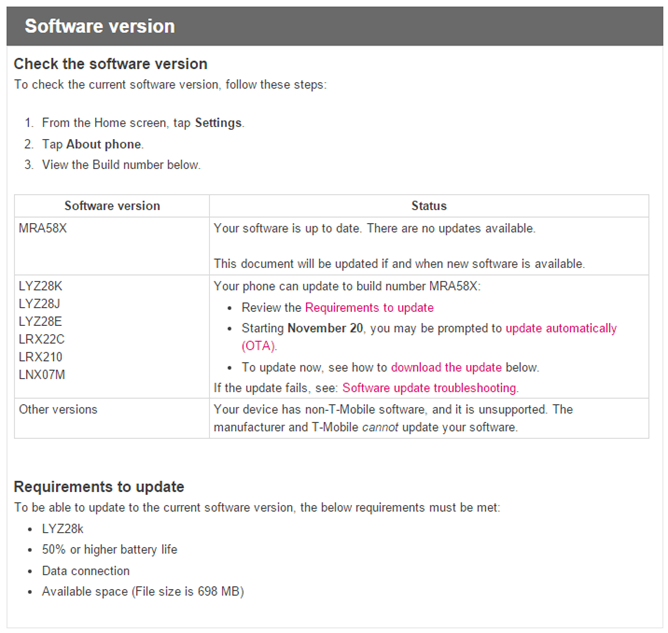 The build mentioned on the support page is MRA58X, which currently isn't available on Google's Nexus image download site. That's probably because T-Mobile uses a couple of software features that aren't necessary on other carriers, particularly support for LTE band 12 and T-Mo's specific implementation of Wi-Fi calling (which hit Lollipop back in May). Google is currently hosting older Lollipop builds for T-Mobile, so the download page will probably be updated at some point for those who want to manually flash Marshmallow.

T-Mobile's support page doesn't mention any changes aside from the Android 6.0 upgrade, but that's not unexpected since the Nexus 6 runs on (nearly) AOSP software builds. The OTA upgrade file size is just under 700MB, and you'll need a 50% charge and a Wi-Fi connection to download it.

Many Nexus 6P Owners Are Reporting Microphone Problems, May Be Related To Noise Cancellation; ...