A very long-awaited update to Google Fit began rolling out earlier this week, but it seemed to focus almost entirely on improvements to the Wear micro-app while the main app was all but ignored. As it turns out, that was a mistake. A fresh update to the app started rolling out yesterday and it brings the rest of the features that were intended for this release – and what a list of features they are.

Note: Everything here was about to be part of a teardown, but the update stole that thunder. (And I'm not bitter about that at all <grumble> <grumble>) There are still a few things that don't seem to be live yet, so there's still a teardown at the bottom. 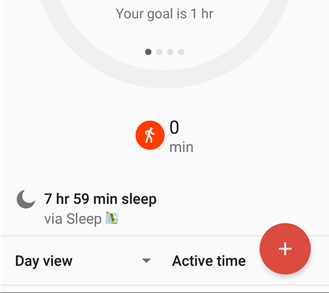 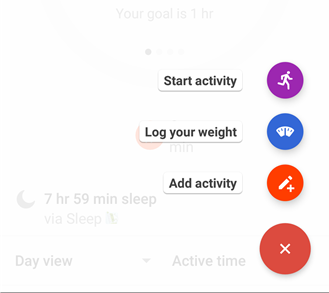 The options for adding activities and logging weight mysteriously disappeared from the overflow menu in the previous release, but they've returned in a brand new floating action button (FAB). They work the same way as before, but joining them is a new button to start an activity. One great thing about having a FAB is that it stays with us as we scroll, unlike the overflow menu that's only available when we're at the very top of the page. 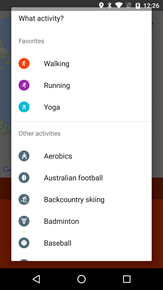 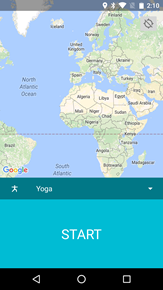 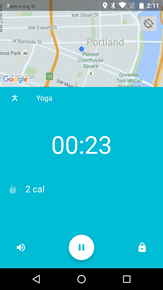 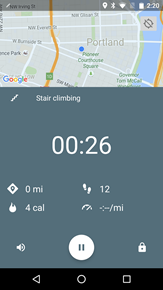 One of the big new features is an activity counter. Just start it up from the FAB, pick your activity, and hit start. Your choice of activities can determine what Fit does during your workout. If you're doing yoga, it will just count up the minutes and seconds with a running estimate of calories burned. If you're doing something more conducive to carrying a phone, like running or stair climbing, the accelerometer and possibly GPS will kick in to track steps, distance, pace, and possibly more. This resembles the rep counting feature just added to the Wear companion app. 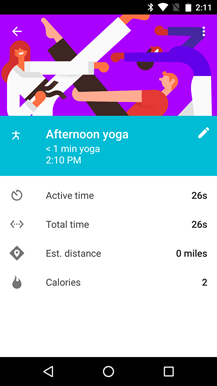 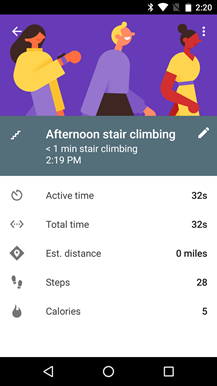 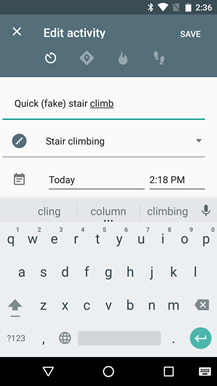 When you're finished with an activity, pause the workout and hit the stop button to see a summary of your exercise. You'll have an opportunity to hit the edit button to adjust details of your workout in case something wasn't quite right. Each activity is also given a name based on time of day and nature of the workout. This title can be changed to something more meaningful, and it will show up in your main list with the new name. 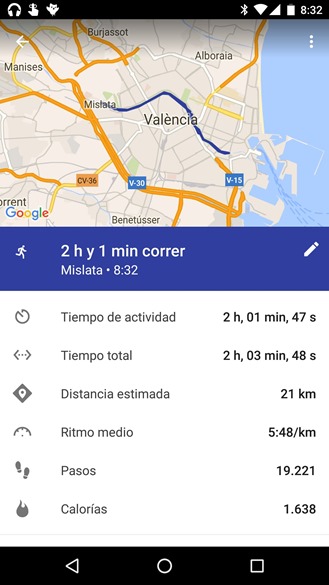 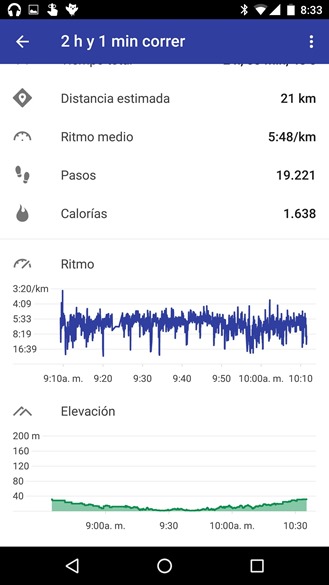 Google Fit is also making some great use of the Google Maps SDK with a brand new run mapper. Start an activity, set it to running, and take off on your favorite trail. Fit will turn on the GPS and record your path as you run. When you're finished, the summary will show your route, distance traveled, speed, pace, and calories. It also includes charts with your elevation at different points during the run and your speed throughout the run.

Based on the teardown, I also know that there may be a chart for heart rate during your run, but I expect this only shows up if a Fit-compatible heart rate monitor is connected. It's also possible this feature isn't live yet, since it isn't mentioned in Google's announcement of the new features. 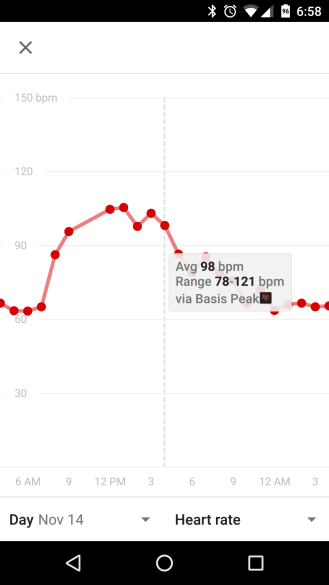 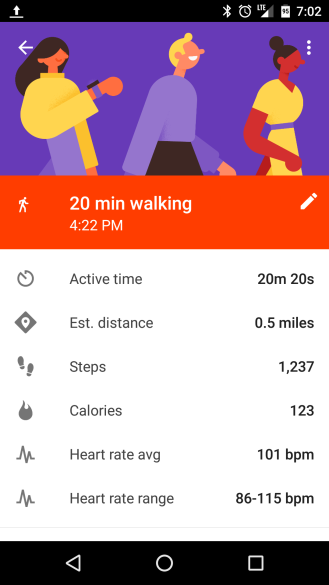 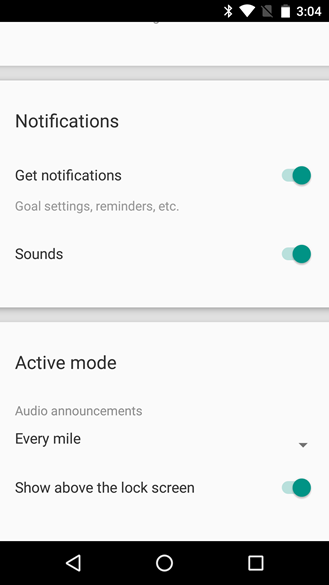 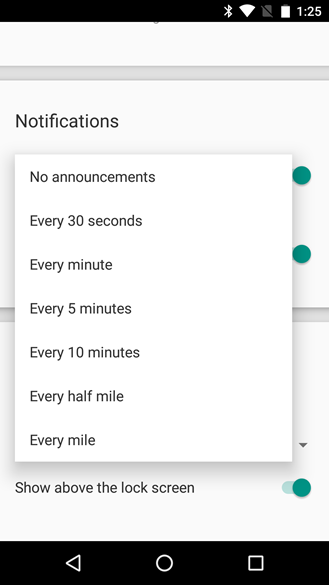 There's a new feature Fit calls Active Mode that serves a pair of purposes. To begin with, while you've got an activity going, Active Mode will keep the activity screen on top if your lock screen activates. This is obviously handy in most cases, since most of us will let our screens turn off during workouts, and we don't really want to unlock our phone to see our progress or pause the workout. This is enabled by default, but it can be turned off in Settings.

The second part of Active Mode is an audible announcement during your workout to let you know how long or how far you've gone. At configurable increments, the text-to-speech engine will fire up to shout out your progress while you run or work out. Again, these can be set up at the bottom of the Settings screen. Just remember to turn off the audible alerts before yoga classes.

Nutrition And Sleep Join The Stream 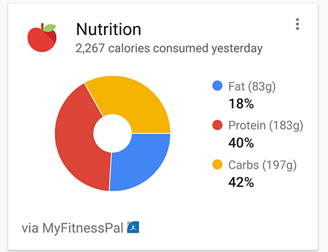 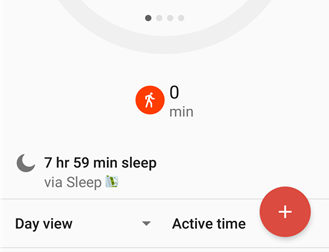 If you've been using another app to track your eating habits or sleep, that information will finally show up in your activity stream. The new nutrition card includes daily calorie counts and a breakdown of details like fat, protein, and carbohydrates.

Sleep data was expected after it first appeared in the final Android M Developer Preview, but it wasn't present in the release earlier this week. It now shows up as an activity in your daily stream along with exercises.

With the combination of exercise, daily activity, eating habits and sleep, you can now get a pretty good image of how well you're treating your body.

Do you challenge yourself by challenging others? Maybe you just want to work out with a group of people because it's more fun. Whatever the reason, you might want to get some people together for an event, and Fit is going to help with that. There are hints of a new group invite feature.

From these couple of strings, it's obvious that these group events include some degree of participation. There aren't any strings for setting up the event or sending out invites, but the two above show how a description template for events and text for declining an invite. Since the template text includes the words "Google Fit," it's unlikely that it will show up in the app, but perhaps in a notification, as a calendar entry, or elsewhere. Since there are big pieces missing from this, it's obviously not live yet. (Unless there's another quickfix... I'm still not bitter.)

Do you not use Google Fit? (Why are you reading this article?) You probably don't want Fit to chew through battery life if you're not using it for anything. The developers understand this and want to help preserve your phone's juice. There's an anti-feature in the works that will do just that. Google Fit will gain an option to "disengage" and cease tracking. But this isn't just an option, it will happen automatically after a month without launching Fit. Once tracking is disabled, it's simply a matter of popping into the app and tapping a button to restore functionality.

This should be a big help to all of the people who aren't too pleased with seeing Fit hovering somewhere in their battery stats screen when they don't use it. The text isn't clear, but I get the sense the syncing feature will probably continue to work, but things like step counting will go away. This would mean we can continue to use 3rd-party apps that integrate with Fit to sync data across devices and the web.