Google has already talked about new features in the upcoming Android Wear 1.4 update, but so far the only place you can experience them is on the new LG Watch Urbane 2nd Edition LTE. Updates for other watches are pending, but in the meantime developers can get ready for the new version with the API 23 SDK, which Google is currently in the process of rolling out.

Google says the SDK and emulator images for Marshmallow on Wear are live, but so far we've only seen the updated emulator. The SDK might show up at any moment, though. Whenever it does appear, developers will be able to get apps ready for the new build of Android Wear with Marshmallow-style permissions. Just like on phones, you'll be able to grant and deny permissions to watch apps. That will require a little legwork for devs.

Google has also added optional -round and -notround resource qualifiers, which will help devs load the right images and layouts on a watch based on its shape. These combine with existing resource qualifiers (eg. -hdpi and -280dpi) to provide more flexibility in how an app looks on watches. 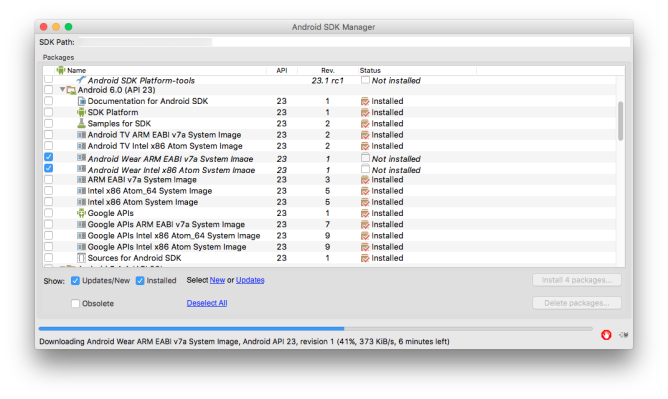 Devs can also begin working with audio in API 23, just what you need for watches with a speaker. The only watch to officially have a speaker is the new LG Watch Urbane, but we're pretty sure at least the Huawei Watch has one too. Watches with x86 chips will be supported in the new API as well, but there aren't any of those right now. The TAG Heuer Connected will be the first.

All current watches run API 22 (Lollipop), but they will be updated to Marshmallow. No one is being left behind this time, so devs will want to get apps ready for the change. Google hasn't discussed a timeline for the update yet, though.