Google consists of at least one, maybe two, trillion departments, and they each adopt new visual styles at their own pace. Even then, interfaces can vary from one device to another. Google+ looks one way in the Android app and another way entirely when you sign on from a PC. Now this particular Google department is pushing out a more unified look across devices, starting with the web.

The new Google+ sticks a bold red action bar across the top akin to what you get using Inbox and other Material-y things. But the bigger change here is increased focus on Collections and Communities. Google says these are the parts of the social network that people use most, so it's putting them front and center.

Communities are the discussion groups that have largely taken the place of Google Groups. Even if you don't actively use Google+, you may have joined a community to get access to a beta. Collections arrived this May as a way to organize and keep up with your favorite interests. Both have worked their way up the hamburger menu (which has returned to replace the current drop-down menu) to be the first things under Home. Google has also redesigned the home screen to surface more compelling posts and enable you to post content more quickly.

You can try out the new Google+ now by going to Settings > Manage other apps & activity > Manage Google+ activity and clicking in the search bar at the top of the screen. Yes, it does kind of feel like activating a cheat code, but note that at the moment, the UI reverts back if you refresh the page. 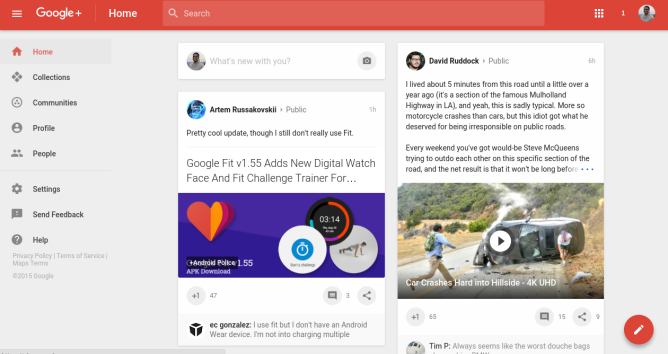 Clarification: T-Mobile Says The Nexus 6P Is Not Band 12 Certified Yet, They're Still Working On It