Back in August, we talked about a new OneNote feature called "Floatie," which was a terrible name. The feature was interesting, though, so it's all good news now that Microsoft says the floating button is here to stay and that they are calling it "Badge," which is much less terrible.

The gist of it is that saving information from other apps into OneNote can be a real pain sometimes, so if you know you'll be taking notes for yourself or cutting and pasting things then you can just keep the Badge around all the time. Without entering the OneNote app, you can write notes and take screengrabs and organize them into the appropriate notebooks. 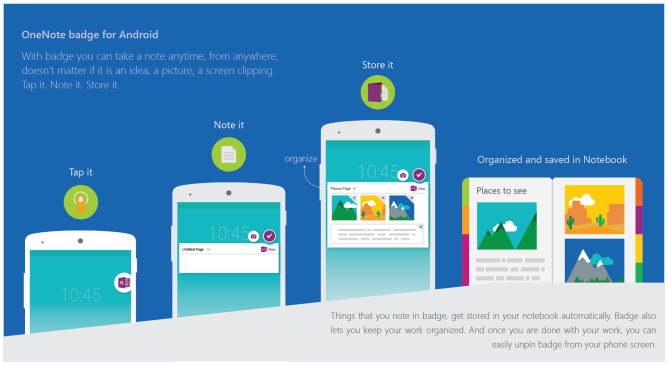 It's a little bit of a niche feature, since many people don't use OneNote quite enough to want it ever-present on their Android device's screen. Power users, though, will really appreciate it.

If you only want to use it for a little while, you can just go to the app and hit "start Badge" in the overflow menu.

While it hasn't changed substantively since I talked about it during its beta run that began in August, you can get the most recent version that calls it "Badge" at APK Mirror right now. Microsoft says all users will get an update in the coming weeks via the Play Store.

Google Sheets Gets A Commenting Feature, More Improvements To Android Chart Management, And 400 ...