Hey, did you notice yesterday at any point that T-Mobile said it's raising its prices? Well, that's because they never actually said it. They even got us - with all the talk of unlimited video streaming and double data, seemingly almost nobody noticed that the Uncarrier has raised prices on most of its Simple Choice data plans, and substantially if you want unlimited. While current customers won't see a rate increase per T-Mobile's promise of never raising your bill, new individual customers will be paying a fair bit more for data. Here's the breakdown.

Fortunately, prices for T-Mobile's multi-line family plans will not be raised if you choose a "family match" option (even unlimited) - that is, everyone on your family plan (2 or more lines) must have the same amount of data. If you don't have the same amount of data on each line, you'll be hit with individual subscriber pricing for data on each line.

T-Mobile put up the following image during the Uncarrier presentation yesterday, but there's nothing on the slide about these prices being new or increased - kind of sneaky. But they did put it up, so the information was available. Happily, as T-Mobile probably fully intended, almost everyone covering the event ignored it. The new prices take effect on November 15th and, again, will only affect new customers or [presumably] those who change their data plan. 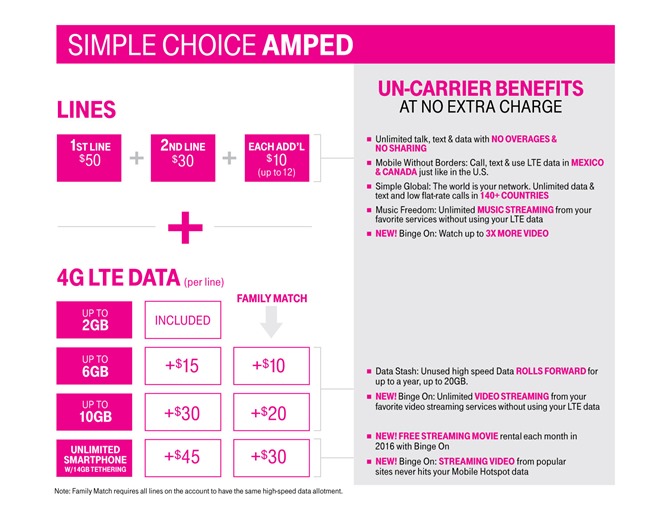 So, yep, there was a bit of less than fantastic news at yesterday's T-Mobile Uncarrier event; granted, they're still pretty easily the best value in the wireless business in America.

T-Mobile is now putting a 20GB cap on Data Stash - and it's opt-out. The only way you'll be able to take advantage of Binge On is to participate in the new 20GB capped stash, meaning you won't be able to hoard dozens of gigs for HD streaming over the year, just 20GB. It's on the Binge On FAQ. You have until December 16th, 2015 to opt out of the new, capped stash.

If you opt out of the new data stash limit, you don't get Binge On unlimited optimized streaming. Nice, T-Mobile.

We are still trying to get confirmation officially from T-Mobile, having reached out on several channels, but it looks like doubled data will not be given to current Simple Choice customers free of charge. You'll be required to "switch" to a new Simple Choice Amped plan if you want the doubled data, which entail the above rate increases. No one will be forced to switch. All current Simple Choice customers with 3GB or more data on their plan will still get Binge On.