TAG Heuer has now officially announced the most expensive smartwatch running Android Wear, which means (by the infallible logic of luxury watch enthusiasts) that it's also the best. To be fair, in terms of materials and technical hardware, the TAG Heuer Connected probably is the best Wear device at the moment: it uses a new-to-Wear 1.6GHz Intel Atom processor and 1GB of RAM, along with 4GB of storage and a 410mAh battery. That means it should be faster than most current Wear devices, and with double the memory, it might have significantly better performance. It had better: TAG's suggested price and the going rate on the online store is a whopping $1500.

That price gets you TAG's distinctive styling, scratch-resistant synthetic sapphire glass, a titanium body and watch lugs, and... a silicone watch strap. It fits in with the "sporty" aesthetic, I suppose, but it can't help but seem a little cheap at that price. Black will be the only available strap color when online sales begin later today - retail partners will get white, green, yellow, red, blue, and orange editions. The round screen uses a transflective LCD panel (the same kind as the underwhelming Sony SmartWatch 3) and a resolution of 360x360. The software is Android Wear plus a ton of customized TAG Heuer add-ons, including official interactive watch faces, and custom alarm and timer apps. Don't worry, it should be compatible with all standard Android Wear apps. 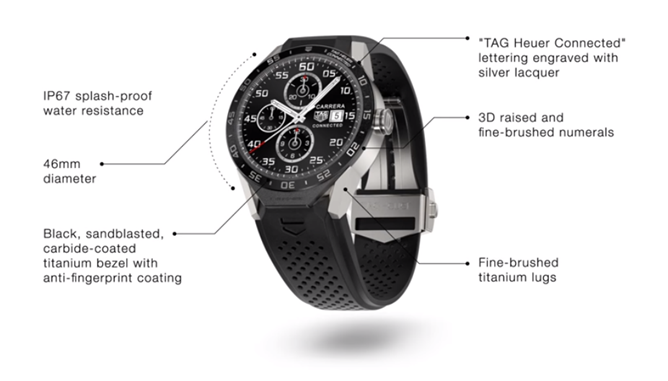 There's one notable omission from the Connected's spec list (or at least it would be an omission, if there was a list): a heart rate monitor. The bottom of the case has POGO pins for charging and nothing else. But at least you can feel superior to all those peasants who bought a G-Watch... and still get looked down upon by people wearing a gold Apple Watch.