About a year and a half ago, I called the original Fugoo "the speaker I'd make if I made speakers." The design of it is actually brilliant — it's waterproof, offers 360 degree sound, is crazy-robust, and gets an insane 40 hours of battery life. Really, it's a beast.

Then, back at CES (yes, in January), Fugoo announced the XL. Like the name suggests, it's a big-ass version of the original Fugoo speaker. I've been waiting for what seems like forever to spend some time with it — as good as the original was, a bigger version is logically better, right? I mean, it makes sense to me.

But now the landscape is entirely different. The UE MEGABOOM exists. The JBL Xtreme not only exists, but also crushes everything else at the $300 price point, which is exactly where the FXL comes in. 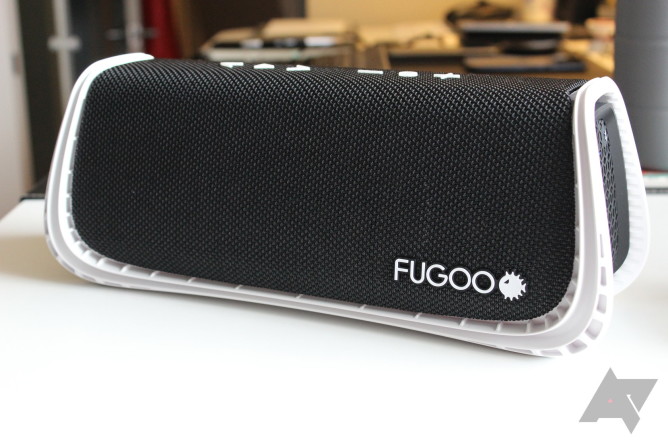 The FXL literally looks just like the original Fugoo, only bigger. It's got the same overall design, has a variety of jackets to make it more or less robust, is completely water/snow/mud/shock-proof, and features speakers all the way around it for 360 degrees of sound. Of course, since it's larger, it has eight speakers instead of six, and also offers more controls along the top. Where the original only offers dedicated play/pause and volume controls (though the "action button" can control tracks when paired with the corresponding volume control), the XL has separate track and volume controls, play/pause, and a way to activate Google Now (or Siri for iOS users) directly from the speaker, which is actually pretty cool. Kind of janky, but still cool. Oh, the buttons also glow in the dark. It doesn't matter how old I get, I always love things that glow in the dark.

It's built like a tank. It's stout, sturdy, and just made to take a beating.

Fugoo did change some things on this model, however. Instead of leaving all the ports and whatnot uncovered, most of them now live beneath a small, water-tight door, the only exception being the auxiliary-in. Since the XL is so big (and has a battery to match), you can also use this one as an external battery; not an usual feature for a BT speaker, but a nice one to have nonetheless (and one missing from the original). Because the speaker is designed to be robust, it's no surprise that it's built like a tank. It's stout, sturdy, and just made to take a beating. And for those who want to take that up a notch, the Tough Jacket makes it even more robust (again, like the original). But personally, I think the Sport Jacket is tough enough for most uses. Unless you plan on taking it spelunking, skydiving, or bungee jumping, you probably won't need the Tough Jacket. There's also a jacket made just for looks — the appropriately-named Style Jacket — so that's a good one for those who don't really plan on taking the speaker many places. Again, I feel like the Sport is the best all-around jacket. Aside from robustness, none of the jackets affect or change the speaker's overall functionality, so really you just have to choose which one suits your intended use the best. 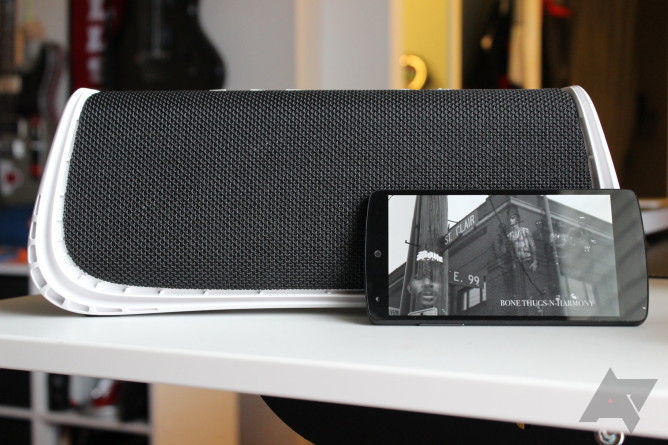 So this is the big one, right? The original Fugoo speaker sounded good, albeit a bit quieter than most people would like, but a bigger speaker needs to be louder, fuller, and just generally more awesome. Compared to the small one, the larger one is unsurprisingly all of those things.

By itself, the XL sounds great. Audio quality is full and sharp; bass is very present without being overbearing, treble and mids are pristine — it's just a very well-rounded speaker. It also has a dynamically adjusting EQ that will tweak the curve as the volume is adjusted so you never get that speaker-destroying bass rumble. All in all, it's a well-designed speaker from a listening perspective.

But then I compared it to the JBL Xtreme, which is really the FXL's main competition in my mind. In a side-by-side comparison, there's really no contest: the XL sounds excellent by itself, but when pitted against the Xtreme, it just can't do it. The Xtreme is literally the best-sounding BT speaker I've ever heard, and the Fugoo XL does not change that. In comparison, the XL sounds weak on the low end and like it's wrapped in a blanket on the high end. It was actually shocking how different it sounded compared to the Xtreme.

That said, it definitely has some advantages over JBL's speaker. It's more robust: it's waterproof and shockproof. It has interchangeable jackets to suit what you need. It's fully and completely submersible in water. None of these are things that the Xtreme can do — it's splashproof at best, and the exposed drivers on both ends make it more fragile than I'd like.

The XL sounds excellent by itself, but when pitted against the Xtreme, it just can't do it.

When it comes to battery life, the FXL is an absolute beast. Fugoo claims the XL will get up to 35 hours of battery life with the speaker at half volume; in my tests, I got about 30 hours of wirelessly streamed tunes at around half volume (give or take), which is nothing to shake a stick at. (I mean, if you shake sticks at speakers you're pretty weird in the first place, to be honest.) 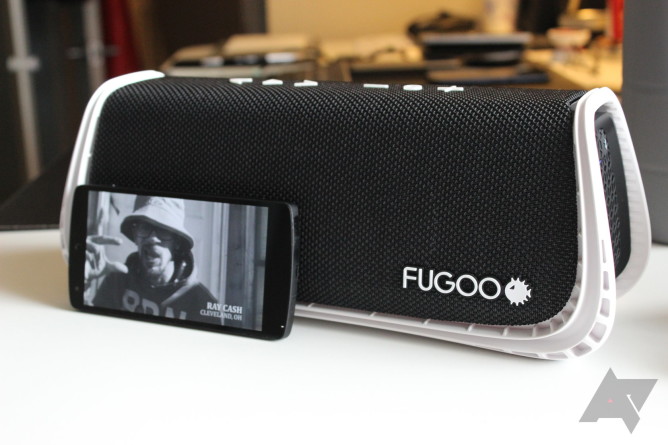 The Fugoo XL is probably the best-sounding super-robust speaker that you can buy right now. If you need something that you don't have to baby in the slightest — something you can brutalize, even — this is the way to go. It sounds better than the UE MEGABOOM, and is more durable than the JBL Xtreme. It's kind of the perfect medium between sound and durability, really. And it's got incredible battery life.

The Fugoo XL is probably the best-sounding super-robust speaker that you can buy right now.

But if you want the best sound quality you can get in a speaker that's still pretty tough, the JBL Xtreme is undoubtedly the way to go. Don't get me wrong, the Fugoo XL sounds really damn good, and it's tougher than anything else you'll find on the market today. Honestly, if you don't have anything else to compare it to (read: if you don't buy both the XL and the Xtreme), then you'll most likely be very happy with the XL's performance and sound quality. I know I would be. Hell, I'm still using the speaker right now, and I finished the text of this review like four days ago (I had to test battery life!).

For those curious, I always use the same playlist when testing speakers. If you're interested in checking it out, you can find it on Google Play music. I generally also have one or two albums I can't stop listening to with each new speaker. For the Fugoo XL, I couldn't stop listening to Dog Fashion Disco's two newest albums: Ad Nauseum and Sweet Nothings. Also, MGK's Till I Die Part II has been a constant in my rotation lately.

[Deal Alert] The First Season Of Six Different Children's Shows Including 'Bo On The Go' And ...

HTC Uploads The One A9's Camera App To Google Play