In addition, HTC has now delayed Verizon network compatibility for the One A9 indefinitely. They had promised compatibility shortly after the November launch, then in December, and now have no ETA for the feature.

Thank you for ordering the HTC One A9. It's the phone that gets all the important elements right-including UH OH Protection, and 6 months Google Play Music. When you buy the HTC One A9 from HTC.com, you get more value and greater level of freedom with a special SIM unlocked edition that comes with unique benefits. Your order of the Carbon Grey HTC One A9 will begin shipping on 11/10/2015 based on shipping method.

It's taking a little longer than expected to get you your Carbon Grey HTC One A9. To make up for it, HTC would like to give you 25% off of accessories to protect and personalize your new phone.

FOR VERIZON CUSTOMERS:
The HTC One A9 is the first CDMA-less device to support both voice and data services over LTE, providing individuals with the flexibility to use the same device on multiple carrier networks. To ensure the best experience for our customers on the Verizon network, we are conducting more extensive testing and certification. As a result, Verizon compatibility on the HTC One A9 won't be available in December as originally expected. We are working with Verizon to make it available as soon as possible.
If you want to change your order, please contact HTC customer support.

Unfortunately, things get stickier yet.

While HTC didn't exactly do a good job communicating it, during the announcement for the One A9 they did state explicitly that the red and gold versions of the phone would be shipping "several weeks" after the silver and gray variants. But then they took pre-orders for those colors anyway, and nowhere on HTC's store was it mentioned that they would ship later. For some of those people that did pre-order the gold version, today's email that they would be waiting until the end of November for their phones came as an understandable surprise, but if you ordered a red version you got worse news, with an early December shipping estimate. Looking at HTC's site a day after the launch, it's easy to see why the long wait may have some people properly pissed-off: you had no reason to know the gold and red would take weeks longer to ship unless you read an article that mentioned it specifically or watched the press conference intently.

The order site a day after launch - note the pre-order button appears for the red version, and no notices about a later ship date.

At some point recently, HTC updated its store to no longer allow pre-orders of the red and gold finishes, and has now added disclaimers about ship dates. The fact that this was allowed to happen seems... irresponsible on their part. 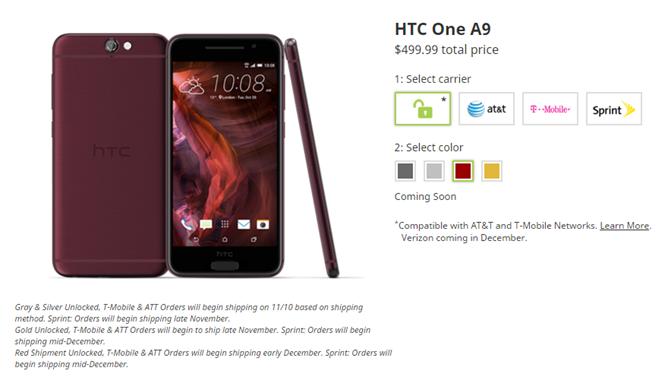 I think HTC's about to see quite a few pre-orders get cancelled.

What makes this even more sour for us is that even after reaching out to HTC's PR team on Tuesday (11/3), we were assured orders would begin shipping on the 6th as originally promised. Nothing was mentioned about any additional delays for certain variants (ie, Sprint being delayed literally by weeks) or colors. But leave it to angry customers: they'll sure as hell tell anybody they can when a company screws up.

Fly Labs, "Creators Of The World's Best Video Editing Apps," Get Acquired By Google And Join ...