The Chromecast is already a pretty fantastic deal for a streaming gadget, and it just keeps on giving. It looks like Google is repeating the $6 offer it extended back in February, giving users six bucks of Play Store credit for each Chromecast and Android TV box associated with their account. The credit stacks - I have both a Chromecast and a SHIELD TV, so I now have $12 in credit just begging to be used. Thanks, Big G.

We've seen this credit activated for both the original and updated version of the Chromecast, plus the SHIELD TV and Nexus TV. Presumably that means that other Android TV devices, like Razer's neglected Forge TV and Sony's Android-powered smart televisions, are also eligible for the credit. The deal is valid in the United States, but as usual, your mileage may vary as to whether you can redeem it in other countries.

To get your credit, head to this address and follow the instructions. Google's system uses the Cast extension for the Chrome browser to detect Chromecast and Android TV hardware on your local network, but Google also seems to "remember" at least some devices that have been connected before but are no longer active. The Play Store credit is redeemable for apps, in-app purchases, movies and television, music, and books - anything that's sold on the store.

It looks like this offer is also good for Chromecast Audio units. Huzzah! 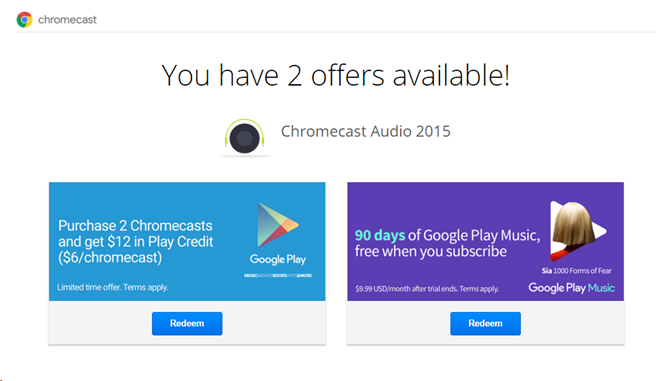