Two of the three-man team from Crossy Road have released a new game in the same casual vein, Shooty Skies. (It's published under a new name, Mighty Games Group, so you won't see it under the same dev listing in the Play Store.) This takes the simplicity and casual control scheme of Crossy Road and applies it to the old-school shoot-em-up genre - think 1942 or Raiden. You control a character sitting in a polygonal plane. Sliding your finger across the screen both steers your plane and shoots, while releasing it will charge up a super attack. Shoot down as many enemies as you can before one of them hits you. 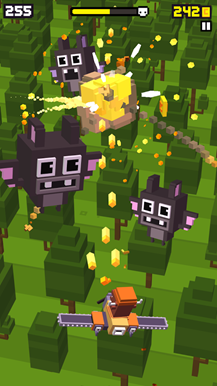 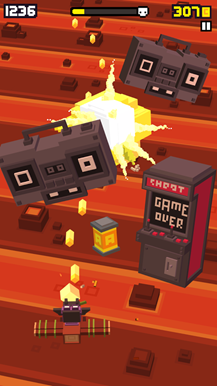 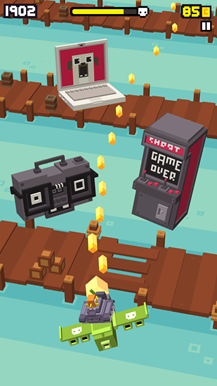 The payment model is pretty much the same: you can wait to earn coins and unlock a random cutesy pilot, or spend a dollar on a specific one. There are also more powerful secondary weapons, and it looks like more characters are cordoned off away from the prize machine. You can periodically watch an ad to get a free continue. It's a little more restrictive than the simple Crossy Road setup, but the important part is that you can still play as much as you like without ever having to spend actual money.

The player-characters and the enemies are whimsical (you'll often be shooting boom boxes and smartphones), and the simple graphics help the game to play smoothly even when the screen is full of bullets, coins, and bad guys. Give it a try if you're a fan of the shoot-em-up genre.