Google offers this year's Nexus phones in a variety of colors, but if you want sparkly pink, you're out of luck. The company figures there isn't enough of a market for that sort of style. Most other manufacturers would agree.

But that's okay. Let your disappointment steer you toward Slickwraps. The site now offers skins for the Nexus 5X and Nexus 6P. And yes, sparkly pink is raring to go.

Other options let you cover your Nexus in fake carbon fiber, wood, metal, leather, camo, comic book superheroes, and a couple characters from Star Wars. You can also snag a few Rainbow X stickers that give the X on your phone a bit of that old-school Nexus flair. 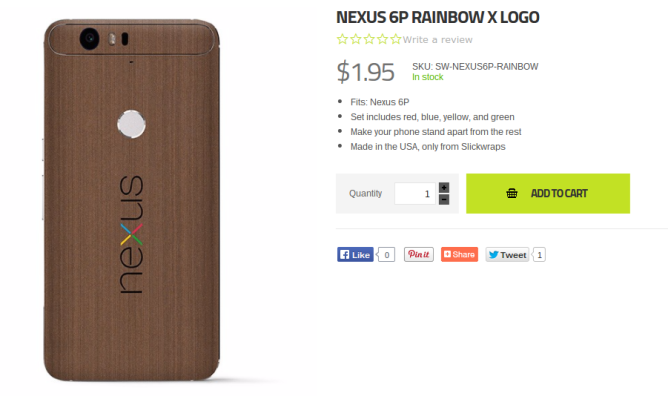 These skins would usually all cost $25, but right now some are going for $10. The Rainbow X stickers cost just $2, but they're currently shipping with every regular skin along with a set of black or white Nexus inlays for free. You can also save 10% and get same day shipping using the code 10NOW.