The Android Auto companion app is generally one of those things you're probably only going to work with a couple of times before you're done setting things up, then it'll stay tucked away, never to be seen again. But that doesn't mean it shouldn't look good and be as useful as possible. An update to the Android Auto app began rolling out today and it's a near total refresh of the user interface. Granted, there's not a lot to change, but it now looks much more like the companion app for Android Wear. But it's not just a new skin, there are actually a couple of functional improvements, too.

It took a little while, but the official changelog has been posted for Android Auto. 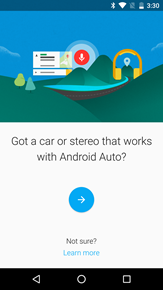 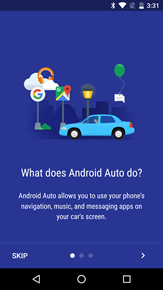 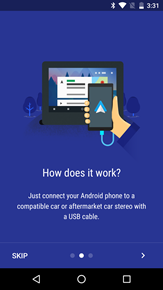 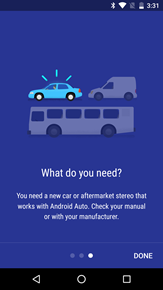 Most of the Android Auto app has been completely redesigned, including a brand new first-run when the app launches. It's not long, just an opening screen to ask if you have a car or stereo compatible with Auto, then a (skipable) 3-pane welcome screen with an overview of what it is. 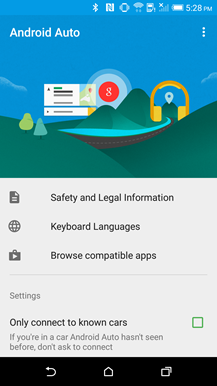 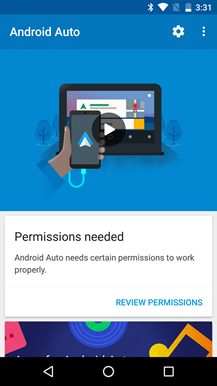 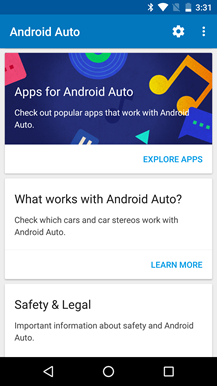 Cards have come in to replace the fairly basic text links on a flat gray background. Most of the items in this stack aren't going to be that exciting, but they are definitely valuable for new users. A large hero image sits at the top with a button to begin a video explaining Android Auto.

If you're running Android 6.0, the next card will launch a series of permission requests for the five things you'll want to authorize so Auto can give the full experience. For those who may be curious, the permissions include: make and manage phone calls, access contacts, access device location, send and view SMS messages, and access your calendar.

The next card is a link to the Play Store that opens directly into a list of apps authorized to work with Android Auto, which are currently still limited to the categories of media and messaging. The final two cards include links to a list of Google's partners in Auto and the safety and legal notices.

Again, none of these are very exciting, but it looks nicer and the card layout will make it easier to add new content in the future. 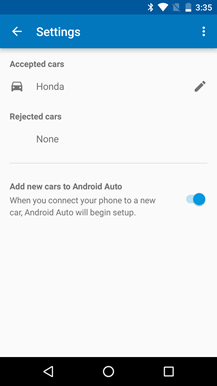 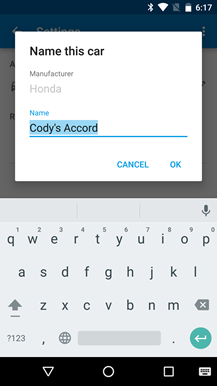 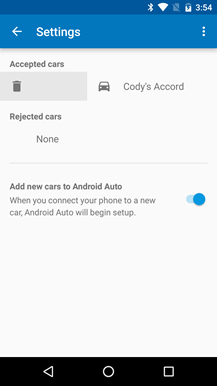 When a phone is attached to a new system running Android Auto, it prompts users to make a semi-permanent decision to authorize or reject that car, or ignore the prompt and have it reappear the next time. In previous versions, if you ever wanted to change a decision, the only option was a button labeled "Forget all cars" that wipes away every decision.

The new version offers a much more efficient and logical way to manage your previously connected cars. Tap the gear icon in the action bar to open a settings screen containing a list of both accepted and rejected vehicles. Cars automatically show up by make, but they can be nicknamed so they're a bit more identifiable. If you want to clear a decision, just swipe an item in the list to the left or right.

There's also a toggle at the bottom that prevents Auto from prompting you at all. This way you can connect to random cars just for charging without being bothered with the setup screen each time.

Finally, a note about developer mode, since a few people will certainly ask. It's still there and accessible in basically the same way. Instead of tapping several times on the lead image, you'll want to give ten quick taps right on the words "Android Auto" in the action bar. Just like before, a toast message will confirm that it worked. But don't expect anything new in the developer options screen, it's identical to the previous version.

Huawei Watch vs. Moto 360 v2: Which One Belongs On Your Wrist?