Android Pay has been kicking around for a little while and it's time for an update. Version 1.1 just started rolling out and it seems to be focused on fixing bugs. There are a lot of little adjustments to text, but no major new features to be seen. Nevertheless, if you use Android Pay regularly, or if you've had issues in the past, you'll probably want to grab the update. As usual, we've got the download link below.

The official changelog has been posted

The official changelog has been posted to the Play Store and it confirms the big bug fix mentioned below.

The most important change isn't visual, but instead it's a fix for an issue that has been bothering a few users. If you're setting up Android Pay on additional devices (anything after the first), version 1.0 may not have shown your loyalty and membership cards until after you've added a credit card on that device. Any non-payment card is supposed to appear universally across your signed-in devices, while payment cards are meant to be added manually on each for security purposes. Version 1.1 fixes the issue, and now your loyalty cards should appear on each device right away, even if you never add a credit card. 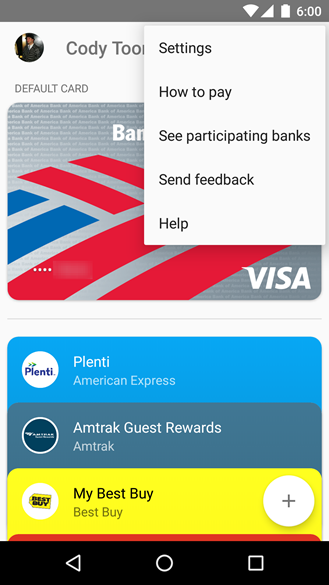 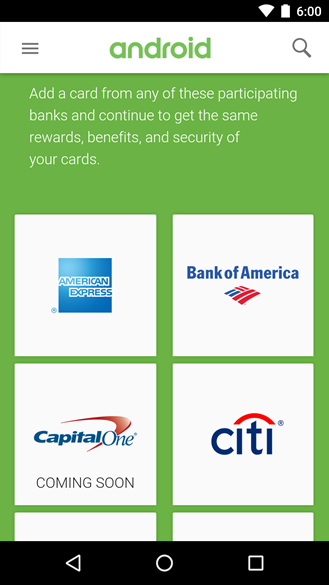 The most notable visual change can be found in an overflow menu on the main screen. Two options have been added to the menu: See participating banks and Send feedback. Neither one is particularly special, of course, but they are there if you want to use them. Send feedback works just like it does in any other Google app, and the option for participating banks just opens up a web browser pointing to the android.com/pay website. 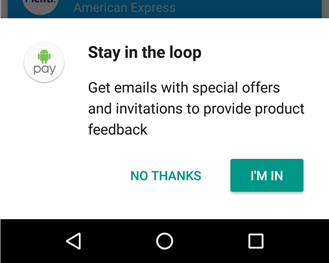 Finally, users are likely to see a "Stay in the loop" pop-up prompt sometime after entering the app. It's a fairly typical opt-in to receive promotional emails and probably surveys.

A teardown also shows that quite a few bits of text have been slightly revised and a few have been added to help explain certain activities in the app, but there's nothing in the way of big new features. If you notice any improvements that we haven't seen yet, let us know in the comments.