I had the opportunity a couple of years ago to review the V5PF (Play-Fi) Wireless Speaker from Wren. The sound quality was absolutely immaculate, and everything about the physical product more than justified its fairly high price tag. The one unfortunate dark spot in the nearly perfect experience came from software – an Android app built by DTS to run its proprietary Play-Fi protocol. It was ugly, amateurish, and unreliable. Two years have passed, and Wren has released the V5US, a new model that not only fixes some minor issues from previous products, but it also combines the features of its three existing variants to produce a single speaker with support for Play-Fi, AirPlay, and Bluetooth. Between new connectivity options and some extended development time for the Play-Fi app, things are looking better.

Music is visceral. It plays an important role in bringing our environment to life and evoking emotion. But if music sounds bad, noisy, or flat, it fails to achieve a meaningful effect. Why else would people invest in high-quality headphones and speakers? Because it's worth sacrificing some extra money to become truly immersed in the music. Wren is building a product for the customers that feel this way.

it's like looking at a 4K TV when everything else is 1080p or below.

The V5 series of speakers are among the best in the consumer market. They're not meant to be ultra-portable and they don't have a ton of flashy lights or shiny trim. They're just meant to be classy looking cabinets that generate brilliant sound.

In terms of audio quality, I could basically parrot back everything I said about the V5PF (Play-Fi model) and it would be mostly true for the V5US. This comes as no surprise because both models are equipped with the same audio package and internal design. Audio reproduction is still spectacular, almost like looking at a 4K TV when everything else is 1080p or below. Clarity is top notch at high volume and doesn't suffer until it's nearly whisper quiet.

There is a new 3-position EQ switch located on the back panel with options to produce full bass or reduce it if the speaker is positioned against a wall or in a corner. My original review noted that bass was a bit soft, primarily because there were no equalizer controls in the Play-Fi app. The V5US seems to have resolved this by boosting the lows a bit. Customers can bump the power back down with the EQ selector, if desired. It's still not the kind of base that will shake the walls, but that's not the demographic this speaker is meant for.

Again, most of what I want to say is a repeat from my previous review, but there are also a couple of new improvements. Wren is aiming for a classy look with the use of very distinctive finishes on real wood cabinets. To say that they look great is an understatement. This time, I received the "Espresso Wenge" finish, which is dark to the point that it appears almost black in anything but direct sunlight. Along with black plastic for the button panel and foam cover, it could easily disappear in a dark corner or a bookshelf. There is also a light Almond finish with silver highlights for brighter environments. 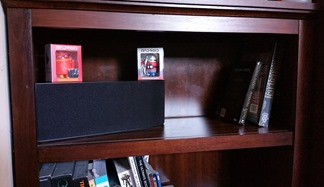 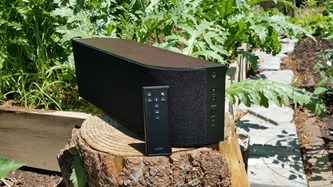 Build quality remains top notch with no gaps or visible flaws. Technically, the dimensions have been nudged by a fraction of an inch on each plane, but the V5US still easily fits anywhere a stack of Blu-ray cases could be placed. Both ends of the speaker have a unique curve that adds a bit more style and allows for a little more wiggle room in tight corners.

This version solves one of my previous complaints. In older models, an external brick was positioned near the half-way point of the power cord, meaning it could be a problem if the speaker was placed on a moderately high shelf with the cable hanging down. The power supply has been moved inside of the speaker and the cable is now a single continuous length.

A remote control was also added with this model. There's no need for a lot of buttons, so the face is fairly sparse. There is a power button, source selectors, volume controls, mute, and a play / pause toggle.

Unfortunately, the remote doesn't share the same design standards as the speaker it controls. The shape is just slightly too wide and thin to be comfortable in the hand, and the plastic caps on the top and bottom stick out beyond the aluminum body.

The buttons are distinct, as well. They aren't some soft foam rubber nubs with barely any feedback. No. These are more like plastic-covered Cherry MX switches that give a definitive thud when they pop down. You'll never second guess whether a button was pressed because your whole finger will feel the strike. This isn't disconcerting or off-putting, per se, but it's certainly unexpected the first few times.

The remote is convenient enough, but I basically stopped using it after the first day because it was easier to reach for my phone. Since all three streaming modes support volume control, there's not much need for the remote unless you're switching sources frequently. If anything, it seems to exist so owners have the option to place the speaker in a higher location where it's not as easy to reach.

The thing that sets the V5US apart from almost any wireless speaker on the market is the array of supported wireless streaming options. This model merges Play-Fi support from the V5PF, Bluetooth from the V5BT, and Apple AirPlay from the V5AP.

Bluetooth is easily the most universal. There haven't been many gadgets sold in the last ten years that can't push audio over Bluetooth. Of course, it's also somewhat lossy compared to Wi-Fi. The V5US (and it's older sibling) support AptX for high quality compression, which certainly keeps audio sounding great; but it has to be supported by both the speaker and the source, and not all devices support it.

Since this is an Android-centric site, I probably don't need to say too much about Apple AirPlay, but I did try it out. There's no noticeable degradation in audio quality and it's simple enough to use. For those who haven't seen it, AirPlay works almost exactly like Chromecast, but it's proprietary and only meant to be used by Apple hardware. There are 3rd-party apps that enable Windows and Android to talk with AirPlay receivers, but they tend to be very buggy and probably aren't worth the hassle. If you've got friends that come by with iPhones or you're sporting a Mac or iOS device, this is usually the best option.

The final wireless option is Play-Fi, a proprietary protocol created by DTS. Play-Fi supports Android (and Kindle Fire), iOS, and Windows. Note: the Windows version is shamelessly crippled unless you shell out another $15 to DTS for "Play-Fi HD."

My previous experience with Play-Fi left me with mixed feelings. On the one hand, there were no signs of audio compression and the sound quality was flawless. On the other, the app was simply terrible. It was ugly, outdated, awkward, slow, unstable, and lacked obvious features. This wasn't Wren's fault, DTS wrote the app and slapped Wren's branding on it. Nevertheless, since the app dictates how people would use the speaker, it was the single, unmistakably tragic black mark on an otherwise nearly perfect product. 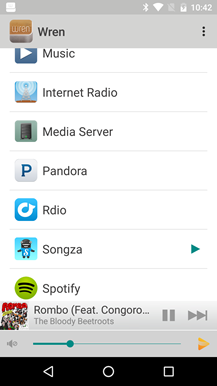 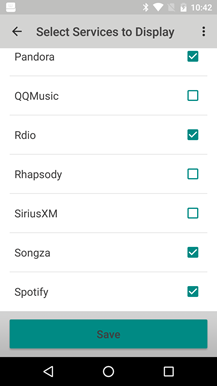 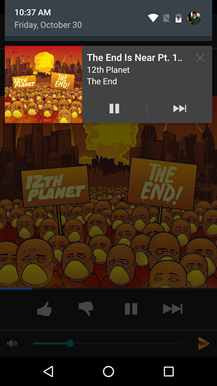 Two years have gone by and I can say this about the app: it's not quite as bad as it used to be. It's still not good by any objective measure, but the worst problems have been worked out. The major crashes and performance problems seem to be gone and there's finally a fully functioning controller in the notification shade. The interface doesn't look like a late-era Gingerbread app anymore, but now uses a mix of custom images and default system elements that just don't work well together. Evidently, this isn't just laziness, both the Windows and iOS apps share similarly bad designs. It's as if somebody tried to follow design guidelines for each platform and quit in a frustrated rage when DTS's own style requirements kept conflicting.

Functionally, the app really isn't that bad. It offers quite a few types of playback options, including support for locally stored audio, DLNA servers, internet radio stations, and on-demand streaming services. The selection of streaming services has improved substantially over the years. My first experience included just three options, and of them, Pandora was the only one to work in the US market. A much more sizeable list is supported now, though some of the services require a paid subscription to use:

It's worth noting that audio quality will vary significantly based on sources. Music from locally stored files and DLNA servers should play with whatever quality they were encoded with. Sadly, the .flac file format isn't supported by the app. (What was DTS thinking?) Many of the Internet radio stations sound as bad or worse than they would if broadcast over FM radio with equipment from the 1960s, but that's just how they always sound. Naturally, the music streaming services land somewhere in between, but most of them are pretty good.

There aren't many products I will gush about, but Wren's speakers actually deserve the praise. Sound quality is about as good as the market has to offer without crossing into the field of professional audio gear (which also skyrockets the cost). There's something about the V5 speakers that makes music come alive in ways that competitors just can't seem to achieve.

Wren makes speakers that spoil you for life.

Then there is the design aesthetic. The V5 series look stylish and classy, and most importantly, nothing at all like the black plastic rectangles most companies manufacture. You're meant to use a Wren as part of your décor, placed somewhere people can see, not buried under a TV or hidden in a corner.

That's why it pains me that the V5US is so expensive. A really good bookshelf speaker shouldn't come cheap, but $499 is pushing the limits of what most people will want to spend. By comparison, the trio of older V5 models have dropped from their launch price of $399 to $299 (Play-Fi) and $249 (Bluetooth / Airplay). Unless you really need all three wireless modes and a remote, the V5US doesn't really offer enough to justify the expense. As much as I love this speaker, Wren effectively undercut its flagship by aggressively pricing the three other models.

Of course, it's this price change that makes the older models incredibly attractive. They still include the exact same audio package and gorgeous exterior, but at a much more accessible price. Do you still want the connectivity options of the V5US? Buy a Chromecast Audio. For an extra $35 you can get practically everything offered by AirPlay and Play-Fi, but with an open ecosystem, many more streaming options, and software that will get regular updates. This is precisely the situation Chromecast Audio was meant for. Just moments into trying the two together, I felt like Chromecast and Wren were a match made in heaven.

To sum up, Wren makes speakers that spoil you for life. If you've got the money laying around, you really can't go wrong with the V5US. Without a doubt, it's one of the best bookshelf speakers on the market. If your budget isn't quite as flexible, I strongly recommend buying one of the single-mode speakers. You can have the same profoundly great speaker and still save $200 or more.

Game Developers: Here's How To Make Your Game Stand Out With A Great Google Play Store Listing