Sometimes in a person's life, they just need a huge phone. And I'm not talking Nexus 6 huge — think bigger. Like, sometimes you just want to be able to talk on something more along the lines of a Nexus 7, right? I mean, even if that's not something you actually want to do, it's now an option with the new Studio 7.0 HD from Blu. Yes, this is a 7-inch phone.

So it's a big phone with otherwise underwhelming specs. I'm sure there's a gap that a phone like this will fill nicely, assuming you or someone you know actually needs a phone the size of a tablet. At least it eliminates the need for having two separate devices, right?

Anyway, the Studio 7.0 HD LTE is available today on Amazon. It looks like they only have the white one in stock right now, so hopefully the other colors will show up soon. Also, I have a review unit on hand, so expect to see my thoughts on it early next week. If you can't wait, though, here's a sneak peek: it's pretty freakin' big. 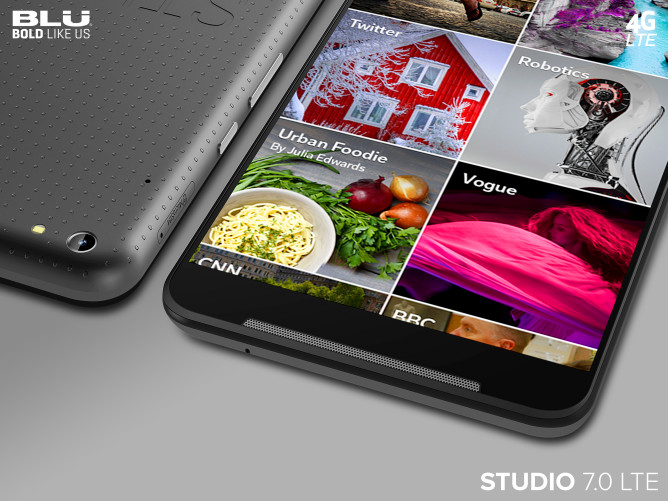 MIAMI, Oct. 29, 2015 /PRNewswire/ -- BLU Products, the market leader in unlocked devices in the United States, introduced today the new BLU Studio 7.0 LTE smartphone, connecting with the best of both worlds by blending a 7-inch screen with a compact design that lets you comfortably hold it one-handed for phone calls, or fitting into your jeans pocket. "The market trend shows that the demand in larger screen smartphones is rising, as a direct result to the standard in a smartphone now approaching 5.5 inches, meaning the term phablet no longer applies to a broad range of devices in the 5.5 inch to 6.0 inch category," said Samuel Ohev-Zion, CEO of BLU Products. "What the consumer wants today is a single device that brings value with an awesome display size and convenience."