That tablet you carry around is so puny. Look at it, fitting comfortably in your hands and sporting not a single built-in handle. Outrageous. Samsung has made the rumored Galaxy View official, and it's very much the opposite of your wussy little tablet. It's big and it has a handle.

Samsung has provided this handy graphic with all the relevant specs for the gargantuan tablet, so feast your eyes. 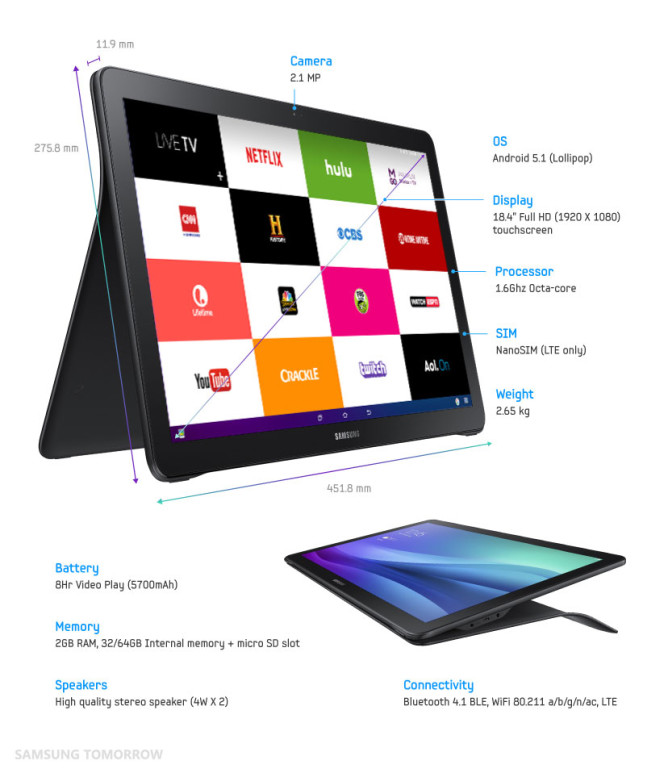 The Galaxy View runs Android 5.1 with a custom video-centric UI that makes a little more sense on the giant screen. That screen, by the way, is only 1080p. The pixel density isn't going to be great, but this was probably the only way to make the View run long enough on a charge and cost a not exorbitant amount of money. It weighs 2.65kg (almost 6 pounds), so it's a good thing Samsung put a handle in the kickstand. I mean, assuming you want to carry around a tablet this size.

Samsung neglected to mention a price for the monster tablet, but a $599 list price for the 32GB WiFi model has popped up online recently.

Logitech K380 Keyboard Review: One Keyboard To Rule Them All (At Least In Theory)