Google launched YouTube Gaming a few weeks back, but you need lots of content to make that service work. Now you can easily record your Android games and upload them to YouTube with the Play Games app (which we spotted in a teardown). However, this feature is only coming to the US and UK for the time being.

To start recording a game, just find it in the Play Games app and press the record button. Video can be encoded in 480p or 720p only. You can also have the app record you with the front-facing camera/mic and put it in the corner of the video. When you're done recording, the app has a basic video editing interface that lets you upload to YouTube. This is also possible in the YouTube Gaming app, but maybe having it in the Play Games app too will encourage more players to use the feature.

This change is rolling out to users in the US and UK in the coming days. It will come to more countries "soon after." It's not clear if this will require a new APK or if it's all server-side. We'll keep an eye out.

The Play Games update is now available on APK Mirror. It appears to enable game recording immediately upon installation, so no server-side magic is required. It's unclear if it'll work outside the US and UK, though. 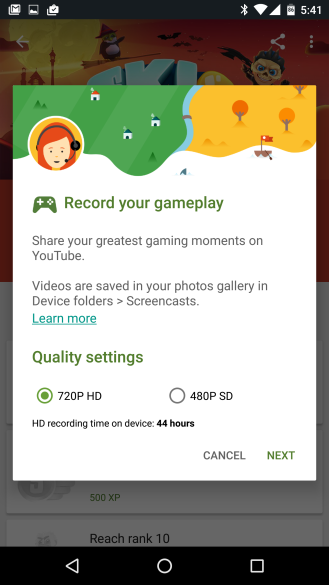 Square Enix Releases Tomb Raider II Like It's 1997, Only This Time The Game Only Costs 99 Cents