Podcasts have been a major part of mobile platforms for years, but Android has never had a native podcast listening experience... until now. Google has just announced podcast support in Play Music, and podcasters can start uploading shows to Google for approval right now. You won't be able to start listening right away, though.

Adding a podcast to Google Play (in the US) is as simple as logging in and pointing Google to your RSS feed. We've already added the Android Police Podcast and are waiting on approval (some have already gotten their listings approved too). Google is working with some larger podcasters like TWiT, Hardcore History, and HowStuffWorks to get shows ready for the new podcast service. 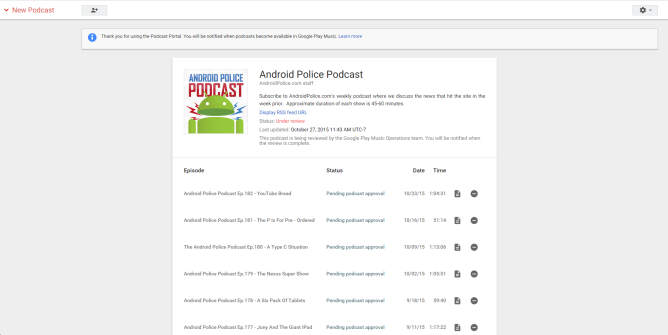 Google doesn't have a firm timeline for rolling the feature out to users just yet. The best we've got is a promise that there will be more details "in the coming months." It will obviously require an update to the Play Music app, and we don't know what sort of features will be included with the service. Time will tell.