It has been a busy month for Google. Marshmallow was officially released, YouTube finally has the subscription service we've been asking for, and some new Nexus phones are shipping. Also on the docket for this month was a new version of the Play services apk. A couple of weeks ago, v8.2.98 began rolling out to a short list of handsets. It was followed a few days later by a .99 release, and then another minor bug fix pushed it up to v8.3.00. There hasn't been a blog post to discuss new features or APIs, which is a bit unusual, but there are a few interesting bits in the apk waiting to be seen.

Smart Lock, Google Accounts... and Nearby?

Long-time readers know that Google spent what seemed like forever incubating both Nearby and Smart Lock. Making appearances in a few leaks and a number of teardowns, both features have been the center of attention many times. However, despite some functional similarities, they've remained largely independent. Now there is a hint that they might be coming together.

Here's the catch... I haven't got any idea what they're actually going to do. The new strings share a common prefix with many others that are used for Nearby, and the actual text simply reads "Smart Lock for Google Accounts." The strings are also referenced in the code for Nearby. Unfortunately, there really isn't much more to go on.

It's possible this is a bit of a red herring and these strings will simply become part of a newly remodeled settings screen. On the other hand, the name raises at least one flag: Smart Lock is a per-device setting and hasn't really had a direct link to Google Accounts. The fact that the two appear in the same title, especially in combination with Nearby, doesn't match anything we have right now. I would expect something new is coming.

We've got another possible mystery feature. Another set of new strings appeared with "profile_merge" in the name. Unlike the previous section, this one seems a little easier to guess, but with a catch. Back in Android 4.2 (a.k.a. the Middle Jelly Bean), Google added multi-user support. This gave people a way to share a single tablet using distinct pockets of storage for settings, apps, and data. Multi-user was initially exclusive to tablets, but Android 5.0 Lollipop brought it to phones.

Judging from the strings, it looks like users will soon have an option to merge separate profiles. Why is this useful? Well, maybe a few roommates are sharing a tablet and one moves out, but some of the things in their profile should be kept around for another roommate to use. There are surely hundreds of little corner cases where this function might be important, so it's not unreasonable to add it.

I do have one big reservation about this theory. Profiles are implemented as a part of the operating system, and while the Google Play services app has nearly unlimited access, it would be fairly strange for an implementation of profile merging to be delivered through an app update rather than with a firmware update. Imagine if an OEM were to build a feature on top of profiles, a merge could be severely destructive if it's not handled correctly.

Perhaps this refers to a different kind of profile, but no other type comes to mind. Whatever this is, there seem to be only two options: merging and undoing a merge. Since undo is offered, it strongly suggests that a merge operation is non-destructive.

Have you ever received a picture or screenshot along with a message commenting on something you're supposed to see, and even after looking for a minute, you've got no clue what the sender is making a fuss about? Now imagine thousands of messages like that and you'll have some idea of what Google receives for user feedback every day. To make things a little more meaningful for the people that sift through these reports, the Feedback interface is going to gain some new tricks to add a little more context to screenshots.

The Feedback screen in some apps like Play Music and YouTube can automatically generate a screenshot right before the screen is loaded (pictured below). The idea for this new feature is pretty simple: users will be able to make very basic modifications to that screenshot before submitting it. The changes will be limited to highlighting relevant parts of the image and blacking out sensitive information. It's not a particularly exciting change, but it could dramatically improve the usefulness of error reports and glitches, and that means issues can be fixed faster and more reliably. 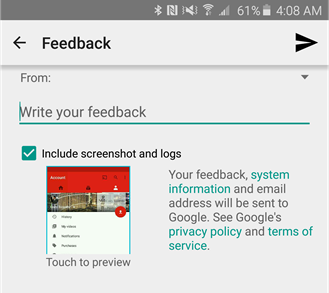