Fingerprint reader support is one of the big pushes of Android 6.0 Marshmallow, but it's not just limited to the lock screen. Google has an option in the Play Store to authorize app purchases with a fingerprint, which we first spotted in a teardown of the v5.9 client. Now it's live for 6.0 devices that have fingerprint readers like the Nexus 6P and Nexus 5X.

The fingerprint reader option is disabled by default, which I find odd. There's not even a prompt to let you know it's there. To activate, go into the Play Store settings and look under User Controls. When you activate fingerprint authorization, you'll have to enter your Google password to confirm. From that point on, authorizing a purchase in the Play Store can be accomplished with a tap on the fingerprint sensor. You also have the option of using your password by tapping the button at the bottom of the prompt. 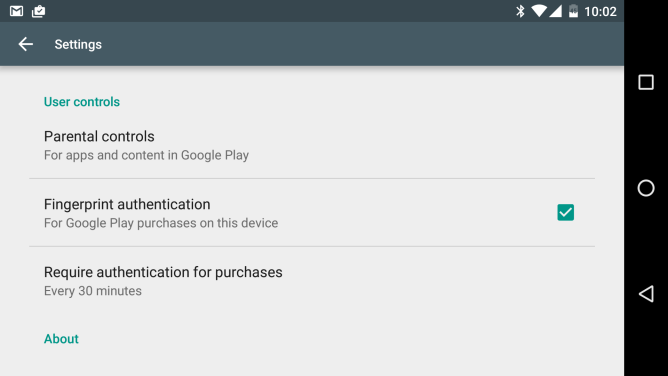 This requires Android 6.0 and its fingerprint APIs. You'll also need a fingerprint scanner, obviously. Both new Nexus phones work, but any future Marshmallow devices with a fingerprint sensor should support the feature as well.

Editorial: YouTube Red Is A Fantastic Idea, Please Ignore People On The Internet Who Hate ...