Until now, the best way to know if an app had support for Android Wear was to install it and see if it showed up on the watch. There's a much better way now—just look for the watch icon. Google is rolling out a small tweak to the Play Store on Android that displays a small watch icon and notice in the details when an app supports Wear. 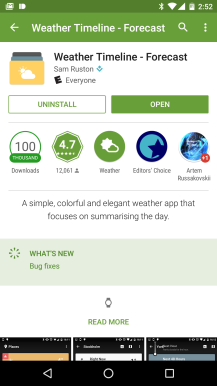 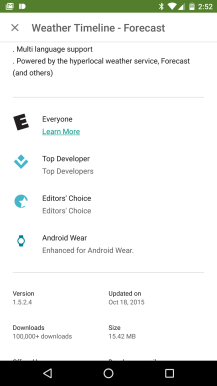 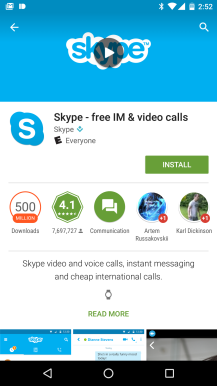 The icon appears in the collapsed details area right above "Read More." When it's expanded, you'll see the icon again down at the bottom next to the parental rating. It'll say, "Enhanced for Android Wear." We're seeing this on most apps with Wear support, but weirdly, some of Google's own apps like Keep and Hangouts aren't showing the icon. Maybe the changes are still rolling out.

It sounds like some users started seeing these icons a few days ago, but now it's hitting all devices as a server-side change. There are no watch icons on the web Play Store yet, but I imagine it will start showing up there too eventually.