For a company that sells so few phones, OnePlus sure knows how to make the biggest noise with the smallest thing it does. Building on controversies propelled it to the top of many tech news cycles, but it seems that its marketing department has calmed down a little lately. The latest trick to come out of it is #TakeTheEdgeOff, a swap offer for Samsung owners. It sounds compellingly obnoxious, except that on the OnePlus scale of crazy, it's a moderately bland jab.

They're not asking you to destroy your phone, but to donate it to a charity. And not everyone can get involved, only 50 "winners" will be selected, though I'm not sure winner is the proper term when you're exchanging a Galaxy S6, S6 Edge, S6 Edge+, or Note 5, for a OnePlus 2. At best, you're a weird philanthropist. At worst, you're down a couple of hundred bucks in the exchange because you were none the wiser. But all things considered, it's a rather boring campaign that has nothing going for it except the smart-ass hashtag. 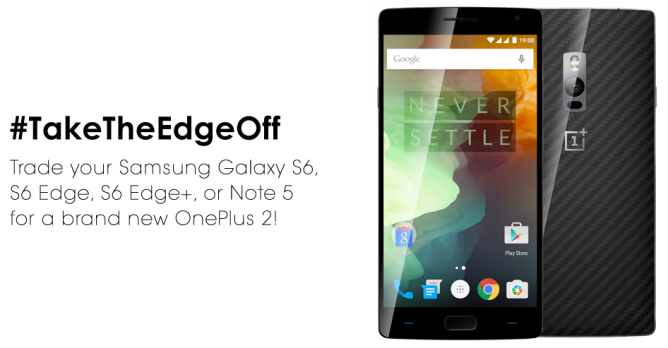 But things got interesting when Meizu, another Chinese OEM, decided to get its hands dirty with OnePlus. So you guys think you can switch people from Galaxy flagships to a OnePlus 2? How about we try to take those OnePlus 2s off people's hands, shove them somewhere that the terms and conditions don't explain, and give out a Meizu Pro 5 instead? And what if, to rub it off, we do some clever word play with your slogan and call our campaign #TurnTheHeatOff... because Snapdragon 810?

Shit just got real y'all.

And it's not like Meizu doesn't have a leg to stand on. While you may have vaguely heard of the company, you should know that in January of 2015 it sold 1.5 Million devices, while OnePlus with all of its noisy me, me, me! only sold 1.5 Million phones throughout the entire year of the One's release. In 2015, Meizu is expecting to ship 20 Million phones, so it isn't exactly in need of converting a few OnePlus owners to get its bottom-line, but the campaign is sure to garner it a few raised eyebrows mostly from foreign media, which ... come to think of it, is just what we're doing now. Alright Meizu, you win, we took the bait.

So what's that Pro 5 that's being offered? A surprisingly decent phone. It is actually on par with the OnePlus 2 and even surpasses it in some regards. It has a 5.7" 1080p screen, runs on an Exynos 7420 processor (14nm FinFET technology), with two configurations of storage (UFS not eMMC) and RAM (LPDDR4) : 32GB/3GB and 64GB/4GB. There's a fingerprint sensor on the front, a 21MP camera on the back with laser autofocus, a USB Type C port on the bottom, and a MicroSD slot. It runs Android 5.1 with Flyme 5.0 OS.

The Pro 5 supports fast charging at 12V/2A, which the OnePlus 2 doesn't. The biggest blow would have been if it had NFC, but nowhere on the spec sheet is that mentioned. Update: It seems to have NFC despite it not being listed in the specs. Still, from what I can see, you're getting a good deal with this swap. The only thorn in the Pro 5's side is that it looks like a surprisingly close replica of the iPhone 6, which may make it seem like a cheap knock-off instead of a legitimate Android device in its own rights.

Kudos Meizu. Not just for fighting dirty, which we kind of find hilariously petty, but for piggybacking on OnePlus' inexplicable media blitz and highjacking the attention to your own device. Otherwise, most of us would have never heard of the Pro 5 and that's a damn shame. It sounds like a good phone, at least on paper.

Alternate title: It's Getting Hot In Heeerre, So Lemme Take Off All Your Phones... With A Little Bit A (OnePlus 2), Give A Little Bit A (Pro 5), I Like It When Ya (Meh, Zuh)

Sony's Xperia Z3 And Z3 Compact Marshmallow Concept Is Now Live For Testers, And You Can Try It ...