Samsung Pay is an interesting approach to this whole mobile payments thing. You don't have to wait on retailers to roll out support. Sure, you can use NFC in stores that are hip enough for such shenanigans, or you can use magnetic secure transmission (MST) to pay at terminals that would otherwise only accept debit and credit cards.

Samsung Pay launched last month, but the feature wasn't actually usable until carriers enabled support. And they did, except for Verizon Wireless. Well, now the hold out is pushing out updates to the four Samsung devices that have the hardware necessary to use MST: the Galaxy S6, S6 Edge, S6 Edge+, and Note 5.

Verizon is also taking this opportunity to push out Stagefright patches to the same suite of phones. While we're on the topic of security, a week ago Samsung started up a blog dedicated to Android software patches. After following Google in announcing a new monthly update policy this summer, Samsung has now provided details on its first release, SMR-OCT-2015. Samsung says the Galaxy S, Note, and Tab series can expect monthly updates going forward.

Earlier today the Samsung Pay app appeared on Google Play, though it has since gone away. Here's a shot taken on a Nexus 6 with an AT&T SIM while the app was up. 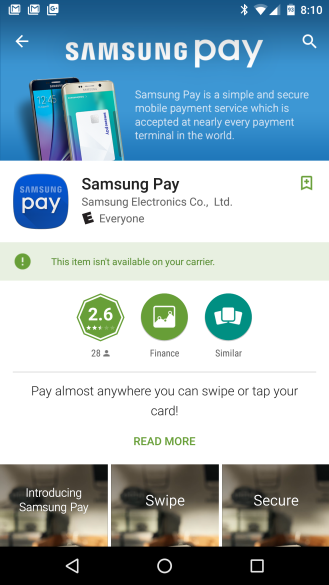 Changelogs are available at the Verizon links below, though the carrier hasn't updated all of the device pages just yet.

Google Will Require OEMs To Include Unmodified Doze Mode In Android 6.0