The benefits of USB Type-C are still unclear to me. I mean, I get that it's universal and reversible, but right now it's just another cable to have around. When it becomes more ubiquitous, though, Type-C might be most useful when the time comes to charge up your gadgets. The new Nexus phones offer a taste of this future with support for USB power delivery, allowing them to both send and receive power.

When you connect two (supported) USB Type-C devices via a C-to-C cable, you have the option of charging one with the other. Android puts the settings for this in the notification shade with options for the device to charge, act as a power supply, and transfer files (MIDI too, but that's a different story). Testing the two Nexus devices, we found you can pick one of them to act as a power supply and the other charges. This would be very handy if you had a Type-C tablet with a big battery and your phone was almost dead. You could also go the other way or give a friend's phone a little more juice. It's like having an external battery pack with you all the time. 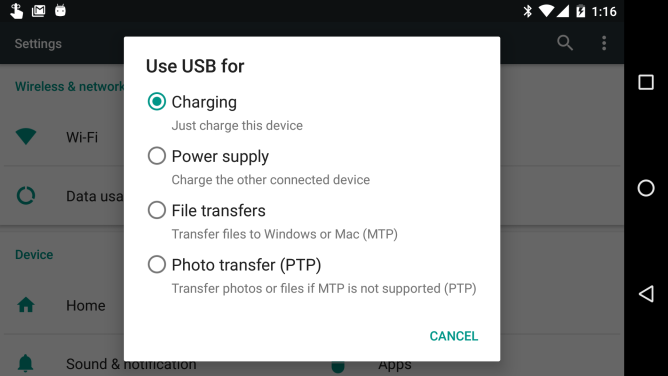 Here's the rub—it doesn't seem to work perfectly on other USB Type-C devices right now. I tested this with a ZenPad S and OnePlus 2, both of which have a Type-C port. The ZenPad would only charge the Nexus and the OP2 would only be charged by it. Selecting the other option on the Nexus device didn't do anything. The charge rate is also slower than with the two Nexus devices (Ampere isn't entirely accurate, but it's clearly slower than a regular charger). The weirdness is probably because of software (i.e. not Marshmallow), but these devices might not have full support for the USB power delivery standard at all. The Nexus phones do have that, though, and it's going to be really cool down the road.

Android 6.0 Will Finally Require Manufacturers To Enable Full-Disk Encryption By Default On New ...