I've been getting to know the Nexus 6P for a few days now, and while I don't feel a few days is enough time to write a complete review, I thought it would at least be helpful to write a review preview with initial impressions and findings from the new Nexus.

The Nexus 6P is undoubtedly the more "premium" of the new Nexus phones this year. While the 5X is meant to carry on the affordable and performant legacy of the original Nexus 5, the 6P has perks like 240fps slowmo video, a higher-specced (if somewhat embattled) processor, true stereo front-facing speakers, a bigger, denser display, and an all-metal body. So far in the review process I've been trying to find out what's wrong with the 6P, because so many of the boxes are checked when it comes to things I want and hope for in a device.

In this post we'll take a quick look at some of the basics and save for the full review things like battery, which will take longer to measure.

The Nexus 6P, despite being made of metal, is actually a little lighter than the Nexus 6 (about 6 grams lighter actually). This is of course due in part to the fact that the 6P is narrower (and thinner) than the 6. The 6P is a tad taller though. The narrower-but-taller dimensions really change the balance of the device. Its height doesn't feel too weird, but its width makes things like gesture typing with one thumb a lot easier. This is a task I found nearly impossible on the Nexus 6 on the best days. 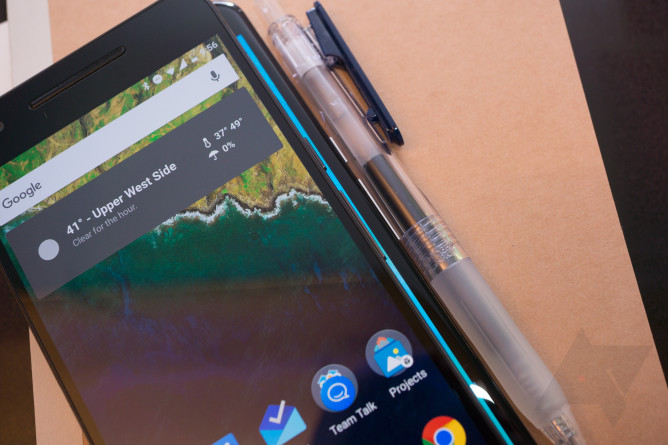 From the front, the device is predictable. Glass covering black bezels and a big display, and front-facing stereo speakers. On the right are the power and volume keys, on top is a headphone jack, and on the bottom is the USB-C port.

The back is where things get interesting. There's a printed Nexus logo (putting to rest the inlaid letters of Nexus' past) the Nexus Imprint scanner (which blends really nicely with the rest of the body), and that camera hump. 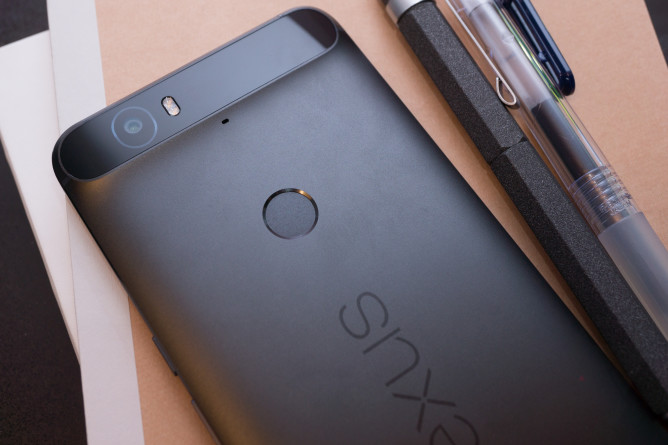 I have to say that the pre-announcement leaks showed the bump in a worrisome light, but in reality it's much less pronounced than it looks in photos, and actually makes a nice gripping point for grabbing the phone out of your pocket.

One interesting thing about the 6P's design is that it doesn't carry over the same design paradigms found in the Nexus 5, 7 2012 and 2013, and Nexus 9. And it obviously doesn't look much like Moto's Nexus 6 either, in terms of contour. But it does have those front-facing speakers. It isn't shocking to see a uniquely designed Nexus (they all had very different looks until the Nexus 5 actually), but it is interesting to consider.

The 6P (like the 5X) also has a notification LED that can be switched on without any modifications to the device. Just go to settings > sound & notifications and toggle "pulse notification light." Personally I'm a big fan of LED notification lights, and if you find that ambient display is too distracting, this could be a good option to still find out when you have notifications. The light isn't in the same spot as previous Nexus devices, but it's there and it works and that's what's important. 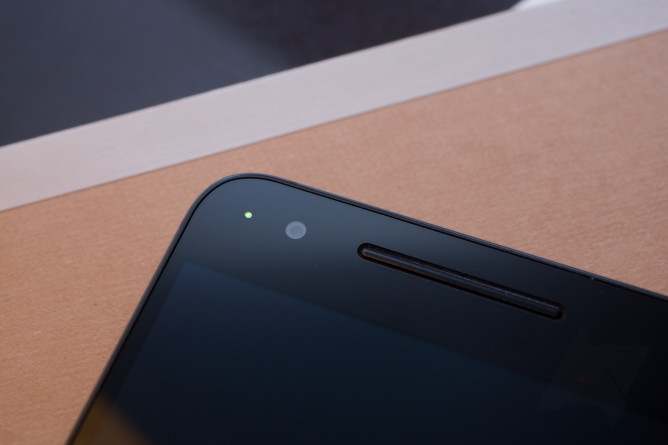 There's probably not a lot I can say about Imprint that you won't read in Ryan's look at the Nexus 5X, but I'll discuss my experience with it so far anyway.

First, the setup process is baked right into the initial setup wizard for the device. As Ryan pointed out some other devices require many many touches to register a finger. TouchID in iOS for example requires tons of touches, and toward the end of the registration - if iOS doesn't feel you've done a good enough job - a touch will register and then kind of "unwind" from the progress meter, which is really annoying. Imprint doesn't do that. Whether that impacts accuracy I don't know, but I do know that Imprint works really fast and really well. It's very hard to demo since the scanner is around back, but I'm super glad it's around back. It's this writer's opinion that adding something to the front of the device just to accommodate the scanner would be a big design sacrifice, and my finger gravitates to that area on the back of the device anyway. 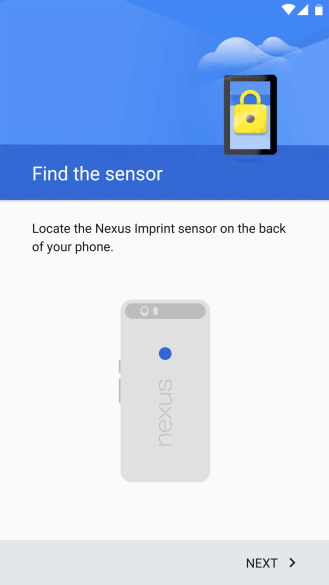 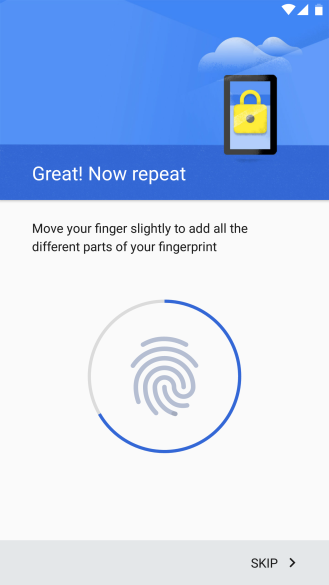 But that can be a double-edged sword. Grabbing the phone or putting it in my pocket, it's very easy to touch the sensor. I'll either touch it with my index finger, unlocking the device, or touch it with the wrong finger getting a little "buzz-buzz" to let me know it doesn't recognize that finger. A single buzz means your fingerprint worked.

So far I haven't had much trouble with unlocking the device, and in fact I use the power button pretty infrequently as a result. It's faster and more pleasant to simply touch the sensor to wake the device all in one step.

Like Ryan, I don't feel prepared yet to give a full analysis of the camera, but also like Ryan I'll say that results so far look pretty good. As a Nexus, the 6P is star-crossed when it comes to the camera, right? I would argue that simply isn't so this time around.

Whatever is going on in there (be it the larger pixels, laser autofocus, or better processing), it's good. The camera performs really well in daylight, surprisingly well in medium light, and performs as expected in true low light.

I will say that, so far, the shutter seems to struggle sometimes in low light, which is understandable - something has to suffer for the exposure to look adequately bright. Images can also vacillate between nice dark exposures in true low light (like the first image in the set below) and exposures that seem to meter more for the sky (like numbers 3 and 4), which results in a lot of noise. But touching the object you want to meter for generally does the trick.

But in almost all other conditions the camera seems to perform much better than I'd expect. In the full review, I'll have some comparison shots with the Nexus 6 and iPhone 6, but for now take a look at the samples below and just view them objectively. I shot these photos in full auto, how the camera app comes out of the box (minus flash), so HDR+ Auto is on.

Be sure to click into our picture viewer to see the images at a better resolution. I can't write even a preview review of the 6P without talking about its display. Personally, I obsess over displays on new devices. If I'm buying a device that I'll check up to a hundred times a day, I want it to look brilliant, and the 6P's display does. As we know, it's using the same generation panel as Samsung's Galaxy Note 5 (whatever deal Google and Samsung made, I applaud). It's bright and vivid as you'd expect, and crystal clear thanks to the 1440x2560 resolution jammed into the 5.7" display.

Plus - as a bonus - there's a toggle in developer options for "sRGB mode," which evens out the Super AMOLED's affinity for over-saturated colors. The difference isn't huge but it is appreciable. 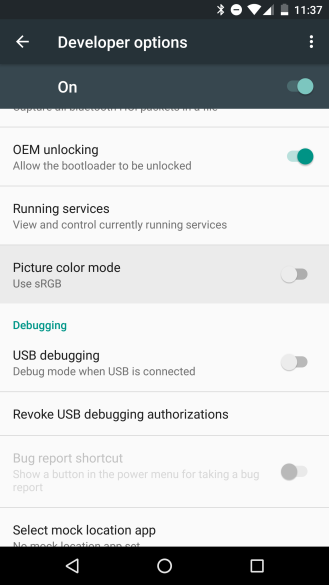 There's no really good way to demo speakers for a review, but I will say that they sound great, just as the N6's speakers did. I pushed them all the way up to top volume (which is honestly louder than I want it to be for close-range use), and they still sounded clear and pleasant. I'm no audio expert, but if going headphone-less with your phone is a common use case, you won't be disappointed with the 6P's performance.

For some prospective buyers (myself included, though I already ordered), the Snapdragon 810 under the 6P's hood is a big concern. After all, we've heard for a long time that the 810 gets really warm and in some cases is subjected to significant throttling to get around the heat issue. I can't really comment in detail yet about how the 810 is performing under stress in the Nexus 6P, but I will say the only times it's been noticeably warm are during initial installing of my apps (incidentally I was using the phone the whole time too), and one other time when I was using the device pretty heavily for about half an hour. Other than that the 810 hasn't really made its presence known to me, but we'll see how this plays out as I get to know the 6P better.

That's basically it for the review preview. In the full review we'll take a deeper dive into the device and how it's working out after a little more daily use, including battery and performance observations. In the meantime, do you have any burning questions? Drop them in the comments below and I'll try to answer them for the full review!

[Weekend Poll] Did You Pre-Order A Nexus 5X Or 6P?