The 2013 Nexus 5 was a much beloved device—it was great at a few things, good at others, and cheap enough that its shortcomings didn't seem so glaring. It struck such a good balance that many owners passed on the (humongous and expensive) Nexus 6 last year. Now, there's the Nexus 5X, a spiritual successor to the 2013 Nexus. I haven't had the 5X for long enough to give it a proper full review, but I've got some impressions to share in advance of the review.

The Nexus 5X is definitely the less premium of this year's Nexus phones with a plastic shell that's pretty similar to the Nexus 5. Just like the Nexus 5, this phone has a soft touch plastic back, but I think the most striking thing about it is that the back doesn't have the slightly mushy quality of the Nexus 5. It's like a solid piece of plastic rather than a rubbery covering over another layer. My review unit is the white/black panda-phone, so I expect the black one will be a little softer to the touch. The lighter soft touch materials are usually smoother to avoid staining.

The power and volume buttons are along the right edge and they're made of the same smooth plastic as the rest of the edge. They feel okay, but I think the Nexus 5's ceramic buttons are more interesting. That said, the 5X's buttons are extremely tactile and easy to find by touch. They sit well above the frame of the phone and there's no rattling around as there is on some phones. 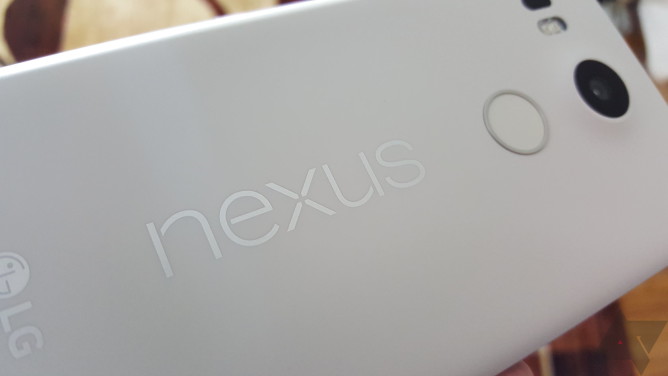 It's refreshing to pick up a phone and not have to rationalize the weight. Devices like the Moto X Pure, OnePlus 2, and Note 5 are heavy, but they're big phablets. You expect that and you have to live with it. The 5X is compact (at least by today's standards) and weighs a mere 136g—that's about the same as the first gen Moto X (4.7-inch screen). So the 5X is surprisingly light, but it's still a solid (if plastic-y) build. There's no flex or creaking when you give it a squeeze.

I'll talk about how the fingerprint sensor works in a moment, but I feel like the position of the sensor is important to the design. Something that Motorola has gotten right for the last few years is the dimple on the back of the phone. This acts as what's known as an internal precision grip. It helps you stabilize the phone in your hand, and the Nexus Imprint sensor on the LG-built 5X is similar. There's a low ridge around the periphery of the sensor, providing just a little friction to keep your finger in place.

Most phones that have a fingerprint sensor include a somewhat painful setup process that requires you to tap the sensor roughly a thousand times. Okay, it's more like 20-ish, but each one takes a pretty long time. Nexus Imprint on the 5X is much faster to set up. I registered both index fingers on the 5X, but you can do more if you want. I'm not sure why you would, though, because the sensor is really positioned best for your index. Using any other finger seems awkward. 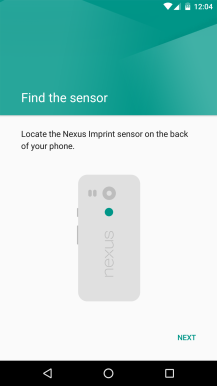 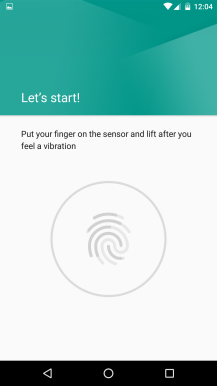 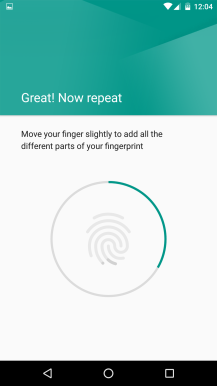 I love that you can just tap the fingerprint sensor while the phone is asleep and the phone unlocks and wakes up. So far, this has been absolutely bullet proof. It never fails and works almost instantly. It's maybe a little too fast at times. I've accidentally brushed the sensor as I slipped the phone in my pocket a few times, resulting in the screen waking up. It's not really a problem as I'm sure it's something I'll get used to not doing. It just illustrates how stupid-fast Nexus Imprint is.

I've been testing the 5X's camera as often as possible since I got it, but I'm not ready to give you a definitive opinion on how it performs. What I've seen so far is encouraging, though. Outdoor shots are great, of course, but indoor ones seem above average as well. Nexus phones have always had mediocre camera quality, especially inside with less than ideal lighting. I have a few sample images here for you to evaluate, but based on what I've seen so far, the 5X camera seems great at capturing detail without over-sharpening (see the frost crystals on the grass below) and low-light images aren't too noisy (Fi card and dog). There's a bit of a yellow tint with lower light, though. 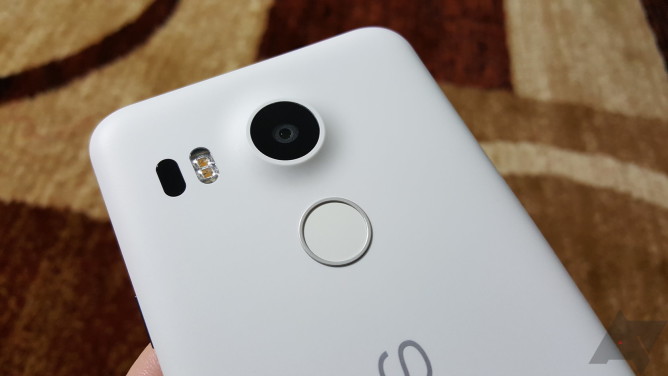 Image captures are basically instant in good lighting, even with HDR+ enabled. In less than ideal lighting, shutter lag isn't any worse than most phones. For a Nexus, that's a big improvement. However, if you take 3-4 HDR+ images in a row, the camera app seems to lag noticeably. I suspect this is because all those photos are being processed in the background. This might be a bug of some sort because I don't think the system should be as bogged down by HDR+ as it appears to be. The 5X's Snapdragon 808 doesn't have as much raw power as an 810, but the HDR lag probably can't be entirely explained by this.

The laser autofocus seems very accurate, but not unusually fast. I'd place it about on par with the phase-detection system in Samsung's phones. Depth of field seems in line with flagship phones that cost a lot more. The camera launches quickly with the double-tap power button shortcut. It works if the phone is asleep or awake—you're ready to take a picture in under two seconds (camera launch and focus). This camera lacks optical image stabilization, as well as electronic image stabilization like the 6P has. This doesn't seem to cause issues in good light, but longer exposures indoors with HDR+ can get fuzzy. The Nexus 5X uses a 1080p LCD, just like the Nexus 5 of yesteryear. The colors aren't as rich as you'll get on the 6P's AMOLED, but they look good for an LCD, I think. Certainly better than the Nexus 5's somewhat muted colors. The colors do lean a bit warmer than most LCDs, though.

The contrast and black levels are above average for an LCD. That's something you notice with ambient display mode. I appreciate this feature in the abstract—it's a great idea. However, the screen still seems too slow to wake up on the Nexus 5X (just like the N6). It just takes a beat too long for the screen to come on when you pick the phone up. Compare that to something like Moto Display, which is reliably instantaneous, and it's rather annoying.

The Nexus 5X seems like a good phone so far. I won't know how good until I've spent some more time with it. I'm somewhat concerned about the camera lagginess. I'll have to test that more thoroughly before I can render a verdict. Performance doesn't seem bad in general, though. I know there's concern about the phone having only 2GB of RAM, but I haven't had any problems yet. As for battery life, early impressions are good with Android 6.0. I'm using the 5X daily right now as I work on the review, so I'll have have more to say about the battery life then. 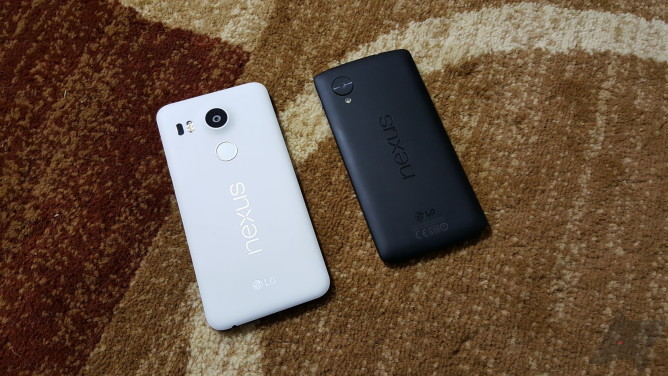 That's it for the review preview, but if you've got any specific questions, drop them in the comments and I'll try to address them in the review or reply if I have time.

Nexus 6P Review Preview: So Far, It's Everything I'd Hoped

Huawei Shares Which Phones Will Receive An Android 6.0 Update, In China At Least