The official changelog has been posted on the Play Store.

A winner is you! New features:
• Mobile Capture! Live stream or record your mobile games. Host your stream with your selfie cam and record your commentary with your phone’s microphone. (Lollipop and higher)
• Faster discovery of live streams for games in your collection
• Support your favorite creators with Fan Funding (just tap "$" and choose your tip)
• Easy video bookmarking with Watch Later
• Import existing subscriptions from YouTube via Settings
• Performance improvements and bug fixes

Google also wrote a blog post to describe the features. Check it out on the Official YouTube Blog. This feature should need no introduction. If you've got a great gaming session planned and you want to broadcast it to the rest of the world, this is for you. YouTube Gaming will allow you to record a video of your screen while playing and optionally live stream it directly to YouTube for your fans to enjoy.

We've known for a while that screen recording and screencasting would be a feature of YouTube Gaming at some point. A teardown of the original YouTube Gaming app gave away the secret a while ago, long before Google announced it at the Tokyo Game Show Keynote (the video has been taken down, but it is discussed in a Play Games teardown a few days later).

To start a recording session, just open up YouTube Gaming, tap on your profile picture in the top right corner to open a dropdown menu, and tap on Go Live. Follow the prompts, pick a mode (Record or Stream), video quality (720p or 480p), and the app you want to record. You can also choose to record anything on the screen. You'll also have an opportunity to add a name and description before you begin. Once you're through the setup procedure, your game of choice will immediately launch and you can begin at any time. 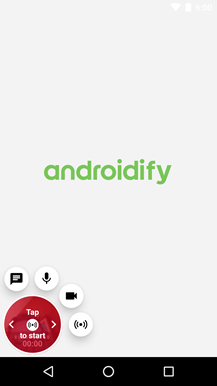 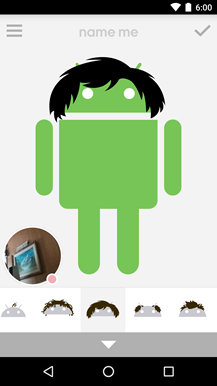 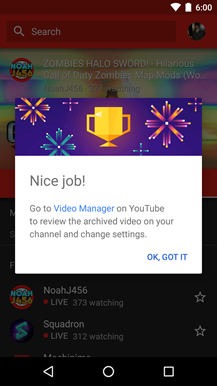 Recording done with Androidify...because that phone didn't have any games installed at the time.

A floating interface will appear in the lower-left corner before your recording session truly begins, but it can be moved around the screen with a long-press. It shows four small bubbles which serve as toggles for different aspects of your session, including: comments, microphone, player camera, and start/stop recording.

Once you actually begin recording, the bubbles fade away leaving just the main circle. Tap on it to temporarily bring the toggles back. If you enable the front-facing camera, a miniature view of yourself (or whatever the camera actually can see) shows up in the main circle. There are also small arrows at the sides of the circle that cycle through a few video filters that apply to the camera stream. This might be a nice touch if you want viewers to see your face while you play, but want to switch to gray scale or a color profile that's more suited to the game you're playing.

The interface is very simple to use and works well. Performance may be the sticky issue for a lot of older and budget-oriented devices. My Nexus 5 (2013) stutters a little bit while streaming 720p and running the Androidify app, so I expect some of the more intensive games are going to push the limits. Of course, that's a two-year-old phone and the streaming quality is set fairly high. Most flagship phones purchased in the last year or so, and any mid-range and above from this point on, should have no trouble keeping up.

Now we just need screencasting from the nVidia SHIELD to really make some waves. Why again is there no Android TV support? 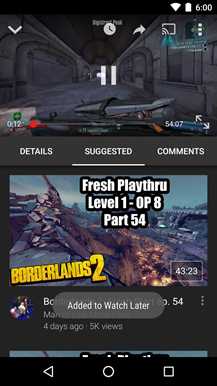 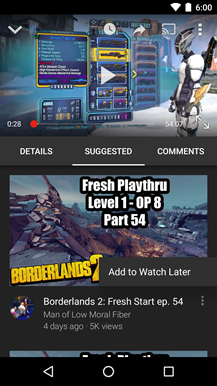 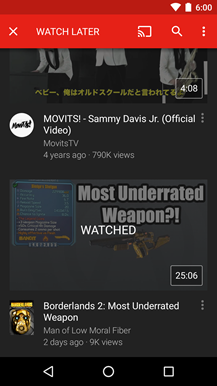 For those that have no experience with it, Watch Later is a simple list where users can keep track of videos to enjoy in the future. If this wasn't obvious from the name, you may have suffered a head injury and should seek immediate medical attention.

Videos can be added either from their individual overflow menus or from a button on the video playback screen. You can reach your list of videos to watch later in the dropdown menu attached to your profile picture. It's almost exactly like using the regular YouTube app. Strangely, the list of Watch Later videos is shared with YouTube proper, so you'll probably see some non-gaming content mixed in. 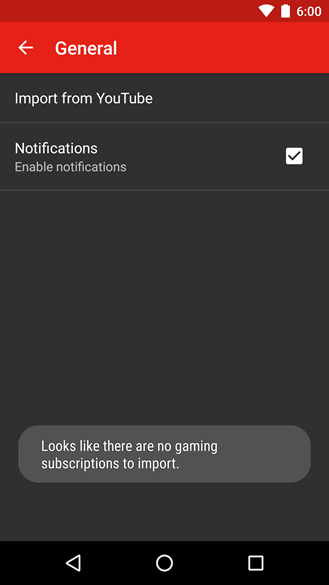 Look at that, at least one person doesn't subscribe to PewDiePie.

The final addition appears to be a simple import tool that can quickly and easily transfer your gaming-oriented channel subscriptions directly into YouTube Gaming. This is probably a feature you'll only really use just the one time, but it can be handy if you want to sync up a handful or more of your favorite channels.

There's still a bit more to talk about, but I'll save that for a teardown. Stay tuned.

[That Was Fast] LG Announces Android 6.0 Updates For The G4 Are Starting Next Week With Poland ...