Sometimes you want a speaker that can go with you. But other times, you want something loud and powerful for use at home, and oftentimes those speakers aren't one and the same — if it's small enough for travel, it's rarely powerful enough for home use. Conversely, if it's powerful enough to fill the house, it's not really suited well for travel. And of course, that all goes without mentioning the stylistic differences between speakers made for on-the-go use and those designed to spend most of their time on a shelf.

While I've spent the majority of my time with Bluetooth speakers designed for portability, today we're going to take a look at a super sexy bookshelf speaker made for use around the house or at the office: the $200 Fluance Fi50.

First off, the Fi50 is a damn good-looking speaker. The overall design is elegant and modern, but still classic enough that it shouldn't look out of place next to nearly any decor. It comes in three color combinations: black ash, dark walnut, and lucky bamboo (which is what my review unit is). The front of each speaker is very clean and simple, with nothing more than a digital display in the center, Fluance logo just below, and the two 5-inch drivers flanking either side. The top houses the controls: display brightness, EQ, and volume controls. All the other stuff is on the back, including power, an auxiliary input, full-size USB port for charging, and pairing button. Most of that is pretty standard stuff, but I do want to talk about the EQ for a bit; this is a feature that you don't see on many modern speakers, and when you do it's generally a simple button that toggles through a few pre-set selections. On the Fi50, however, it's a little bit more versatile: it offers user-customizable options for both bass and treble. Each of the two can be tweaked on a scale of -5 thru 5, so users are able to dial in the sound a little more to their liking. I set the bass on 3 and the treble on 5, as I like a more "open" sound most of the time (and I also listen to mostly rock and metal, which just sounds better with a treble spike to me).

I did find one odd quirk with the EQ, however: it resets back to flat when the speaker is turned off. That means every time you fire it back up and connect, you'll have to set the EQ again. This makes absolutely no sense to me, as there's no real reason this should happen. I kind of hate it. These things are supposed to be simple, and having to reset EQ settings every time the speaker is turned on is just annoying. That's pretty much the opposite of simple or convenient to me.

Otherwise, the speaker looks great and has a nice little feature set.

But really, it's all about the sound quality. 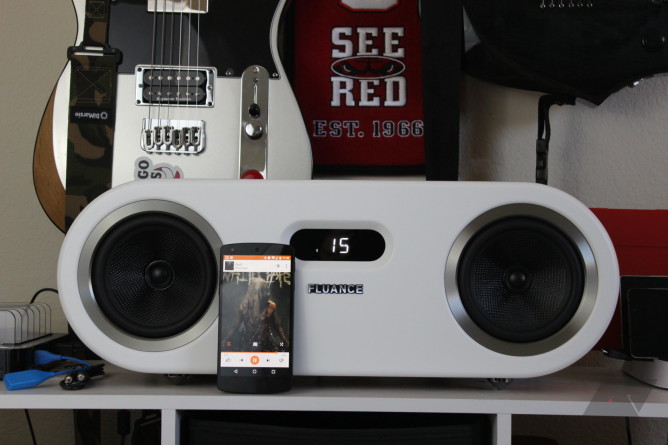 When I first fired up the Fi50, I had high expectations, especially considering its size. In my mind, if the JBL Xtreme — which is basically half the size of the Fi50 — can sound as good as it does, the Fi50 should be amazing. Right?

Actually, I was disappointed at first — I thought it sounded, well, flat. Dull. No real voice. That was before I found the EQ. After some tweaking, however, the Fi50 opened up in a way that really surprised me. It's incredibly responsive to the built-in EQ, which is nice. There's a very defined and audible change with every bump to both the treble and bass, so it's easy to find exactly what you like. And once you get that dialed in, the Fi50 is a damn nice speaker.

That said, it still can't really touch the Xtreme. I get that it's $100 cheaper, and that has to be taken into consideration, but in a straight-up apples to apples comparison, the JBL Xtreme is fuller and more defined across the board. That doesn't mean the Fi50 sounds bad, because it really doesn't by any standard. It just doesn't sound as good as the Xtreme.

All that said, it's worth noting that the Fi50 actually supports AptX, which is a must-have for some users. In theory, this should make tunes streamed over Bluetooth sound better, but it also depends a lot on the speaker's hardware in the first place. Higher quality music doesn't always mean better sound, if you know what I mean.

When compared directly, the difference between Bluetooth and auxiliary on the Fi50 is actually pretty unbelievable — it sounds much better over Bluetooth. It's also quite a bit louder over Bluetooth. Really, it just sounds pretty bad over a wired connection, which is just kind of surprising. 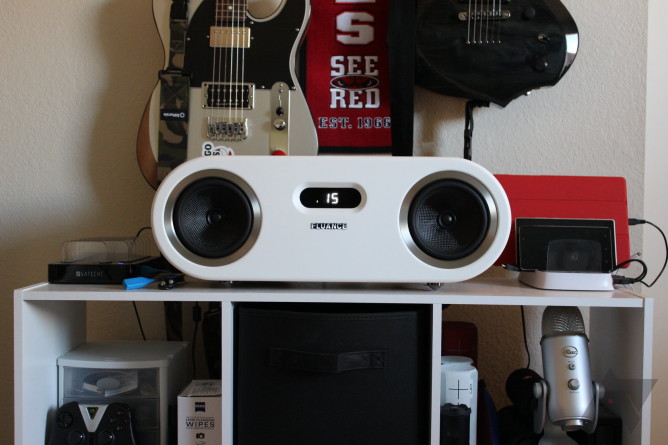 If you've got a couple hundred to spend and you want a good-looking speaker for around the house, the Fluance Fi50 is a great way to go. It's big and loud enough that it easily fills a room with sound, and it's attractive enough that you shouldn't mind it sitting on the shelf for all to see.

The downside, of course, is that it's not really that portable, and it has the weird EQ quirk where it doesn't remember the settings once it's turned off (which is so annoying). Also, when compared to the slightly pricier JBL Xtreme, there's just no contest — for a hundred dollars more, the Xtreme is portable (though still large), waterproof, and sounds better.

For my money, I'd most likely just spend a little bit more for a lot more speaker and go with the Xtreme. If you're firm on a $200 budget and don't care about portability, however, there probably isn't anything much better than the Fi50.

For those curious, I always use the same playlist when testing speakers. If you're interested in checking it out, you can find it on Google Play music. I generally also have one or two albums I can't stop listening to with each new speaker. For the Fluance Fi50, it was basically Whitechapel's entire catalog.
subscribe

Stand At The Center Of The Party, Ride Shotgun, And Be A Creeper On The Beach In This ...