Sony's non-presence in the US smartphone market only seems to be accelerating of late, with the company having closed all of its retail stores in the country (apart from the one on Madison Avenue in NYC), shut down its online shop (it redirects all listings to 3rd party retailers), and cancelled its only known upcoming device. This, alongside increasingly dismal sales performance for Xperia phones even outside America, tends to paint a not-nice picture of the company's smartphone division.

But Sony Pictures lives on, and with it, the blockbuster Daniel Craig Bond franchise. The upcoming 007 film Spectre will, of course, feature a lot of Sony product placement, including the generally well-liked Xperia Z5... which you cannot buy through any official channels in the United States. This places Sony's product promotion page for the movie in the US in a rather odd situation: advertise a phone nobody can buy, or plug something else that they can. Sony, in a perplexing move, has chosen the former. Except it's not the Z5 they chose to advertise, it's the Z3+.

If you head to Sony's UK page of the same name, the Z5 is featured in the text box instead.

The Z3+, also known as the Z4 in Japan, was never officially available in the United States. But, you can at least reliably find one on Amazon (sans warranty) in most available colors, whereas the Z5 is a bit hit or miss in that regard. Why Sony chose to advertise a phone at all on the US Made for Bond website is a bit of a mystery to me, given that no new Sony Xperia phone is really easily obtainable here in America, but this may feel like a bit of a slap in the face to fans of the brand. It's probably due to the fact that the Z3+ is the newest phone featured on Sony's US website, where it is still perplexingly marked "coming soon." 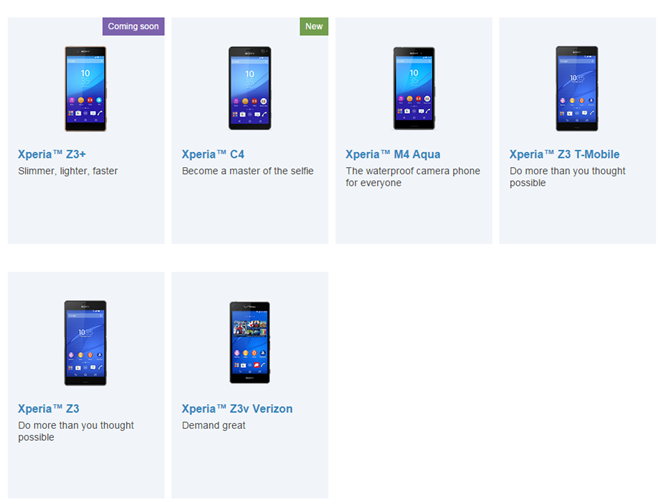 Someone at Sony should probably, you know, do something about this. Because it looks kind of bad.