The thing about Marshmallow is that it added a lot of granular control over your apps, but it did so in such a confusing and redundant way that it kind of made things worse in my opinon. Apps now have their individual properties page where you can control their notifications (despite that being also available in Sound & notification), permissions (despite that being accessible in one list under Settings -> Apps -> cog icon -> App permissions), and defaults and supported links (despite that also being accessible in that same cog setting). It's this last part that we'll talk a little bit about today, but brace yourself, this will be baffling, inconsistent, and unnecessarily convoluted. But what would Android be without some unnecessarily convoluted setting hiding somewhere that only you could find and then fix for all of your stumped friends and relatives?!

Let's start by explaining how app defaults work in Marshmallow. You install app X, which does something similar to other apps on your phone. Say it's a camera app. When you try to perform an action that would usually launch the camera, you'd get asked which app you want to use, Google Camera or app X, and whether you want that choice to be a one-time thing or a permanent one. Up until now, we're clear that this is how things have always worked on Android, right? Cool.

Now let's say you tapped on Always but you're reconsidering your choice, you head into your phone's settings and open app X's properties page to clear the defaults like you always have. You notice that this setting is now tucked away under Open by default -> Other defaults. Not a big issue. The Clear defaults button is still there, so you just tap it and you're ready to go back to square one, where you'd get the Open with pop-up again and can choose Google Camera as your permanent option, or maybe move back and forth each time between it and app X. Aside from that one setting being behind a sub-menu, it's still how Android has always worked. Perfect. 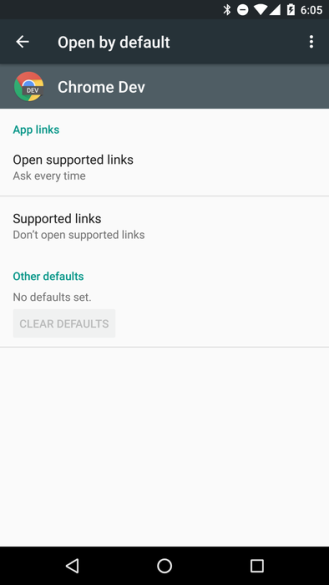 Except when it's not. Because for some stupidly idiotic and impossibly discombobulated reason, Marshmallow has another list of app default settings that you'll have to dig for. Go to Settings -> Apps -> cog icon (Configure apps) -> Default Apps and SONOVA%#%^%$# THERE'S ANOTHER LIST OF DEFAULTS THERE! WH... WHAT?! WHY?! God knows son, God knows. Breathe. Because it's gonna get uglier once we tell you how even more confusing this thing is. 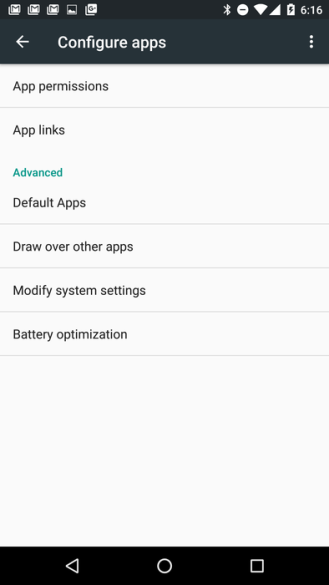 Oh look what I found... another option for Default Apps!

So let's say app X wasn't a camera, it was a browser. Let's say it was Chrome Dev (or Link Bubble, Chrome Beta, Opera, or whatever browser you prefer to use). If you mistakenly picked it as a permanent choice and no longer wanted that, you'd go Clear defaults like we did before and think it was all cool. Buuuuuuut, this is the kicker, it is still the default. Try to click on any link, and it still opens in Chrome Dev. Because that secondary list of defaults, Default Apps under the cog menu, has a Browser item and it still has Chrome Dev selected as the option, even though you did clear the defaults. Ya-ah, iz a doozy. 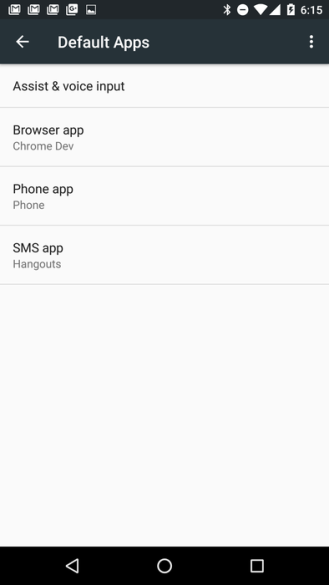 Wait. Didn't I clear your default a few paragraphs above, you sneaky bastard?

Even worse, this Browser setting can't be turned back to none. Once you pick an app as the default, you can only change to another app, but you can't remove all choices. So you can't get the Open with pop-up to show up again to pick between different browsers and make your choice on a case-by-case basis. Your only option to get the pop-up again is to install another browser, disable/enable your third-party app, or uninstall/reinstall it. 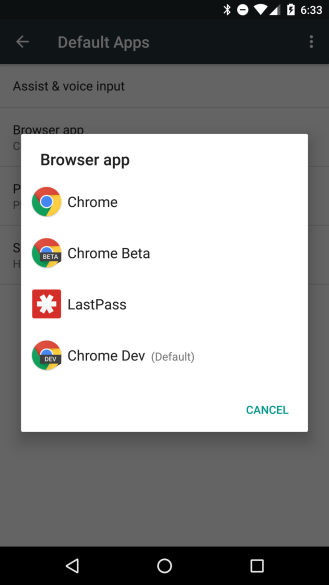 What's even more baffling is the lack of any visual indicator in the app's properties page on whether or not it is set as a default in that secondary menu. So you won't be able to tell that it is still a default there and is holding the action captive, or that it isn't and thus has no chance of showing up in any Open with pop-up.

So let's recap everything that's wrong with this convoluted new defaults system: