People who take online privacy seriously eventually get to the point where they want to experiment with a VPN. Usually this costs money, which puts some people off particularly because the process involves handing over an email address and credit card information. This means that even if you're better protected from prying eyes than you would be if you were VPN-less, the company that supplies the service may still be able to connect the dots.

That's what makes Betternet interesting. Unlike most other options, this service is entirely free to use. That has implications both for your privacy (though you still have to watch out for DNS leaks) and your wallet. And the company doesn't care what you do, including firing up BitTorrent. The Android version isn't new, but we felt all of these things made it worth a closer look. 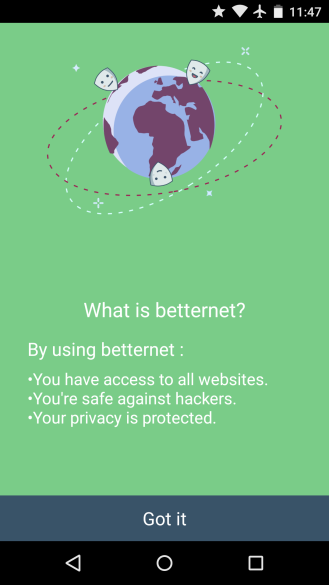 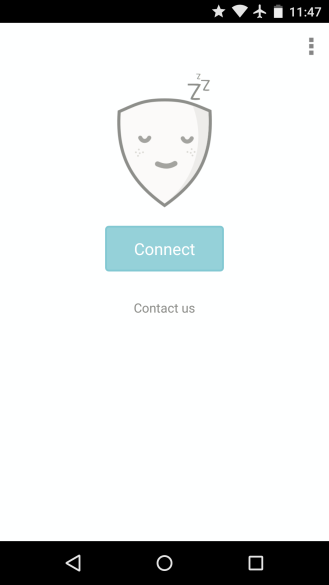 VPN apps aren't generally the most complex, and Betternet doesn't differ from this standard. We're talking about software that you start up and, hopefully, forget.

Interacting with this app consists of installing it from the Play Store, reading the single splash screen, and tapping the Connect button. After accepting the prompt that appears, you're good to go. 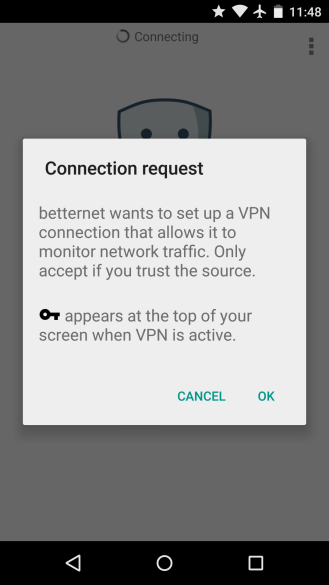 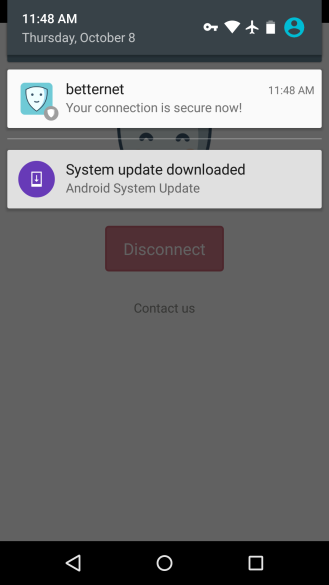 Though you can browse the web as you otherwise would, you will find a persistent shield icon in the notification bar in addition to the key that shows up whenever you run a VPN. You will have to go into your phone's settings and hide notifications from Betternet to get rid of it. 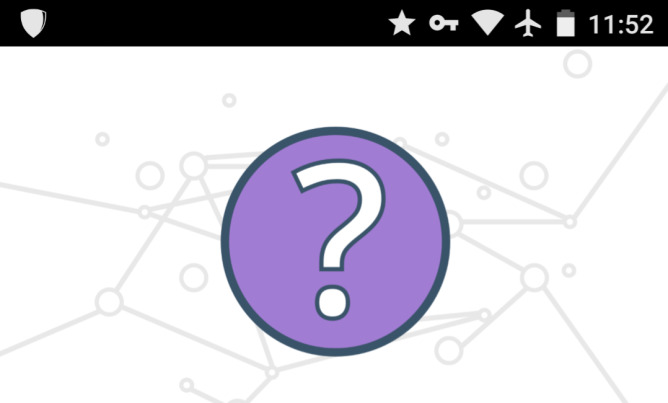 The menu doesn't contain much, but if you click on Desktop Version, you will find the one point where Betternet tries to get your email address. The app says it's just trying to send the download to your inbox, but if you decline, then it just displays a link. This approach may be there for user convenience, but it felt a bit sneaky to me. 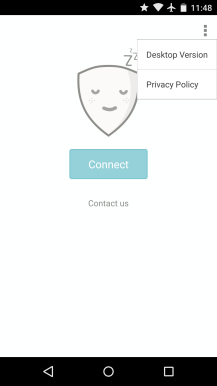 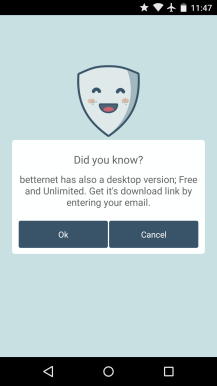 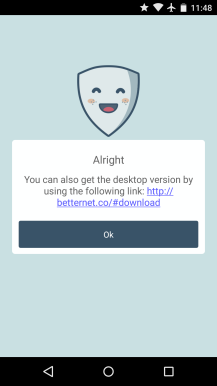 As you might expect, Betternet keeps its servers running using ads. On Android, these take the form of free apps that you can choose to install if you so desire. The company gets a little bit of money every time you do. 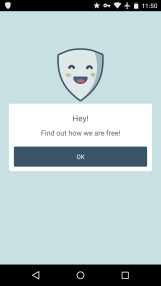 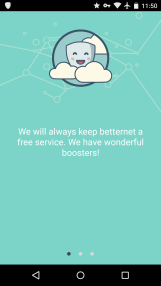 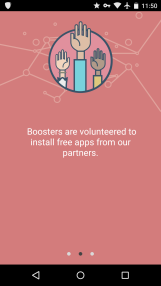 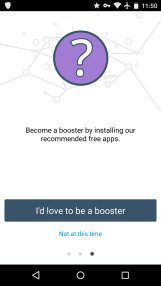 A full-screen pop up appears once you tap the button at the bottom of the homescreen, and I was served the same app each time. Betternet says it may ask you to install apps if you opt-in by becoming a "Booster," which means you will start seeing ads when you fire up the app. 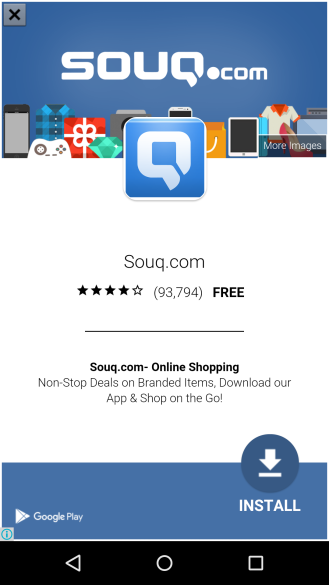 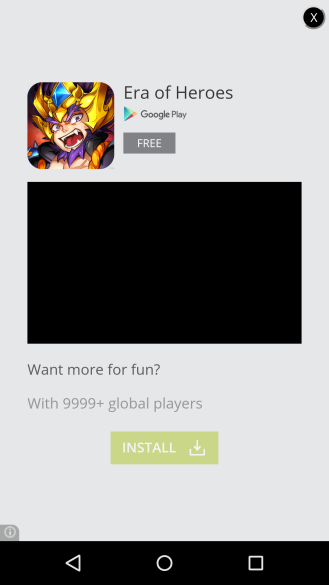 Left: The app I could opt to install from Google Play, Right: The ad that popped up after I became a "Booster."

The use of ads does sacrifice some degree of privacy, but the company appears to be pretty transparent, showing income relative to costs on its website.

Downloading torrents is risky business. ISPs will politely--but-not-really ask you to stop if they catch you downloading copyrighted content. Some users turn to VPNs to get around this.

I don't torrent, nor do I encourage it under most circumstances, so I don't have much experience here. But I can show that after installing Betternet, installing uTorrent, and searching for anime, the VPN redirected my location to a place where Arabic is the predominant tongue. 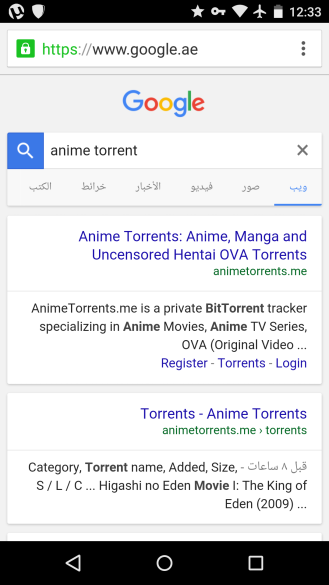 So yes, Betternet does change your IP address. But will it stop you from downloading the file regardless? Some VPNs won't let you because they don't particularly want to deal with the negative repercussions this can bring down on them. Betternet doesn't care and says it will let you torrent as much as you want, but it will still comply with any DMCA takedown notices. Here's what Betternet says about the matter on its blog.

Bittorrent and generally P2P are allowed in our network but if we receive a valid court order then we will comply with that.

If we ever receive a DMCA takedown notice or valid court orders, we fully comply with the notices without disrupting or jeopardizing any clients privacy. As mentioned earlier, we don’t save any logs, IPs, ports, user information or timestamps. Hence, in order to satisfy legal requirements from bandwidth providers we do not disclose any user data to the authorities. So far we have not received any valid court order that has required us to provide something we do not have.

How Fast Is It?

Ah, yes. Here we reach the downside to using a VPN. The act of connecting to another server and redirecting your traffic does slow things down a bit. As you can see from these screens, Betternet generally reduced my speeds by somewhere between 1/4th and 4/5ths. Don't put too much weight behind these numbers though, as Ookla speedtests tend to vary on their own. Speeds are slower, yes, but they're not bad for a free VPN. 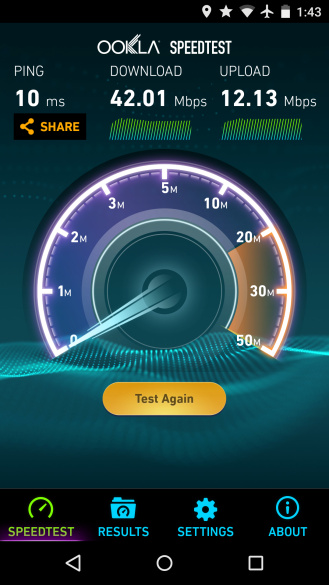 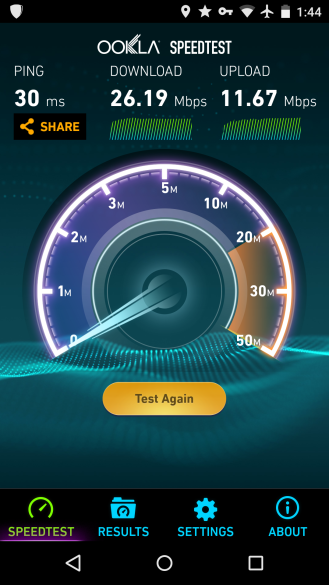 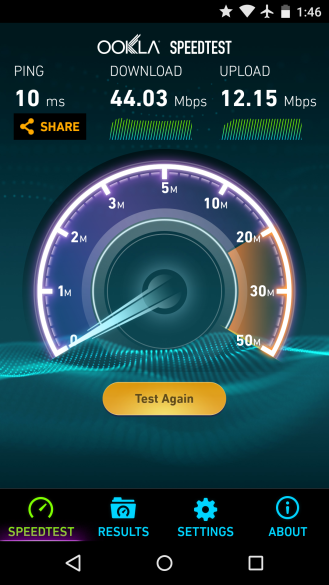 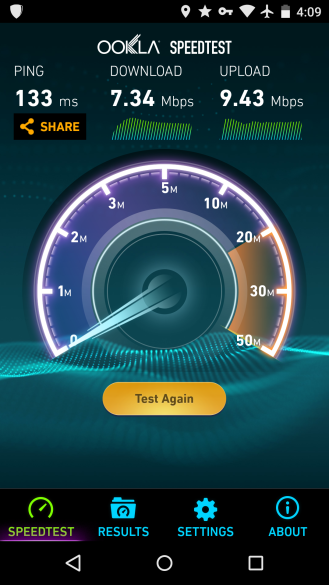 Was this variance noticeable while browsing the web and downloading apps from the Play Store? For the most part, not really. Though it's worth pointing out that, as you can tell, I tested the app out on a rather speedy connection. Still, you can turn Betternet off while streaming video at home, then fire it up when you're checking email at the local cafe.

Betternet is free, and the ads have so far been about as unobtrusive as they could be. If you're looking to experiment with a VPN without having to pay money, or you have privacy concerns with providing credit card information, Betternet is worth a shot. Did I mention it's free?

Not only that, the service is available for Windows as a dedicated program, and there's a Mac version coming soon. Alternatively, you can fire up an extension for Chrome (and Chrome OS) or Firefox. And if you have an iOS device lying around, Betternet runs on that too.

An Open Letter To Motorola: Start Promising A Concrete Period Of Update Support To Your ...