If you own a smartphone and live outside the US, chances are you're one of almost a billion monthly WhatsApp users. WhatsApp may not be the most feature-rich messaging platform, but what it lacks in functionality, it makes up for in rock-solid reliability (hi, Hangouts) and virtually unparalleled market penetration (hi, Telegram). That's why WhatsApp is the de facto messaging app for so many people around the world, even if it still requires things like chat backups — something more characteristic of MSN Messenger than a modern messaging service. Fortunately, starting today (and after many months of adding and removing the feature), WhatsApp will offer to automatically back up and upload your chat history to Google Drive.

Of course, WhatsApp has had a local backup feature for years, but without any way to automatically upload that backup to the cloud, its usefulness was rather limited. If your phone ever got lost or stolen and you didn't have a backup stored elsewhere, your entire chat history would be gone forever. There were ways around this limitation (e.g. using FolderSync to upload backups to Google Drive), but this added a layer of unnecessary complication that very few users bothered going through.

Thankfully, the new process is very straightforward and quick to set up. You can back up your chat logs, photos, voice messages, and now even videos to your Google Drive account. Additionally, since it doesn't rely on Marshmallow's new backup capabilities but instead on a Google Drive API, you should also be able to get it working even if you're part of the 0.2% of users still running Froyo.

Backing up to Google Drive

The setup process is essentially identical to the one we described a few months ago. After updating the app to a compatible version, you'll be greeted with a prompt to configure settings such as backup frequency, Google account, and whether or not to upload videos. 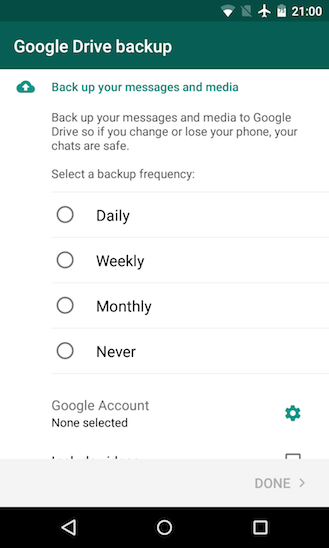 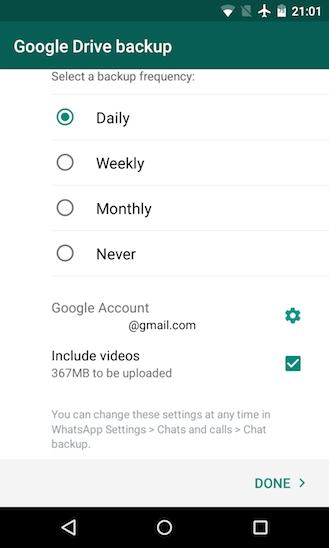 After that, you can choose to manually force an upload of your chats and media, which may take a couple of hours, depending on the size of your backup and the speed of your internet connection. Here, you can also decide to allow uploads using cellular data or restrict them to when you have a WiFi connection. 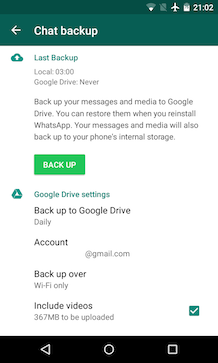 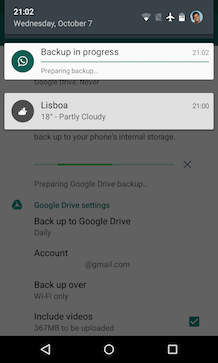 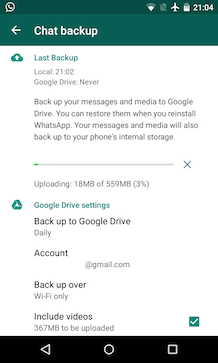 Unfortunately, there doesn't seem to be any way to access your data from within Google Drive, so if you enjoy viewing photos and videos from WhatsApp on Google Photos, you'll also need to back up your media using the Google Photos app.

Restoring a backup to a new phone should also be a relatively painless process. After confirming your phone number, WhatsApp will check your local storage (in the WhatsApp folder) for any backups. If it can't find any, it will check your Google Drive instead and restore your data from there. Thankfully, the message database is downloaded and restored before the rest of your media, so you won't need to wait for half a gigabyte to download before you can begin WhatsApp-ing with your friends again. 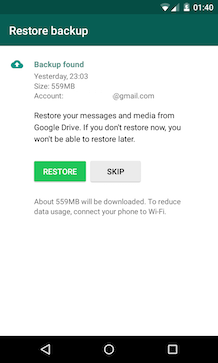 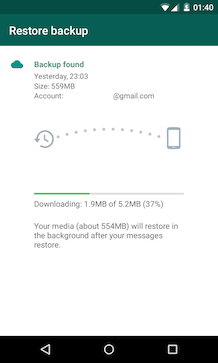 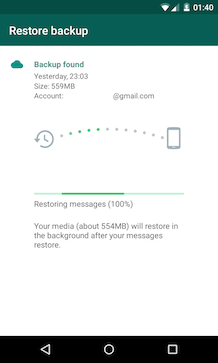 Of course, something always has to go wrong. After a couple of attempts at processing my backup, WhatsApp was unable to restore my message history. It still managed to download all my media, but in my case, the message database appeared to be corrupt and, therefore, impossible to restore. Fortunately, I had another database backed up locally, and I was able to restore everything from there after one more try. 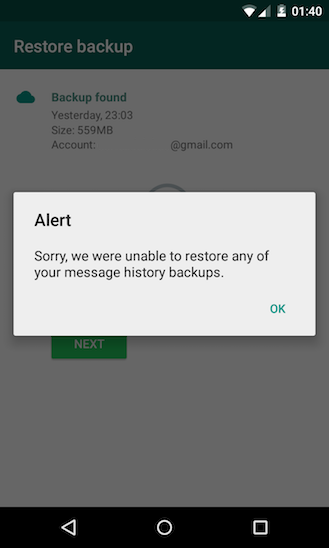 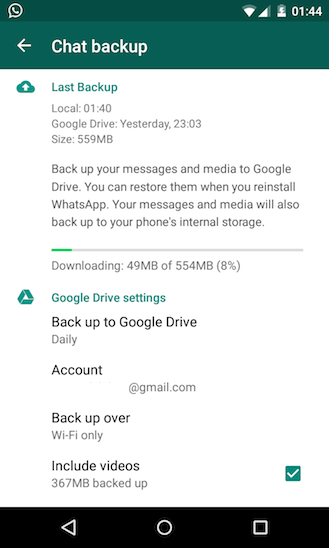 The whole process is definitely an improvement, but there are clearly still some kinks to be worked out. I was only able to get everything up and running after over an hour, and I still ended up using a local message database I had manually saved. Maybe if everyone could just move to Telegram, we wouldn't have these issues... *sigh*

Update (2015-10-09): WhatsApp support reached out to me so they could find out what the issue was. I tried replicating the bug, but unfortunately (or fortunately, depending on how you look at it), I didn't encounter any problems this time and the restore process went through as expected. With any luck, if you ever find yourself having to restore your messages to another phone, the bugs will have been mostly ironed out by then — it's definitely a pleasant experience when everything works the way it should.

The APK is signed by WhatsApp and upgrades your existing app. The cryptographic signature guarantees that the file is safe to install and was not tampered with in any way.

YouTube Creator Studio v1.4 Tidies Up Its Look And Adds A Bunch Of New Analytics