USB Type-C is the future... but the future isn't here yet. Odds are pretty good that most of your electronics still use the Type-A cable standard (the usual rectangular USB port that we've all become accustomed to). So for the next few years, converter cables and adapters will be needed in the same way that we used to need converters between Mini and MicroUSB cable types. Unfortunately, that's going to be the case for the Nexus 5X - the only cable and charger in the box is the reversible Type-C at both ends.

That's in contrast to the more expensive Nexus 6P, which comes with both a Type-C-to-Type-C cable and a Type-C-to-Type-A cable, presumably specifically because it's more expensive. After hearing some rumblings in the community, we asked Google directly about the cables included with the 5X. Here's the official response from a Google representative:

It's also confirmed on this Google support page - inside the box is a C-to-C cable, a compatible wall wart power adapter, a SIM key removal tool, and documentation. 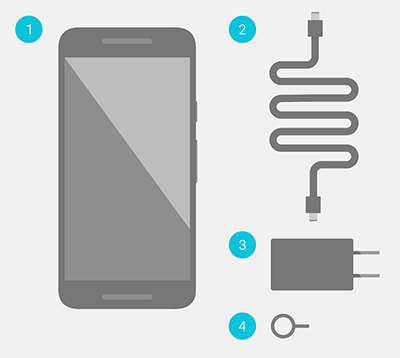 If you don't have any other Type-C equipment, you'll be able to charge your phone from a wall outlet, but that's it - you'll need adapters for charging from a computer or a car, and for syncing data or modifying your phone with a standard PC. Luckily, accessory manufacturers are already creating products that support both Type-A and Type-C plugs. You can find A-to-C cables from electronics retailers like Amazon, Best Buy, and the Google Store now; get in an order quick and it should arrive before your shiny new Nexus phone.

Russia's Anti-Monopoly Agency Says Google Must Alter Its Contracts With Russian Carriers Or ...

[Deal Alert] Amazon Has An Aukey Quick Charge 2.0 Car Charger For Just $5.99 With A Coupon