When you are entering a market where GoPro dominates and Garmin has emerged as a top choice for fitness geeks, you really want to make your product look like a safe bet compared to established competitors. The Bandit doesn’t quite stand out in that way, at least not at its $399 entry price point.

Here’s a quick overview of where we're headed:

To familiarize yourself with the device, here are all the nitty gritty specs. Basic things to pay attention to are the weight, the video recording abilities, and to keep in mind that there is no onboard viewfinder.

The Bandit is an interesting device to look at. Unlike the GoPro and a few of its imitators, TomTom’s new action cam looks very much like a camera. And unlike many in the market, the mounting brackets are built right into the camera, as is an IPX7 lens cover. 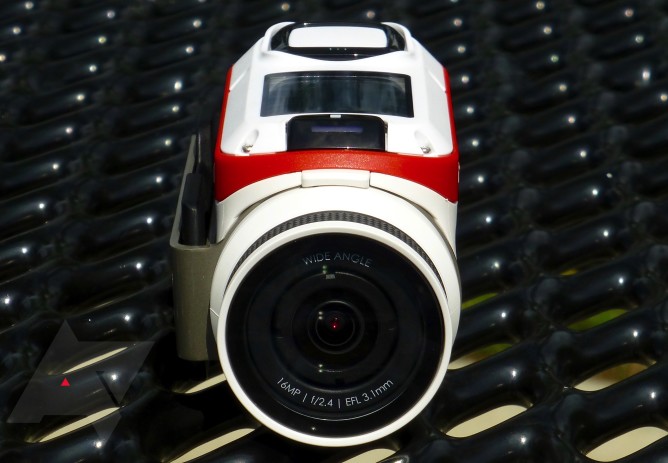 The battery is one of the most distinguishing features. More than just a removable and rechargeable part, it is also home to the microSD reader. To make the camera more water resistant, it is not charged from the outside by default. Instead, when you remove the battery, you will plug it directly into a USB port for charging. If you plan to do very long shooting sessions, you will have to keep in mind that you can’t just swap batteries and go. 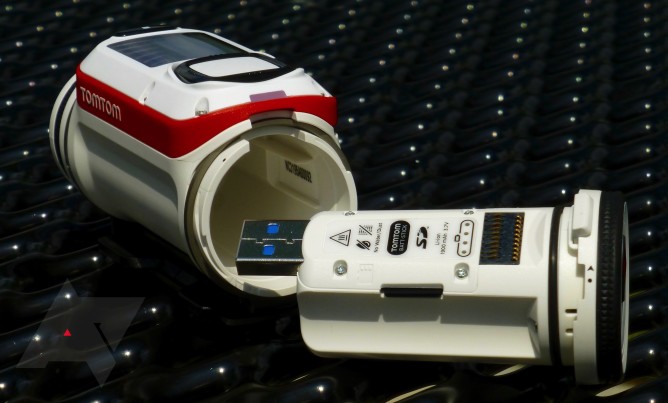 Of course, there are some clear downsides in the overall design. First of all, the Bandit is heavy. At 190g, it is just far heavier than the GoPro Hero4 (114g with mounting frame) or Sony HDR-AS100V (103g with mount)—credit to DC Rainmaker for taking those measurements. On the other hand, the Garmin VIRB Elite is over 200g with mounts. Your interpretation of this info will come down to a couple of things:

The Bandit is a pretty hardy item right out of the box, which is great! Unfortunately, that makes it heavy and gives you no real option for making it lighter. I found that side mounting on a helmet was a terrible idea, as my neck began to ache terribly about 45 minutes into my bike ride. 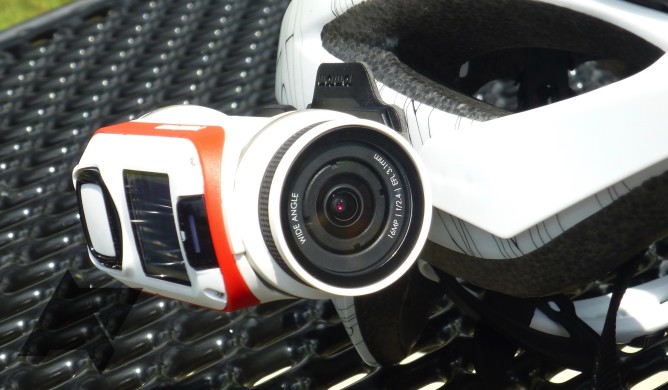 The other aspect of the design that I consider a drawback is the lack of an LCD viewfinder. It must be said that the crude screen allows for the action camera to be natively waterproof (other than the lens, which must be capped to be truly resistant to long-term submersion). TomTom made a logical and defensible tradeoff here, but it is a tradeoff nonetheless. For many users, this won’t really affect the way it is used, so it isn’t something that will be a factor for everyone. In the end, it all comes down to performance. TomTom offers several unique contributions here, which I will highlight to start. First of all, you can interface with the camera from the Bandit Android app. It can act as a viewfinder and it handles video and picture editing if you want it to.

At the conclusion of your adventure, you can open up the Bandit app and shake your phone to prompt the software to compile a little highlight tape for you. I'll talk about that in depth later on.

When you are out filming, you can use the built-in highlight button—or an equivalent one on a sold-separately remote—to mark the points in time you know you’ll want to revisit later. This is a clever and genuinely useful feature that I believe people will appreciate. 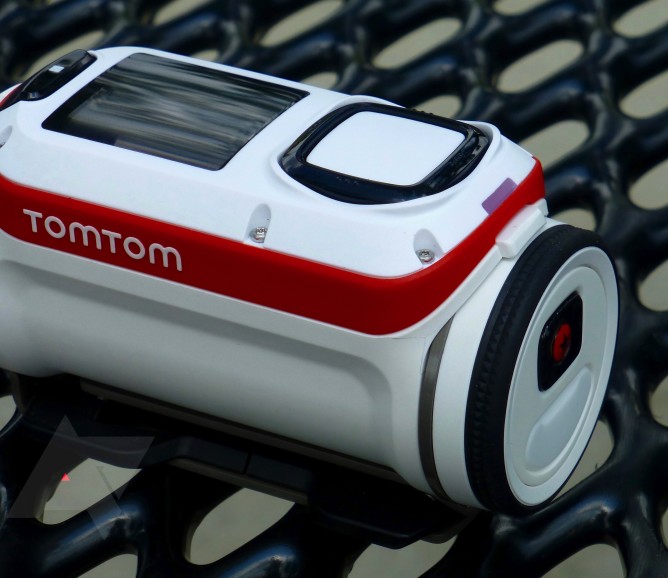 A more subtle aspect is the fact there are two separate buttons for starting and stopping recordings. If you have used action cams that only have one button for this, you’ll have experienced that moment where you aren’t sure if your last press was play or pause and you end up stopping to make sure everything is working. That shouldn’t be a problem with the Bandit.

The downside here is that, without the sold-separately 360 rotation mount or a bar mount, I could not find a place to put the camera that didn’t include some portions of my helmet and/or face. For mounting to my helmet, it needed to be just a little bit further from my head to avoid this problem, which would be accomplished with the better mount. 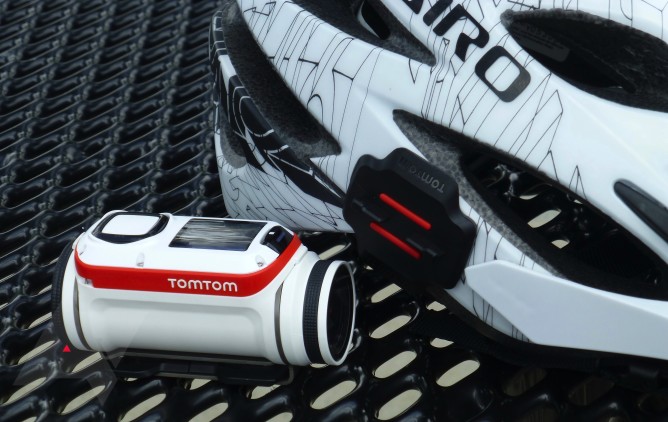 The best place to mount it for avoiding including too much of me in the shot was on the side of my helmet. I tried 3 different helmets and various versions of side, top, and sorta-side/sorta-top positions and settled on the one you see above. There was a big downside, though; it really knocked my head off balance the entire time I used it.

I actually just took it off about 45 minutes into my longest ride with the Bandit because it was getting too uncomfortable for my neck. This is where every ounce matters, though it could have been alleviated if I was willing to have a worse looking video or had the separate mounting kit (I could have had it on the very top of my head).

The recommended method for looking at and sharing/saving your photos and videos is through the Bandit app, which is available on Android and iOS. You can just use any old card reader to get the raw files, though.

One of the key benefits of using TomTom’s app is its ability to use sensor information to decide which parts of your video are the most interesting. By shaking your phone (or just pressing a button), it will create a video in the neighborhood of 1–2 minutes with its best guess at optimal highlights. It does a pretty good job here and I think it’s one of the best parts of the experience. 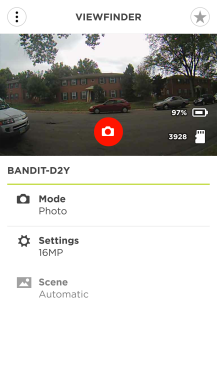 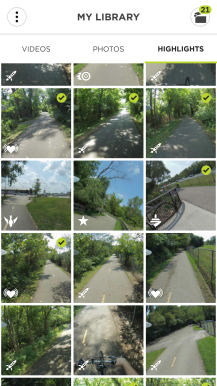 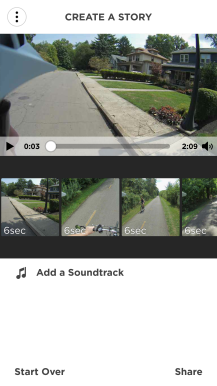 You can also browse through pre-sorted highlights to edit TomTom’s creation or start from scratch for your own. There are small indicators which let you know what information the Bandit app used to decide a particular 6 second clip was interesting. This can be raw speed, changes in speed, sudden up/down motions, fast heart rate, and a few other things as well. In the iOS app, you can overlay your heart rate, speed, and some other metrics in the videos; this feature hasn’t made its way to Android yet.

Below is an auto-generated highlight reel of my day hitting a local trail on my hybrid road/commuter bike. It isn’t exactly action-packed, but is probably more along the lines of typical use than many would like to admit.

The reason there is music playing—beyond the fact the Bandit app graciously supports adding a soundtrack—is that the internal microphone produced some truly terrible wind noise.

Overall, the video is pretty good. This is 1080p at 60 frames per second, which I think is the best setting for quality output while moving pretty quickly. There are several places where rapid changes in lighting and head movement could have produced some pretty useless shots, but the Bandit always managed to adjust on the fly to changing conditions. As a camera, I’m really happy with it.

Here are a few stills from a walk around my neighborhood. In the case of still photos, it is not as great. This is mainly because you can’t tell the Bandit what to focus on and you are forced into wide-angle shots that aren’t what you probably want. If you have the time to take stills, you are in all likelihood better off just using your phone’s camera. This was a cloudy day in the late afternoon and you can see that the Bandit kind of chokes on the low lighting situation. In general, I am not a fan of the fisheye effect that you are bound to get with the wide angle for still photos.

I did enjoy the Bandit. If I decided to go out and buy an action camera today, though, I can't say for sure that this would be it. Its price pits it against the GoPro Hero4 Silver, which is much lighter and therefore more versatile. On the other hand, the Bandit is quite hardy and is at least a worthy competitor when it comes to video quality, if not superior for some use cases. Using the Bandit app is mostly a great experience, but it does not completely make up for the lack of a real on-device viewfinder for me.

Overall, though, I'd happily buy the Bandit if I was upgraded to the premium version, that includes nearly all OEM accessories, for free. In the real world, though, it costs an extra $100 (which is much cheaper than buying each separately, for what that's worth). If the price comes down, you will definitely want to think about getting it. Likewise, if the drawbacks on the Bandit just don't matter for how you want to use it, then you may really love it.

Even if you are a little bit scared away from the Bandit, you should keep your eye on TomTom if you are in the market for an action camera. If this qualifies as a rocky start, then I'm excited to see what is to come.

Buyer's Guide: Should You Upgrade To The New Chromecast? (Short Answer: Probably Not, Unless ...