OnHub is Google's attempt at a router that's easy to set up and, unlike most others, pretty enough to leave out in the open. But it could be prettier. Rather than roll out new hardware this early in the game, Google seems to be interested in producing new cases—or shells—to replace the blue one that comes with the device.

At least one person has completed a Google Opinion Rewards survey (Google's way of acquiring user feedback in exchange for Play Store credit) asking questions about the OnHub. Particularly, would you be interested in purchasing one of three potential shells, and what price would you consider reasonable?

The three options are Bamboo, White & Gold, and Black & Silver. 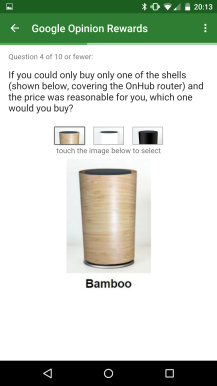 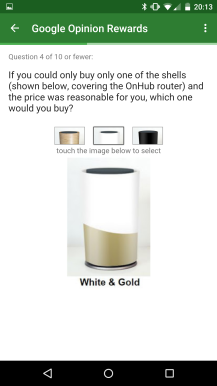 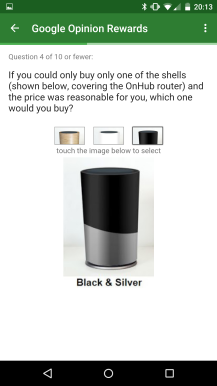 Of course, how much you're willing to pay for a case depends on whether you're on board with the OnHub concept in the first place. Check out our review if you're undecided.

As for us, we'll contemplate how nice the white and gold OnHub would look in the kitchen.