You know what drives me crazy? Trying to hold my phone and use it for navigation while driving. Or putting it in my lap and glancing down every few seconds. Or trying to put it in whatever car dock I'm using at the time. Or getting the "perfect" car dock, then getting a different phone that no longer fits said car dock.

Ugh. You'd think we have this stuff figured out by now.

And honestly, I think Spigen actually may have with its new Stealth Car Mount. It fits phones up to six inches — with or without cases — at two different viewing angles, is easy to drop the phone into with one hand, and has an adhesive on the bottom that adheres it to basically any dash. 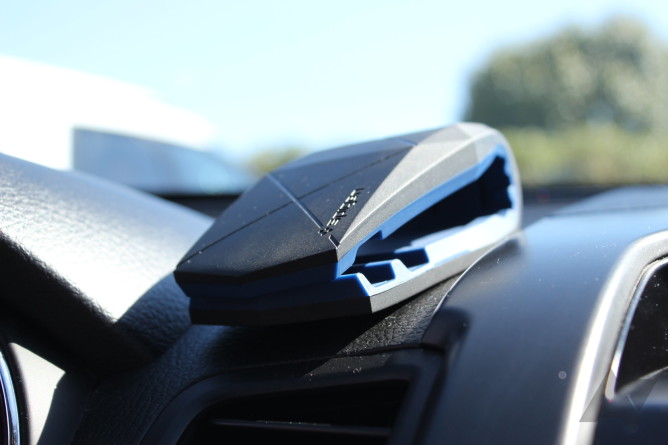 First off, it reminds me of an alligator mouth. Or crocodile. Or hell, even a duck. Whatever you want to think of it as — something with a long, beak-like mouth and/or snout. That's what this dock looks like to me. No fancy arms, bands, or other junk to try and stuff the phone in. Just a solid piece of Thermoplastic Polyurethane that opens wide and doesn't break. Super flexible, super strong, and easy to use; I don't know about you, but that's pretty much how I like my car docks.

It also has two slots for positioning the phone at different angles, one just a little more dramatic than the other. I have found approximately zero use for the more upright angle, but I guess it probably has a lot to do with what kind of car you have, where you position the dock on the dash, how tall you are, and that kind of stuff. For me, though, the back slot works best…but we'll talk about that in more detail down below. The bottom of the dock features a sticky gel pad that — you guessed it — adheres to the dash. Spigen claims that it will work on both curved and flat dashes, and while the dash in my car is fairly flat, I'm inclined to agree with that after messing with it a bit. It's also quite sticky, as I've had it in my vehicle for nearly two months now and it hasn't come loose at all. That's pretty impressive, especially considering how hot the inside of a car can get in the absurd Texas heat during August. It doesn't seem to be affected by the upward pressure required to insert/remove the phone either — once you put it in place, it pretty much just stays there. That's one of the most important aspects of any car dock if you ask me, because the last thing I want is my phone to come flying off the dash when I'm driving around a curve…or anywhere else, really.

The Stealth Dock is so stupid-easy to use that it requires little-to-no explanation. You clean the part of the dash where the dock will be placed, and stick it there. That's literally it. Once it's in place, you can quickly and easily toss your phone into it by lifting up on the top and sliding the phone into the grooves. Done. 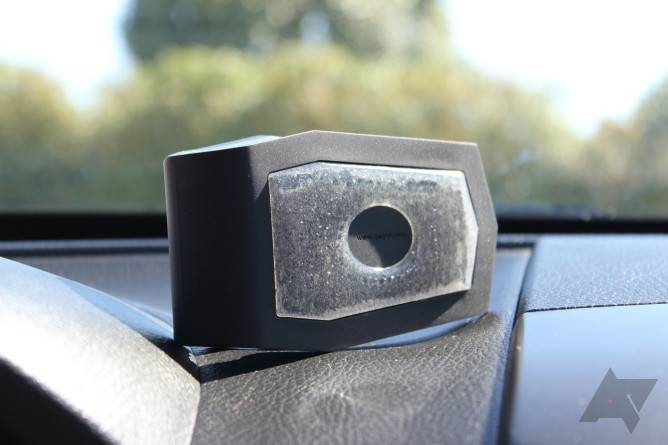 My biggest complaint about using this dock doesn't so much have to do with the dock itself as much as it does my phone (Nexus 6) — the buttons get in the damn way. Since the dock can only hold the phone in landscape position, there's very little room for it to clamp down on the phone without hitting at least the power button. Now I realize that this is sort of a "perfect storm" scenario — it's a combination of the way I have the dock positioned in my particular vehicle (a 2013 Kia Sorento) along with the type of phone I'm using. But still, it's kind of annoying to have to be super careful of how the phone is positioned every single time it's dropped into the dock, otherwise the display turns off. I also tried rotating right and putting the phone in "backwards," but then the power button hits the raised part of the dash (just to the right of the dock in the pics) which also turns off the display. How annoying.

The only other thing worth pointing out is something that's true of almost all docks (at least the ones I've used): if it's hot outside and your phone is in the dock on the dash, you better believe it's going to get hot. There was more than one occasion (and by that, I mean like two) when my N6 just decided it had enough and stopped working altogether. Of course, it was streaming music from Google Play Music and running navigation in Google Maps, so the heat just set it over the top. I think that's more of a Texas problem than a dock or phone problem, but it's still an annoying problem and one that I'd be remiss to not mention. Otherwise, I love pretty much everything about the Stealth Dock. I think Spigen did a really good job of making a simple, usable, and downright awesome car dock. I honestly can't see myself using a different dock at this point — this one solves the majority of the issues I've ever had with car docs before: it's minimal, so it stays out of the way; it's super easy to use, even while driving; and it holds the phone securely so you don't have to worry about it flying from the dash. As a bonus, it's perfect for those who live in states that don't allow window-mounted docks.

[WTF] Motorola Marketed The Moto E 2015 On Promise Of Updates, Is Now Apparently Ending Them ...